Aaron Nardi is a photographer and cinematographer based in LA. As a fan and practitioner of MMA, Aaron makes it a point to add as much MMA into his travels, documenting it along the way. 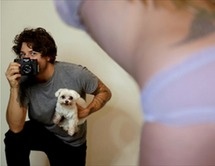