Aurora is a freelance writer from Anchorage, Alaska, currently rambling around the country in a fifth-wheel trailer. She's into cheap travel; exploring weird places; hanging out around rocks, trees, and water; and digging into the minds of fighters. 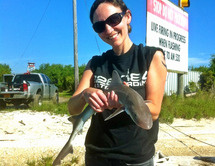