Charlie Gilmour is a London based writer and fair-weather fighter. 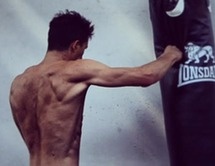