Eugene S. Robinson is the singer for Oxbow, as well as the author of 'FIGHT: everything you ever wanted to know about ass kicking but were afraid you’d get your ass kicked for asking' [Harper Collins] and the novel 'A Long Slow Screw.' His work has appeared in 'Hustler,' 'Vice,' 'GQ,' and 'Grappling,' and on BloodyElbow.com. Photo by William Lacalmontie 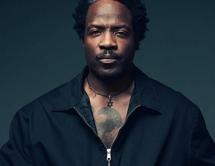