After receiving a Muay Thai scholarship to train at a prominent gym in Northern Thailand, Watthanaya packed her bags at 19 and left home with a one way ticket. She ended up at a Bangkok street gym affiliated with Sor. Thanikul and married one of the fighters. They took off up country and Watthanaya fought her way through Issan. Now, with a degree in tote, and a seven year old daughter, she is running a non-profit Muay Thai gym with her husband in his village. 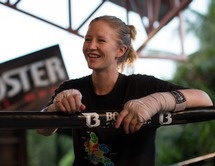