James Goyder has been based in Thailand since 2007 and travels all over the region to watch Muay Thai, boxing and MMA. His articles have appeared in numerous newspapers, magazines and websites. 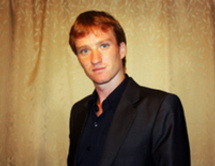