Jim Genia has been covering the sport of mixed martial arts since 2001, has been cageside for thousands of fights, and is the author of 'Raw Combat: The Underground World of Mixed Martial Arts.' 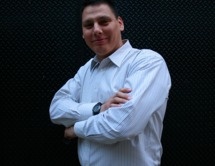