Liam is a former professional fighter turned Coach, Journalist and Screenwriter. Originally from South Africa, he is now based in Sydney where he runs the VT1 Academy with his brother, Dylan. His work and travels have been featured in Blitz, M2, Vice, Mens Health and the Joe Rogan Podcast. 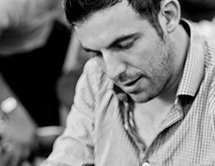