Tom Taylor was born in Ottawa, went to university in Halifax, and now lives in Vancouver. He writes about combat sports and the places he’s been. 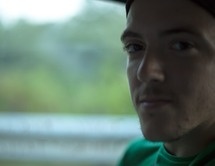