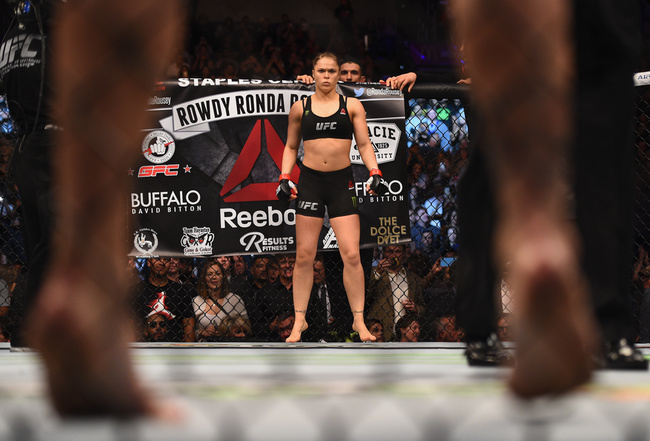 I’m not sure if you guys heard, but Ronda Rousey successfully defended her women’s bantamweight championship against Cat Zingano via armbar in just 14 seconds at UFC 184 last weekend. It was a devastating performance. A slick display of her skills, killer instinct and dominance. It was also the fastest and most dominant match of her career, undercutting her former fastest and most dominant match (0:16 against Alexis Davis at UFC 175) by two whole seconds. It was also the fastest submission in a title match in UFC history.

When a highly anticipated title match happens so quickly, and when there are only 14 seconds of action to pour over in all of the post-fight analysis, it leaves people scrambling to to find new ways to talk about what just happened. One of those ways was to try to put the blink-and-you’ll-miss-it bout into some kind of context in terms of time. The fight, we soon learned, was short enough to upload to Instagram in its entirety. Some people pointed out that it took longer for Bruce Buffer to introduce the fight than for the fight itself to happen. About 99 percent of writers who recapped the event pointed out that it probably took them longer to try to describe Rousey’s armbar than it took her to execute it.

Really, though, almost everything that has happened in human history is, or was, longer than Rousey’s latest title defense/ step on the path to world domination. Coming up with examples is a relatively easy task: Every other fight on the card. Every other fight in her career (albeit not by much most of the time). The average movie. The average lifespan of a human. The Jurassic period.

Perhaps a better challenge would be coming up with the opposite. What is shorter than the Rowdy one’s last fight? In the UFC, a handful of knockouts and Oleg Taktarov’s UFC 6 sub have been faster. When it comes to the sports world outside of the octagon, there’s not much more.

We did, however, come up with 10 sports-related happenings that clocked in under the 0:14 mark. Here they are:

Hometown team South Korea gave up the first of three goals to Turkey in the third place play-off match at the 2002 FIFA World Cup just 11 seconds into the football game and never quite recovered from it. The final score was 3-2 for Turkey.

Jamaican sprinting sensation and Olympic star Usain Bolt set the current world record at the 2009 World Championships in Berlin. He set the adorably slow Olympic record of 9.63 at the London 2012 edition of the competition.

9 seconds: The shortest overtime in the history of the Stanley Cup playoffs.

On May 18, 1986, Brian Skrudland of the Montreal Canadians scored against the Calgary Flames just nine seconds into overtime, earning the win for his team and ending the shortest OT in NHL playoff history.

A promising young boxing prospect named Mike Tyson earned the fastest KO in the history of the Junior Olympics—and the fastest of his career—when he knocked his opponent out in just 8 seconds into the first round in 1982.

On January 16, 2006, fighter and future striking coach Duane “Bang” Ludwig knocked Jonathan Goulet out at the 6.06 second mark of the first round. The recorded time for the match, according to the NSAC, who oversaw the fight, ended up being 11 seconds due to a snafu on their part, but the UFC officially recognizes the shorter time as the fastest KO in UFC history.

5 seconds: The fastest match of The Rock’s career.

The People’s Champion laideth the fastest predetermined smacketh of his pro wrestling career down at the five second mark of his impromptu match again The Big Bossman at Survivor Series 1998. Technically, it’s the second shortest match in WWE history, next to some bizarre clusterfuck that involved Chris Jericho, Jerry Lawler, Tazz, and Mideon.

4.12 seconds: The fastest 40-yard dash in the history of the NFL Combine.

Auburn prospect Bo Jackson ran the 40-yard dash with a reported time of 4.12 in 1986, the fastest in the history NFL Scouting Combine. (The fastest recorded time since the introduction of electric timing in 1999, though, is the paltry 4.24 time run by Eastern Kentucky’s Rondel Melendez that same year.)

According to Mastering Judo, Masao Takahashi’s 2005 manual on the sport, the fastest ippon in Olympic judo history likely happened at Barcelona in 1992 when Cuba’s Andres Franco (86kg) used morote-gari over his opponent from Zaire in just three seconds.

When Blackpool teen Connor Bailey knocked his opponent out in just two seconds during a tournament in Widnes, England in 2014, The Mirror – and his dad Russ – speculated that it might be the fastest in TKD history. “I’m certainly not aware of a faster knockout and I don’t see how it would be possible,” Russ told the paper.

1.8 seconds: The fastest knockout in kickboxing.

On November 11, 2009, Australian kickboxing hero Ian Jacobs earned the fastest KO in kickboxing history when he knocked out The Headhunter with a devastating flying front kick in just 1.8 seconds.