12 Years at Tiger: Insights from the Head Trainer of Thailand's Biggest Gym 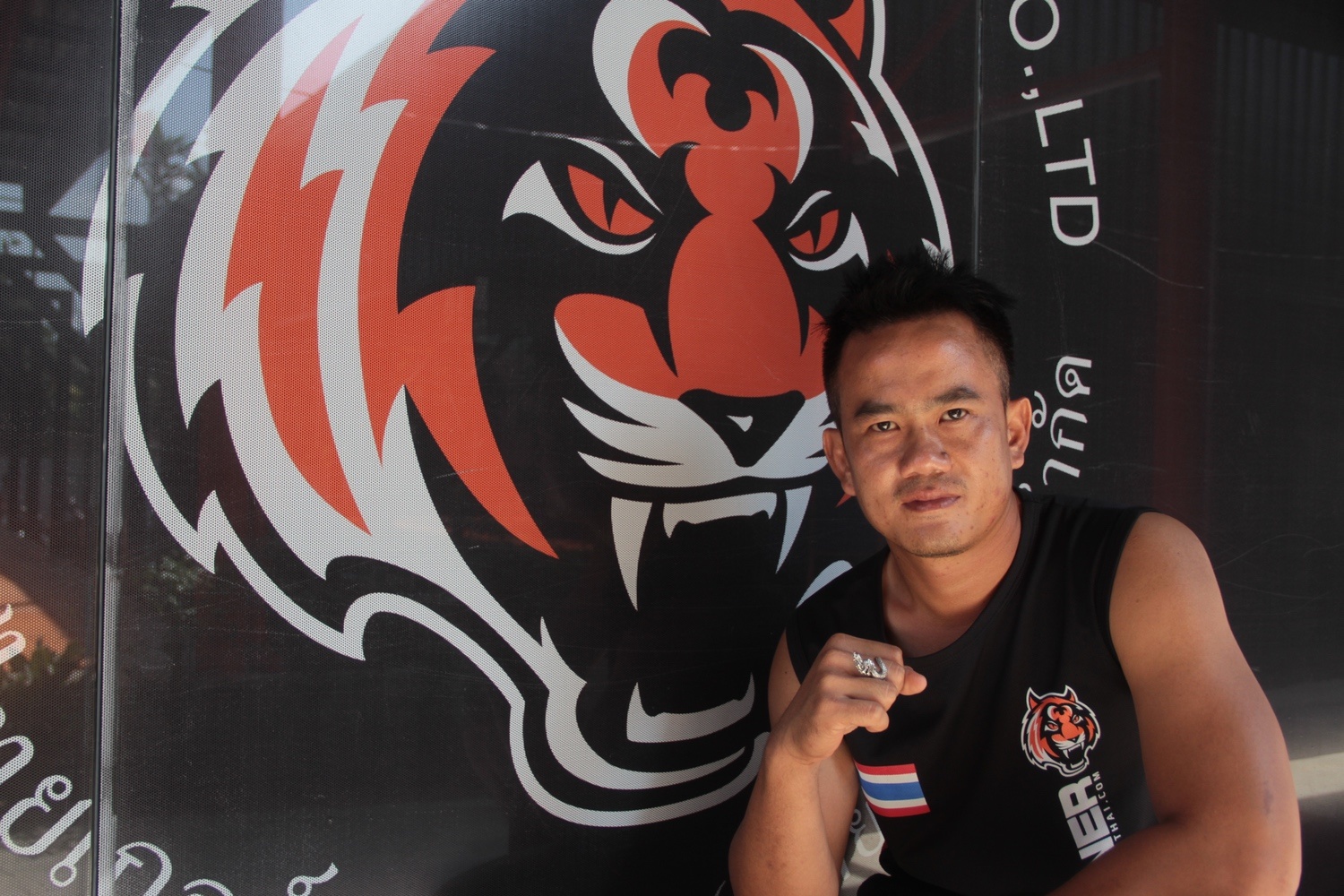 When Piyanat Chaimanee, better known as Phet, first began working at Tiger Muay Thai, rain often leaked through the palm frond roofs. The students, only three or four of them and all personal friends of the gym's original owner, would follow their trainer's lead on rainy days, wondering whether Phet would finish the session or call it off early.

Then in his early twenties, Phet was a veteran of about 70 fights, having retired from Muay Thai at age 18 to pursue a college education. His students respected him—he was young, but he was a skilled fighter, with a multiple amateur Muay Thai tournament medals to prove it. Moreover, he was a conscientious teacher. His students enjoyed training with him, and told their friends.

Soon Phet had five students, then six, then ten. The little gym known as Tiger Muay Thai was growing.

Twelve-plus years later, Phet is in his mid-thirties with a family of his own, and is still at Tiger Muay Thai. Tiger's roofs rarely leak anymore. Metal has replaced palm fronds. The once quiet area is now a major destination for martial artists and fitness tourists. Hundreds of students pass through Tiger Muay Thai everyday. Phet, Tiger's first trainer, now oversees dozens of trainers spread across the mega-gym's campus.

Despite his background as a Muay Thai fighter in his youth, Phet never expected he would become a professional trainer, much less the head trainer of a major brand and business like Tiger Muay Thai. After leaving Muay Thai at age 18, Phet assumed he would work in the hotel industry after finishing his studies in business and English. The post-college job search was tough, though, and Phet found no luck with local hotels. Discouraged, Phet decided to visit his uncle, who was working on a new construction project in a quiet area of Phuket. Phet was surprised when his uncle told him what they were building: a Muay Thai camp. He was doubly surprised when his uncle informed him that an American was funding it.

Phet laughs when he remembers first hearing about it. "I said, 'Really? A foreigner is building a Muay Thai gym in Thailand?!'"

Phet introduced himself to the founder, William McNamara, and asked if McNamara needed a trainer. Phet was hired on the spot.

As the gym grew, Phet took on more responsibilities. He collaborated with McNamara to design a training program to accommodate the increasing number of students and their individual needs. One of Phet's most basic, yet most effective, suggestions was to divide the students into different levels. Beginners and intermediate students were placed in one class, with advanced through professional fighters in another. The division helped noticeably.

It continued this way another three or four years, until the gym's population grew enough so that Phet saw the need to divide the students once again. Four levels were instated, the same four that exist at Tiger Muay Thai today: beginner, intermediate, advanced, and competitive fighters.

Now a decade later, Phet still trains the occasional student, but his position requires him to focus elsewhere. "Most of the time, I have to train my trainers," he says. As head trainer, his daily duties involve monitoring Tiger's multiple classes, observing the dozens of trainers, and settling any disputes that may arise. "I come here everyday and check out the classes, and if something goes wrong, I have to [fix it]," he says with a cheerful smile.

Phet may come off as easygoing and friendly, but he takes his work seriously. "This job has a lot of responsibility," he says. "Every problem that happens here is [my] responsibility. Trainers, training, fighting. Everything."

In a facility as large as Tiger, there are always problems for Phet to solve. Issues arise daily. The matters are usually minor, like this common scene: Two foreign students, perhaps new to Muay Thai, are sparring together. Inexperienced, unfamiliar with sparring practices, and unable to control the force of their strikes properly, the students trade increasingly heavy blows. Tempers flare, ego gets involved, and soon the sparring match escalates into a full-on fight. At this point, it's up to the trainers, and head trainer Phet, to step in and halt the sparring session. "I break up fights between foreigners when they're too angry," Phet says. "I have to help them calm down. I tell them, 'Maybe tomorrow will be better.'"

The problem of sparring too hard, too emotionally, is not something Phet runs into when dealing with native Thai fighters. "The Thais do it differently. They know how to stay safe with it," he says. "Sparring looks like it hurts but [Thai fighters] can safely stop and control it. Many foreigners don't know how to control their power." Phet believes it's a simple matter of experience. Thai boxers often begin training as children. They grow up in the sport, learning from a young age physical awareness, body control, and acceptable gym behaviors. Many foreign students in Thailand's gyms, on the other hand, discover Muay Thai as adults. For a large number of Tiger's students, their first exposure to Muay Thai is in a beginner's class at that gym.

For Phet, the biggest challenge of his job as head trainer is not breaking up sparring sessions gone bad, but is, as he puts it, "controlling the trainers." All the trainers are former fighters, thus many of them haven't had the opportunity for higher education, Phet says. Additionally, "Some of them have fought too much and it affects them." As Phet says this, he mimes being hit in the head.

Phet understands and empathizes with his fellow Tiger trainers. After all, he himself was a both and a fighter and a trainer, and continues to coach some of his old returning students. But Phet took a different route than most fighters when he left Muay Thai to pursue his studies. He may lack the stacks of belts from top stadia that so many other Tiger trainers boast, but he has worked to develop his teaching and leadership abilities.

As well, championship titles do not indicate a competent teacher. Does Phet often encounter excellent fighters who prove to be sub-par trainers? "Sure," he says, without hesitation. He's known quite a few. "Like many of the trainers I find in Bangkok, they're very famous and have titles, but they don't know how to teach customers to be like them. They just kick, kick, kick," he says, waving his hand back and forth. "They can do it themselves, but can't show their customers [how to do it]."

So what does Phet do in that case? How do you teach someone to teach? He works with them slowly, tries to pass along skills he's learned over the years from both firsthand experience and from observing the teaching styles of scores of other trainers he's supervised. It's a slow process, and Phet is forgiving and patient, so long as the trainer abides by the gym rules. "Everywhere has rules," Phet says, "If someone shows up to work drunk, for example, then we give them a warning. After three warnings, they're fired."

Phet doesn't often have problems with trainers. "It's very organized and professional, and I like working here." As head trainer, Phet is a large component of what has kept Tiger running since its inception in the early 2000s. Founder William McNamara, who hired Phet so many years ago, calls him the "heart and soul of Tiger Muay Thai, and a wonderful friend [who] deserves recognition."

Thousands of clients and scores of employees have passed through Tiger Muay Thai over the years, but Phet is one of the few constants. Does it surprise Phet how big this formerly little gym has become?

"Tiger Muay Thai is like my house. It's like if my house had a big family living in it, but I feel like it's still my home. I've seen it grow since the beginning."

After a pause, he adds, "I think every camp in Thailand is like a family."

New Guy in Town: A Conversation with the Managing Director of Tiger Muay Thai