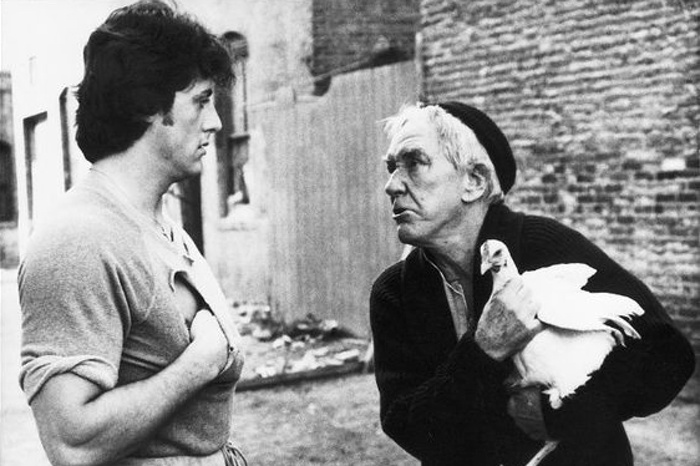 On December 3, 1976, a relatively unknown movie called Rocky opened in theaters across the United States. Much like its protagonist, it was an underdog. Writer and star Sylvester Stallone risk his career, his savings, and even his dog to fund the film. And while it was received generally favorable reviews, the outlets that didn’t like it, including TIME Magazine and The New York Times, were downright sneering in their disapproval.

In celebration of Rocky’s 40th anniversary, we’ve put together a list of 40 things that you can do to celebrate the man, they myth, and his pet turtles (who were also survivors). Here they are in no particular order:

Yell “Yo, Adrian!” a lot. It’s a fitting celebration of endurance and achievement.

Watch the original Rocky again. Either at one of the anniversary screenings that have been happening across North America this year or by ordering the new 40th anniversary collection that was released in October.

Play the new Rocky mobile game. As far as we can tell it’s like Kim Kardashian’s wildly popular product, but with boxing and Rocky.

Sing “Eye of the Tiger” at karaoke. Survivor’s Rocky III theme song is an undeniable hit at any karaoke bar. If you’re shy, you can stay at home and sing along to this instead.

Sing “Burning Heart” at karaoke. While not nearly the breakthrough classic that “Eye of the Tiger” was, the Rocky IV theme, also by Survivor, is sure to charm at least 1-3 nerds at any karaoke bar worth its salt.

Recreate the famous Rocky stair run. Sly probably won’t be waiting for you at the top like he was for these tourists, but it’s still a worthy endeavor.

Visit the Rocky statue. It’s at the Philadelphia Museum of Art.

Buy your own Rocky statue. Seriously.

Read TIME’s original Rocky review. “And though Stallone has a certain power, he is certainly not the subtlest actor to crawl out from under Marlon’s overcoat.” - TIME critic Richard Schnickel.

Then read Ebert’s account of watching Rocky II with Muhammad Ali. Just a couple of GOATs watching a movie together.

Read this brand new interview with Rocky composer Bill Conti. The man behind the legendary score reflects on the original film in this two part interview.

Work out while listening to said score. What better way to start getting stronger?

Read our own assessment of all of the training techniques used in the various Rocky training montages. For the record, we did not include chicken chasing in our assessment because that technique did not appear in the montages. It had its own moment in Rocky II.

Chase a chicken. The training method is an enduring classic.

Or sit back and watching this toddler train like Rocky instead.

Run Rocky’s entire 50k route. A group of ultramarathoners managed to pull it off in 5 hours in 2013.

Watch a montage of Rocky montages. Yo dawg, they heard you liked montages, so Yahoo put a montage in your montage.

Check in on how Rocky is perceived in his hometown. The Philadelphia Inquirer reported on that relationship last month.

Pour one out for Tony Burton. The boxer/actor who played Tony “Duke” Evers was one of the many beloved stars who passed away this evil year.

Further sadden yourself by reading up on Rocky’s chances of survival in the real world. Thanks, Den of Geek.

See how the real life boxers in the Rocky franchise have fared over the years. Fightland’s Thomas Golianopoulos covered that last year.

See how your favorite Rocky sidekicks fared in this comprehensive ranking. From Consequence of Sound.

Read up on some of those sidekicks, like Rocky’s turtles. Cuff and Link were also survivors and lived to appear in Rocky Balboa!

Enjoy this collection of the best Rocky parodies. From Civilized.

Argue that In Living Color’s Rocky parody was robbed.

Revisit the short-lived Rocky musical. Unlike almost everything else Rocky-related, it did not survive.

Dress up like Rocky. Carbon Costume has a helpful guide here.

Buy a Rocky action figure from the 40th anniversary collection. They’re no plushies, but they’re not bad looking.

Treat yourself to a Rocky adult onesie. Yes, this is a real thing. And it’s sold out at most  online stores.

Make your own Rocky crafts. Or buy someone else’s unique creations from Etsy’s surprisingly comprehensive selection.

Bake a Rocky-themed cake. Here are some examples to get you started.

Check out Vanity Fair’s collection of photos. They’ve put together a new slideshow to celebrate the big 4-0.

Try the Rocky Balboa with a consenting partner. Thanks, Urban Dictionary!