A 420 Collection of the Greatest Fight Scenes From Stoner Movies 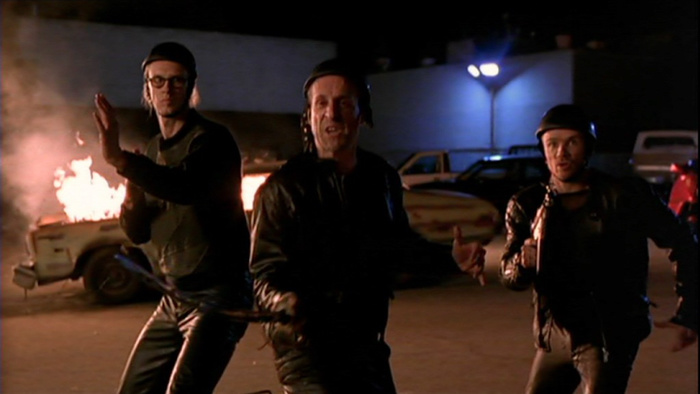 According to Dana White and Joe Rogan, the majority of UFC fighters smoke pot, so we have at least some proof that marijuana use is not antithetical to high quality MMA. However, not everyone who imbibes, or everyone who participates in stoner culture, is a particularly gifted or dedicated student of the martial arts.

To explore the less glorious – but no less entertaining – subsection of the middle of the stoner and fighter Venn diagram this 420, we took a look at some of the best and most iconic fight scenes in classic stoner films with this half-baked listicle.

Reefer Madness: Jack vs Bill (and Jack vs Ralph... and THE REEFER vs the youth of America)

Let us start with a cautionary tale: according to the ‘30s propaganda film turned stoner cult classic Reefer Madness, smoking the titular substance in question will lead to all sorts of bad decisions, like hallucination-induced grappling and striking that leads to manslaughter. This, in turn, will lead to beating deaths. And also playing the piano too fast, but that’s another story.

Dazed and Confused: Mike vs Clint, with a side of Mike vs Himself

In one of the many so-true-it-hurts slices of life from Richard Linklater’s beloved slice of life from white ‘70s youth culture, the neurotic intellectual Mike goes looking for a fight and finds the pompous greaser Clint at a party. Their first encounter is embarrassing for Mike. The second is, arguably, worse. But Esquire had an interesting take on the resolution of that plot when they named it one of The 10 Best Standoffs in Movie (and TV) History: “The question, however, is not whether he loses the fight; the question is whether losing the fight makes him a loser. One of the things that has always surprised me when I talk to people about Dazed and Confused is the prevailing conviction that it does – that Mike gets what’s coming to him when he takes on the “dominant male monkey motherfucker,” and ends up what he fears turning into: humiliated, “a little ineffectual nothing.” But that’s not it, at all. Mike gets exactly what he wants out of the fight. He’s triumphant because he triumphs over himself; he acts, and on the way home he even starts fashioning his loss into legend: ‘I mean, you wouldn’t say that I got my ass kicked...’”

In the cathartic climax of the 1995 buddy comedy Friday, the once aimless Craig Jones (Ice Cube, who co-wrote the film) threatens neighborhood bully Deebo with a gun after he witnesses him striking a woman. Craig’s father then tries to convince his son to put the gun down and fight hand-to-hand, which he eventually does. With the occasional assistance of blunt objects.

Half Baked: Thurgood and Brian vs Samson Simpson and his women

In a sting gone wrong, Thurgood (Dave Chappelle), Scarface (Guillermo Diaz) and Brian (Jim Breuer) are left to defend themselves against the drug lord and his army of vaguely Ninja Turtle-esque women. It’s nunchucks and swords against flailing strikes and wardrobe malfunctions. A piranha later comes into play.

Jay and Silent Bob Strike Back: Sissy vs Justice

Kevin Smith’s wacky navel-gazing 2001 comedy might be the most combat-heavy stoner flick ever made. The titular characters travel around the globe beating up everyone who posted something mean about Bluntman and Chronic, the movie based on the comics based on their likeness. There’s also a lightsaber battle. But the best fight of all is the one that goes down between reformed diamond robber Justice (Shannon Elizabeth) and her former girl gang sister Sissy (Buffy alumna and future Dollhouse star Eliza Dushku). It’s even amusing when you watch a version dubbed in French, as the above clip is.

Super Troopers: Frava vs a bus full of children

Broken Lizard’s 2001 masterwork only alludes to the school bus incident that got Rodney “Liter Of Cola” Farva suspended during the course of the actual film. But at the end, we get this incredible payoff.

The Big Lebowski: The Dude, Walter, and Donny vs The Nihilists

When the toe-cutting nihilist gang finally square off against the heroes of the cultiest classic offering from the cult classic filmmakers The Coen Brothers, we quickly discover that combat training is clearly another thing that they don’t believe in. Walter (John Goodman) has a Mike Tyson moment. Then Donny (Steve Buscemi) has a Dada 5000 moment that, sadly, does not end as well for the young man who was always out of his element as it did for Dhafir Harris.