A $50 Million Tournament Attempts to Change the Sport of Boxing 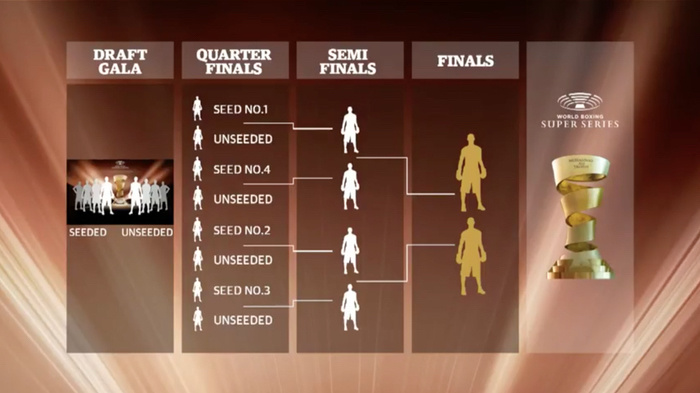 Late last week, the newly formed company Comosa AG announced plans for the “World Boxing Super Series”, a single-elimination tournament that will supposedly “change the world of boxing”. The Swiss company is working in collaboration with marketing groups, broadcasters, and reputable promoters from the world of boxing.

The tournament is planned for two yet-to-be determined weight classes that will feature eight fighters in each division. Participants will be competing for the Muhammad Ali Trophy, a concept developed by FIFA World Cup trophy designer Silvio Gazzaniga, and $50 million in prize money. While the amount will be spread throughout the tournament, it’s been estimated that the final bout could result in as much as $10 million for the tournament winner, a substantial amount compared to the average boxing purse.

Veteran promoters Richard Schaefer and Kalle Sauerland are also backing the venture—Sauerland being one of Europe’s biggest promotional names, and Schaefer being the former CEO of Golden Boy Promotions and founder of Ringstar Sports. Names such as these certainly boost the legitimacy of the tournament.

"I was skeptical at first but went into the meeting with an open mind," said Schaefer. "When I started to realize the quality of the material, the quality of the people, I immediately knew this is going to be something I not only wanted to be involved in, but I know it will succeed. These are people who not only have passion and deep pockets for the sport, these are people with the expertise to execute a tournament like this at the highest level."

So why exactly is this happening? Well, with the way boxing is currently organized, the sport is a mess. There are four recognized sanctioning bodies, meaning there can be up to four different champions in a given weight class, and four different ranking systems. Sometimes the champion of one sanctioning body is not even acknowledged in the rankings of another. Very seldom is there a unified champion (let alone an undisputed one), so this leaves the public unclear as to who’s who in the sport. This sort of confusion affects viewership, i.e. boxing’s financial lifeline, and a tournament such as this is meant to clear up that confusion.

This certainly isn’t a new idea. In 2001, Don King’s “Middleweight World Championship Series” took four fighters (three of whom were belt holders), and produced an undisputed champion named Bernard Hopkins. For the four following years, boxing had a clear and distinct middleweight champion.

In more recent time, Showtime put on the “Super Six World Boxing Classic”, which featured six of the sport’s best super-middleweights spread over four countries. Though the tourney did not produce such a definitive answer like its predecessor, it did give us Andre Ward as the winner, who has since dominated the super middleweight division, and is now doing considerably well in the light heavyweight division. If anything, tournaments like these can potentially force a division’s best to face one another.

But there are also some problems as well. With the frequency that fighters entering the ring nowadays, a tournament involving eight fighters could drag on well beyond the public’s patience, such as two-plus years of the “Super Six”. This could also mean contractually binding participants to fight only other tournament participants, and potentially preventing other intriguing bouts from happening. For instance, then IBF super middleweight champ Lucian Bute and WBO champ Robert Stieglitz were not included in the “Super Six” and were therefore not able to fight any of the tournament participants for over two years. And even if they were able to, say Bute or Stieglitz beat a tourney fighter with the tournament still ongoing, and said fighter went on to win the entire thing. Is that really the best fighter of the division or is the victor who was outside of the tournament the best? Hard to say.

Then there is the issue with the “larger-than-boxing” personalities in the sport.

"We want to focus on weight classes that might've been a bit ignored," Schaefer continued. "We want to bring those fighters to the forefront and expose them."

There could be some truth to that notion, but what is more likely the reason is because fighters in the less popular weight classes are willing to participate for smaller purses. That is one of the reasons Showtime was able to even pull off the “Super Six” because the super middleweight division was largely unknown at the time. Just don’t expect a tourney that includes Manny Pacquiao or Canelo Álvarez anytime soon because though $50 million may appear as a large bankroll, it’s still not big enough to meet the demands of the biggest names in boxing.

But overall, the tournament is a step in the right direction. Sauerland, the architect behind the tournament, has since learned from the “Super Six”, which he also managed. There are already talks with sanctioning bodies so mandatory title defenses don’t get in the way, and a list of reserve fighters are being planned for injuries and other setbacks that may take a participant out. Dates have even been penciled in to prevent the tournament from dragging on, with opening bouts scheduled for September and October, semifinals in January and February, and finals around May of next year. That is by no means an unreasonable timetable.

While there are still plenty of details to be worked out between all the parties involved, it is an ambitious venture that hopefully carries good intentions along with it. And given the way the current landscape of boxing is structured now, any attempts to help clarify the confusion is more than welcomed in my opinion.