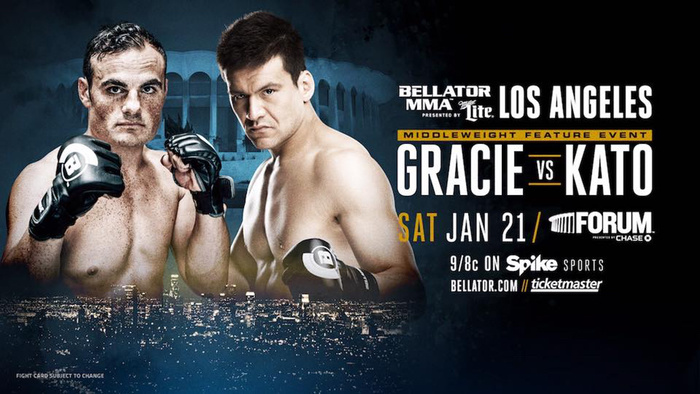 Ralek Gracie has had a bit of a PR nightmare this year stemming from AJ Agazarm’s takeover of the Metamoris Instagram page in January when he claimed that he still hadn’t been paid for his match with Karo Parisyan, which took place six months before his social media protest.

Most headlines that have appeared relating to Gracie over the last eleven months have been based on issues with his grappling promotion, Metamoris, but late last month the jiu jitsu black belt was in the news again due to his signing for MMA promotion, Bellator.

Even when he announced that he would compete in his first MMA bout in over six years, he didn’t manage to shake the shadow of the Metamoris controversy. In two of his first interview since his signing with Bellator, with UNCUT and ESPN, the conversation shifted on to the topic of when the promotion would pay its outstanding debts.

Gracie’s return to MMA picked up a little heat yesterday when Bellator announced that the jiu jitsu expert would face off against Hisaki Kato in a middleweight bout in Los Angeles on January 21.

You can say what you want about Gracie’s acumen in the business world, but his booking alongside Kato proves that he is very serious about his return to MMA, or at least he’ll have to be if he wants to keep his perfect record intact.

Kato can Bang with the Best of ’em

You should look no further than Kato’s two knockout wins over Joe Schilling if you doubt the test that is in front of Gracie.Twice, against the run of the fight, Kato has put Schilling to the floor. The first came in Schilling's last MMA bout at Bellator 139 when a superman punch finished his night in the second round. Kato had plenty of detractors on the back of the win because of Schilling being better known for his ability as a kickboxer. So, five months ago, he took on Schilling in a kickboxing bout and despite taking the brunt of the damage in the fight, he scored a knockout over the American with a spinning back fist at the end of round two.

Having made his professional MMA debut less than four years before he is set to face Gracie, Kato made his name on the back of his finishing ability. After four fights he had already claimed the middleweight title from Japanese promotion, Heat, on the back of four stoppage victories. Even when Brazilian Henrique Shigemoto took the belt off Kato in his first defense, it wasn’t enough to dissuade Bellator from capturing his signature.

Kato is also known to have a strong pair of whiskers, which is evident from the punishment he took from Schilling before stopping him in their kickboxing bout. That being said, he has been stopped by strikes twice, his only two losses.

Shigemoto’s toughness saw him through Kato’s onslaught when he took his Heat middleweight championships from him. Kato dropped his challenger twice and appeared to have punched himself out before the Brazilian caught him on the button.

The other man who owns a win over the Japanese 34-year-old is Melvin Manhoef. Manhoef has proven to be the kryptonite to most amazing chins—just ask Mark Hunt—so we can’t really hold that one against Kato, regardless of how perfect the left-hand dispatch was.

One thing that will bode well for Gracie is the lack of footage we have seen of Kato on the ground. Against Shigemoto, he scrambled well to get back to his feet before the bout was finished, but we can all agree that it will be completely different story should he find himself on the deck with Gracie.

How does Gracie Stack Up?

There is no doubt that Gracie will have his Japanese counterpart in significant danger if he manages to control him on the ground. In his three professional outings thus far, only the legendary Kazushi Sakuraba managed to fight him to a decision after going down to the canvas with him.

Even though he seemed to knock the then 41-year-old down in the first exchange of their May 2010 clash at Dream 14, there are still some questions surrounding his proficiency in the striking realms.

In his two earlier MMA bouts with Katsuyori Shibata and Alavutdin Gadzhiyev, Gracie struggled to close the distance to get the fight to the ground in the early exchanges. With Shibata being a former professional wrestler and Gadzhiyev a journeyman, Gracie will be in far more considerable danger against Kato.

A recent clip of Gracie throwing a spinning back fist during boxing sparring with Nick Diaz doesn’t inspire much confidence ahead of his return. Although it’s very hard to judge his entire striking game on the one-minute clip, Gracie was stopped during the training session with a body shot just after his spinning attempt as shown in the footage, which doesn’t help his cause either.

Due to the age of Sakuraba during their clash, and the fact that he never won another MMA bout in five more attempts after fighting Gracie, you can’t help but think Kato is Gracie’s most legitimate MMA test to date. While he is no spring chicken at 34-years-old, his professional career has only spanned three years thus far, making him a very dangerous prospect for the jiu jitsu ace.

McGeary vs. Davis: The Return of the Guard