A Brief History of Brawling in NASCAR 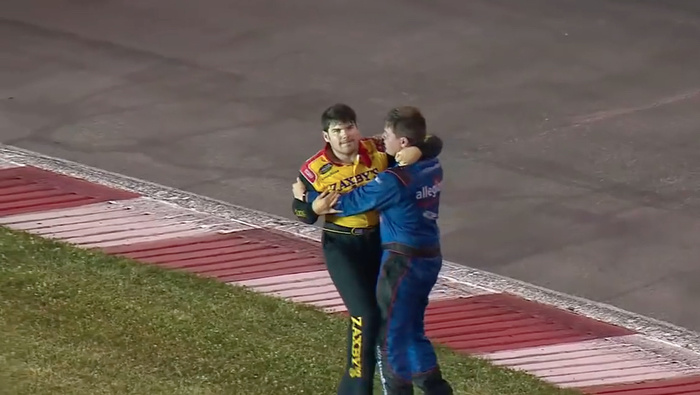 One of the odd quirks of being a fight fan is that you often see versions of your sport(s) erupt in other sports, both as an arguable part of the game (hockey) and the result of athletes losing their cool and giving into the base instincts (almost everything that’s not hockey).

These displays of almost entirely undisciplined, uneducated fury and wounded egos aren’t exactly technical marvels. They’re about as good as you’d expect from a pair—or group—of grown men who are paid fantastical amounts of money and reverence to engage in ritualized low (or no) contact play for a living. But they can provide a certain giddy thrill if you’re into sub-Springer, lowest common denominator brawls. And they can also provide a decent sliver of schadenfreude if you’re not.

A particularly wonder/terrible example of this kind of exchange took place over the weekend when NASCAR Truck Series drivers John Wes Townley and Spencer Gallagher came to impotent blows, one stripe white belt takedowns, and a DDT attempt after a crash at the Drivin’ For Linemen 200 at Gateway Motorsports Park yesterday.

While this was a particularly low moment in NASCAR history as far as fisticuffs go—one that, as Uproxx writer Bill Difilippo put it, was “like watching two first graders fight over who gets the last carton of chocolate milk during lunch”—it is far from an isolated event for the stock car racing association.

“Being aggressive in one way or another has always been part of the sport’s fabric,” Juliet Macur wrote for The New York Times in the aftermath of the ugly confrontation that led to racer Kevin Ward Jr.’s death in 2014. “Even early on, drivers who caused crashes were paid back with bare knuckles. I have to think that if iPhones existed when Nascar was born in 1948, on the hard-packed sands of Daytona Beach, YouTube would likely be teeming with videos of men beating the heck out of one another as the waves lapped at their feet.”

In (dis)honor of the latest chapter in the ongoing story of men who, for the most part, keep giant, speeding death machines under control for a living but can never quite master their own tempers in the same way, let’s take a brief look back at the history of the NASCAR fight.

Much like the antics of The Hanson Brothers helped propel the success of a hockey team in Slapshot, a brawl between two high profile drivers and a brother during the Daytona 500 that year sparked much of the success that NASCAR continues to enjoy to this day.

“In the 1979 Daytona 500, the first 500-mile race broadcast in its entirety on national television, Donnie Allison and Cale Yarborough crashed on the final lap of the race, and they ended up in the infield grass with Donnie’s brother, Bobby, exchanging punches and kicks and attempting chokeholds as the cameras rolled,” Juliet Macur wrote. “The brawl made bigger news than the race, and the publicity was priceless.

“The rest of it’s history,” Donnie Allison mused in a retrospective video on the big fight, considered one of the greatest moments in NASCAR history. “It’s the lightweight championship of the world after that.”

A decade later, the boiling point of a similarly contentious feud once again captured the imaginations and bloodlust of the NASCAR world when an arguably dastardly move off of Turn 4 at the Winston All-Star set off a full-blown melee between Darrell Waltrip, Rusty Wallace and their respective teams.

It wasn’t much of a brawl, even by NASCAR standards. As is often the case with racing-related group fights, it was executed with all of the power and none of the finesse of a Sharks vs Jets rumble, but the fight is remembered fondly for the drama that surrounded it as former hero Rusty Wallace took a turn for the dark side rarely seen outside of pro wrestling and classic Greek tragedy.

Incensed at a turn of events during a race at the Michigan Speedway on Father’s Day of that year, Michael Waltrip calmly climbed out of his vehicle, walked over to Lake Speed’s car, leaned in and not so calmly unleashed “words and maybe more,” in the parlance of one commentator, right onto Speed’s face.

Unimpressed with Jeff Purvis’s unsportsmanlike behavior during the Lycos.com 300, in which he repeatedly rammed into his vehicle, Mark Green and his team unleashed some unbecoming conduct of their own. Purvis and company responded in similar fashion, which prompted one announcer to excitedly declare “A Jerry Springer Show’s going to break out! What a melee!”

Purvis earned a four race suspension for his efforts.

Unimpressed with Greg Biffle’s behavior at the Channellock 250, Kevin Harvick launched himself over the back of Biffle’s car during a post-race interview, attempting some sort of flying choke hold. He gets points for innovation and indestructible self-confidence in the face of questionable odds, but doesn’t particularly succeed in the execution.

Flying (or flailing) ninja Kevin Harvick attempted to get into yet another fight in the following year in an altercation with Ricky Rudd’s team at the Chevy Rock & Roll, but their respective people managed to keep them apart, leaving the two drivers to do little more than play an angry game of hot potato as they threw Harvick’s HANS device at each other.

Jimmy Spencer did manage to punch Kurt Busch in the nose that year, though.

Notorious hothead Tony Stewart, who has been involved in a spectrum of altercations ranging from the laughable to the genuinely deadly, Kasey Kahne, and their pit crews found themselves in the middle of a Royal Rumble-style brawl after an incident during the Chicago 400. In the midst of all of that shoving, both drivers managed to show a hint of grappling and takedown knowledge, if not any actual skill in those areas.

The AAA 500 quickly descended into a redneck reenactment of Benedict Cumberbatch’s big fight scene from Starter For 10 when Jeffs Gordon and Burton slapped each other’s arms, and attempted to get some sort of grips on the other’s firesuits before quickly being pulled apart on the track.

Jeff Gordon sparked a fairly extensive garage fight against Clint Bowyer’s team at the AdvoCare 500, but it had already been broken up by the time that Bowyer himself arrived at the scene.

Despite one announcer’s almost desperate assertion that “I did see some punches thrown today. You can’t say they’re just pushing each other!” there’s really not that much to see in this spat between Tony Stewart and Joey Logano at the Auto Club 400.

It was a big year, if not a proud year, for the NASCAR fight. Brad Keselowski got into a WWE-worthy backstage brawl against Matt Kenseth at the Bank of America 500.

Keselowski also set off a massive rumble against Jeff Gordon and his people that same fall.

And Marcos Ambrose hauled off and landed a punch in general area of Casey Mears’s face at the NASCAR Spring Cup in Richmond, a moment that prompted the commentator to explain “This is not Ultimate Fighting on FOX. This is NASCAR on Fox.” Despite the accuracy of the strike—a rarity in the stock car racing universe—we’re pretty sure that no one was confused.

Everyone’s least favorite dumpster fire of a year has not been kind to NASCAR’s fight culture, either. Tony Stewart kicked off the year by climbing into the stands at the Chili Bowl Nationals to confront a heckler.

And now we have John Wes Townley vs Spencer Gallagher. Which some genius has already edited to include classic Jim Ross pro wrestling commentary, buhgawd.

A Brief History of Dance Fighting