A Brief History of Burger King and Boxing 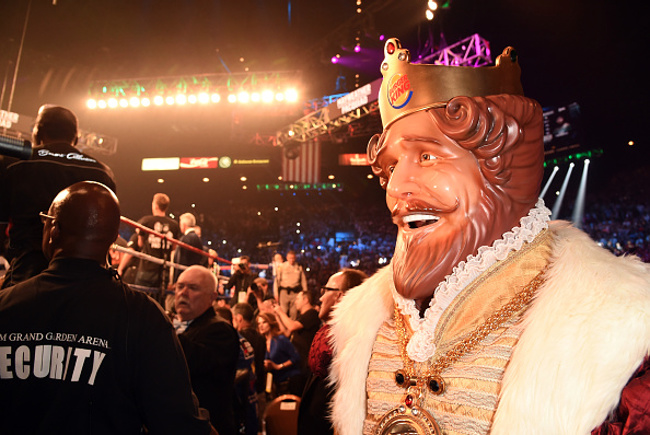 When Floyd “Money” Mayweather Jr. entered the MGM Grand with his buddy Justin Bieber and The Burger King last in tow last night, it truly baffled the global audience who had settled down to the watch the much-ballyhooed “Fight of the Century.” Longtime boxing fans and curious dilettantes alike had many questions. Questions like, “Did I just see that?” and “Are the end times nigh?”

New to boxing, does the Burger King king usually show up? #maypac pic.twitter.com/Ag1ujwDlYj

But perhaps the weirdest thing about The King’s appearance last night was that it wasn’t quite as weird as it seemed at first glance, and not just because it kind of makes sense that someone as notoriously creepy as the unsettlingly-faced King would totally be the type to consort with convicted batterers and deadbeat monkey dads.

Here are some highlights from this strange and often lucrative relationship:

In his 2009 book Knockout Entrepreneur: My Ten-Count Strategy for Winning at Business, boxing and grilling great George Foreman writes about some of the shots that boxing announcers took at his unabashed cheeseburger love and weight when he was on the comeback trail in his 40s. One of those digs? “George Foreman has his training camp right next to Burger King.”

According to a brief passage in the 900 page tome Boxing: Medical Aspects by Friedrich Unterharnscheidt and Julia Taylor Unterharnscheidt, Don King reached out to a number of major corporations, including Burger King, when he was looking for a sponsor for a potential world tour with Mike Tyson in 1989.

A decade and a half later, BK did end up sponsoring Iron Mike, in a sense. They ran a contest and a series of ads in connection with his Adult Swim show, Mike Tyson Mysteries.

3. Burger King has been sponsoring boxing for years.

In 2008, the burger chain gave $500,000 to Jamaica’s national boxing program. They’re currently sponsoring a series of events called “The Burger King Road to the Title” in New Zealand.

There’s a fantastic longform piece on Medium’s sports vertical, The Cauldron, about an unexpected friendship that developed between the GOAT and a far less successful boxer from Newcastle. It opens with a story about Ali, his manservant Abdel Kader, and his new buddy Russ Routledge speeding around L.A. in 1984 and stopping for lunch at... Burger King!

5. BK marketed the hands-free Whopper as a boxing aid.

In 2013, BK announced that they had produced a hands-free holder for Whoppers. In the commercial, they show a boxer employing the device while he boxes. Sadly/mercifully the whole thing was a hoax.

The King was an unlockable character in this heavily-branded boxing video game released by EA Sports in 2006. Once unlocked you could hire the ghoulish mascot (in truly terrifying uncanny valley form) to be your cornerman. This is widely hailed as one of the worst product placements in the history of gaming.

Legendary heavyweight and cruiserweight champion Evander “The Real Deal” Holyfield did a series of ads for Burger King in the early ‘90s promoting their “Real Deal” (a breakfast combo for $1.59!) and Breakfast Buddies.

8. Whatever the hell this is.

In an effort to promote their line of chicken sandwiches, the burger chain staged some sort of boxing/MMA/pro-wrestling hybrid fight between two grown men in chicken costumes in 2004. It aired on DirecTV on a Friday night and it really must be seen to be believed.

After James “Lights Out” Toney defeated Mike McCallum in Reno, Nevada on August 29, 1992, the announcers asked him what was next. A hokier athlete might have responded with “I’m going to Disney World!” But not Toney. Toney was going to Burger King.

“My birthday was Monday, and now I feel like I could go home and enjoy it with some Burger King,” Toney declared in one of the most famous post-fight interviews of all time. “Here I come, baby! Burger King! Burger King! And shout out to Bob Arum ‘cause he’s my man! Don King, kiss my ass!”

Tale of the Mixtape: Mayweather vs. Pacquiao

10 Things You Can Buy for the Price of a Mayweather vs. Pacquiao Ticket