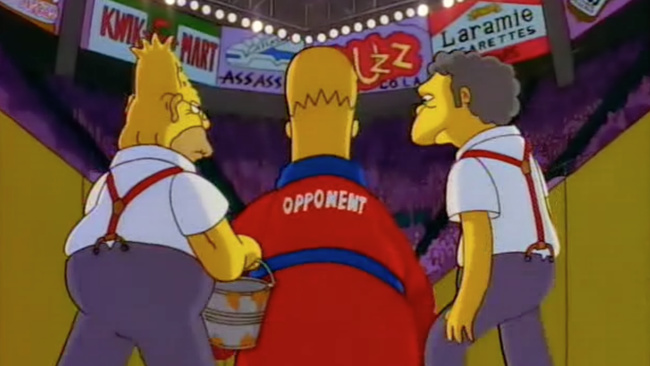 Martial arts and combat sports are, of course, serious business. People dedicate their entire lives to mastering them. They put their egos, their bodies, their livelihood and, in extreme cases, their lives on the line to practice and compete in them. They’re a source of discipline and drive. They’ve changed lives. They’ve consumed lives.

Sometimes, we get so caught up in them that we start to forget that they’re kind of funny, too. Not just “Nick Diaz meme” funny ("nick diaz meme") or “Mike Tyson said something again” funny, either. Because of their physical nature – and because of their sometimes overly serious nature—fight training and competition is ripe for comedy. Practice and bouts come with all sorts of potential for prat falls and other physical comedy. Overly confident dilettantes who think they can win a fight provide opportunities for amusing schadenfreude. And the general absurdity of fight culture—not to mention fight clubs—can always stand a tiny bit of teasing.

Sitcoms have been miming all of this for material since Ralph accidentally found himself in a fight on The Honeymooners and The Dick Van Dyke explored a dance/fight hybrid called “The Twizzle.” When they do it well, we get The Mighty Boosh’s whimsical take on boxing or Bob’s Burgers fairly recent skewering of capoeira. When they fail, we get whatever Family Matters was trying to do with Urkel’s various pursuits.

With that in mind, we’ve compiled a brief overview of some of sitcom’s biggest knockouts and most embarrassing losses in the arena of martial arts-related plots. It is, by no means, a completely comprehensive list, for various reasons (there are no good Happy Days clips), The Office US deserves its own story, etc.) but it should be enough to get you started.

Ralph gets into an altercation at a pool hall that results in him being challenged to a boxing match at the local gym in “The Bensonhurst Bomber.” He desperately tries to get out of it and fifties-style television hilarity ensues.

You could say that this beloved sitcom accidentally stumbled upon capoeira when pro wrestling legend Classie Freddie Blassie showed up in the middle of a dance party at a bowling alley and set off a dance fight frenzy in “The Twizzle.”

Gomer’s Sergeant, Vince Carter challenges Chief Petty Officer Simpson to a boxing match. The only problem is that Simpson was the Fleet Champ and has 37 KOs on his record, and Carter has no idea.

TV has taught me that unwanted boxing matches and/or boxing careers are everywhere. Take this episode of The Monkees, for example. Davy’s just adorably walking down the street when he stumbles into a fight and gets discovered by a boxing promoter who thinks he has the greatest right hand he’s ever seen. The ensuing fight involves a whole lot of monkeeing around.

Jeannie gives her master, Tony, the power of the punch. Because all of Jeannie’s ends in some sort of bizarre misery for Tony, said power lands him in a boxing match. Boxer Jerry Quarry appears as himself in the episode.

In this episode of one of television’s most famously WTF shows, Hogan and his wacky band of POWs (in a German camp, in World War II) use a boxing match to try to distract the Nazis from some Ally-friendly hijinks.

In “Requiem for a Lightweight,” the third ever episode of one of the most critically acclaimed and beloved TV shows of all time, Trapper enters a boxing tournament in an effort to get an attractive nurse transferred back to his unit. Trapper sucks, so he and Hawkeye develop a plan to cheat that involves rubbing ether on his gloves. The plan goes comically wrong.

In “Joltin’ George,” the Jefferson paterfamilias gets into an ego-busting altercation at the gym when he tries to help Marcus learn some self-defense moves. Sherman Hemsley delivers some fine physical comedy as George shadowboxes and dreams of boxing glory.

This classic British comedy flirted with mixed martial arts when a boxing challenge turned into a last-minute wrestling match in “The Hero.” There’s a rear naked choke involved. Its form leaves much to be desired.

Martin ends up in a boxing match after someone else flirts with Gina. It doesn’t go well.

In what might be the most bizarre use of martial arts to ever appear on television, Steve Urkel tales Bruce Lee Juice and becomes Bruce Lee Urkel, a karate(?) master alter ego whose powers included defending kids at the park and, against all reason, appearing in further episodes.

When you’ve made over a quarter of a century’s worth of episodes, you’re bound to revisit certain themes once or twice and The Simpsons has gotten some good mileage out of fight-related content over the years. They’ve tackled MMA with Chuck Liddell and with Nelson, Bart, and Milhouse. They’ve also introduced “No groin, no Krav Maga” to the lexicon thanks to this karate vs. Krav Maga fight. But the animated staple’s best fight adventure was “The Homer They Fall,” in which Homer discovers that he’s impervious to knockouts and rope-a-dopes his way to a championship match again a Mike Tyson-esque figure.

Will doesn’t take a female boxing coach named Helena seriously, makes some really bad puns, and subsequently gets knocked the fuck out. The episode is named “Boxing Helena,” which was probably a fairly recognizable joke at the time, but is still a weird reference for a family sitcom to make.

The title of this episode from the inexplicably popular and enduring Wings is called “Raging Bullz*&A!” Which is, in all likelihood, the naughtiest joke the show ever risked. Anyway, Joe and Brian face each other in a boxing match because they have a stupid relationship and can’t deal with things like non-garbage humans.

I was wrong when I praised Newsradio for being the first big sitcom to tackle mixed martial arts. They may have done it better, but the Friends gang beat them by a year with “The One With The Ultimate Fighting Champion” in which Monica’s boyfriend faces Tank Abbott (as himself) in the Octagon.

On an unrelated note: holy crap does Bruce Buffer look young in this clip.

Andy Dick made Joe Rogan tap. Later, Joe taught his coworkers some Joe Jitsu, but we’ve already discussed that at some length.

In the late nineties, a disturbingly large portion of television watching society went through a collective fever dream in which we thought this David E Kelly dramedy about a skimpy-skirted lawyer and her wacky colleagues was good. In this episode, Ally and her childhood boyfriend’s wife take up kickboxing and then they fight each other.

Maybe Steven Seagal taught her that front kick-like thing she does.

George signs Max up for boxing lessons against Angie’s wishes. They get caught thanks to a sparring-related black eye.

Boxing and underground fighting both get some attention in “Hundred Dollar Baby.” Frank trains Dee for the former. Charlie prepares for the latter with some help from Dennis and Mac.

Carly ends up facing CFC champ Shelby Marx in an MMA fight as the result of a joke challenge. The result is every bit as Nickelodeon-esque as you’d expect, but it’s also far more accurate than you’d think. The iCarly wiki adorably breaks down the ways in which iCarly got MMA right, and also points to some other instances of arm bars, judo throws, and Jackson Colt guest appearances on the show.

The critically acclaimed cult hit 30 Rock never did a proper fight-themed episode, but they did throw in the occasional combat joke over their seven seasons. Liz Lemon and Pete Hornberger both found themselves in less than conventional fight clubs over the years. And Jack Donaghy’s nemesis Devon Banks liked to practice karate in his incredibly short robes.

(Incidentally, I can tell you from experience that impersonating Banks’s karate practice is a great way to rile up Lyoto Machida haters.)

In this silly but eerily accurate look at capoeira culture, called “Sexy Dance Fighting,” Tina takes up the martial art. Bob is forced to redeem himself after he gets into an altercation with his daughter’s capoeira instructor and poops his pants.