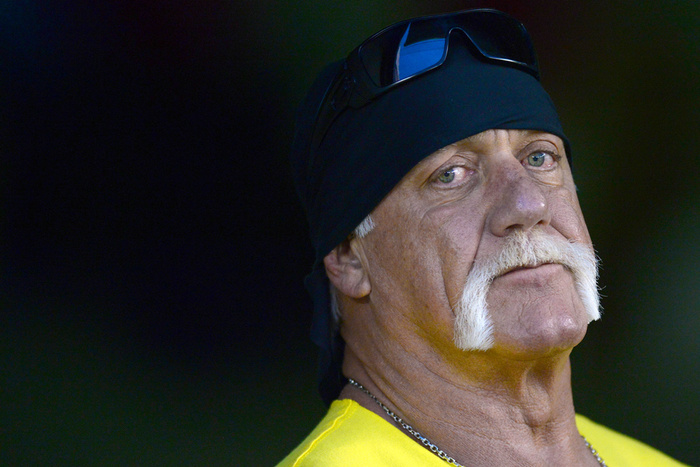 Before our multinational art rock collectives and ennui-ridden pop stars took over the charts and our shiny-haired Prime Minister captured hearts and loins across the world, Canada’s self-esteem issues were painfully obvious and comical. Our red carpet reporters would ask whatever random celebrities they could grab “what do you think of Canada?” instead of “who are you wearing?” We’d get disproportionately excited if someone else said something nice about us in passing—or acknowledged us at all. But if someone sad something even remotely negative, we’d be overcome with flailing rage and compensatory posturing.

I bring this up now because, in some ways, being a person who cares about MMA today feels an awful lot like being a Canadian in the ‘90s. Every random celebrity who shows up at a UFC event is flung in front of the cameras for proof of the how beloved the world’s fastest growing sport really is. Each mention in pop culture is received and analyzed with the same intense passion with which Angela Chase used to treat her every interaction with Jordan Catalano. And any misunderstanding, misrepresentation, or criticism of mixed martial arts from the outside world is met with an exponential and opposite reaction. For example, if a much-lauded actress takes an awkward shot at MMA and claims that they’re not The Arts in a awards show speech, we lose our heads and turn into raging philistines who question the genius of Death Becomes Her (which is, in reality, an underrated classic better than at least 70% of the fights I’ve ever seen).

As we pick up the shattered pieces of our souls in the wake of Meryl Streep’s devastating blow to our glass-jawed egos and, to paraphrase La Streep’s quotation of her departed friend Carrie Fisher, take our broken hearts and make them into mixed martial arts, let’s take a moment to look back at some of the other ways in which prominent politicians, boxers, and scribes have used their platforms to denigrate our sport and hurt our MMA-loving feelings.

In 1996, John McCain uttered the phrase that launched a thousand dismissals from boxing fans, upstanding citizens, and your relatives who just don’t understand you.  After being horrified by a viewing of an early UFC tape, the Arizona Senator, declared the activity “barbaric,” “not a sport” and, most infamously, “human cockfighting” and sent letters to 50 governors in an effort to ban the UFC. Although McCain’s opinion of MMA has evolved along with the sport—in 2007, the lifelong boxing fan told NPR that "They have cleaned up the sport to the point, at least in my view, where it is not human cockfighting any more. I think they've made significant progress. They haven't made me a fan, but they have made progress."—his way with words lingers on the lips of many an uneducated MMA-detractor. In 2012, Fox Sports columnist Jason Whitlock randomly shot down MMA as “caged human cockfighting” because he had some unresolved football feelings.

MMA is not a real sport.

McCain isn’t the only person to drag out this particular talking point. Multi-time and multi-weight boxing champion Adrien Broner took a similar shot at mixed martial arts a few years ago. In this case, though, his concern wasn’t the ostensible viciousness of the activity, it was its... lack of divine intervention in the training process? "I'm really not too big on MMA. I really don't look at it as a real sport because anybody can come into MMA and learn that,” he said in 2013. “You can learn that. You can't just come into boxing and be a world champion. You got to be born with it. Right now, you can go into MMA, learn all the submission moves and be a world champion."

“MMA is barbaric” is the “rap music? more like CRAP music” of the sports world: a tired reflexive strike tossed by old, unaware and overwhelmed people who are scared of a changing society and think they’re making a devastating point.

1NEWS presenter Peter Williams went for “barbaric, animalistic and crude” in his invective against MMA last March. He followed that up with other sick burns like “I sometimes think it should be grouped with the nature and wildlife channels.”

Sunday Independent columnist Paul Kimmage admitted to feeling ambivalent about the sport in an interview on RTÉ Radio 1′s Today With Sean O’Rourke in 2015. "I’m intrigued by it. I’ve been asking about it now for a long time as whether we should engage with this because there is a lot of pantomime to it. There's a lot of show,” he mused. He then went on to drop the b word, though, and say that he was also repulsed with MMA after watching it.

And, in 2005, none other than Hulk Hogan declared that MMA was “pretty barbaric” and will always have a narrow audience on an episode of CNBC’s The Big Idea with Donny Deutsch. And we all know that the Hulkster would never do anything niche, barbaric, or untoward.

At least according to this guy.