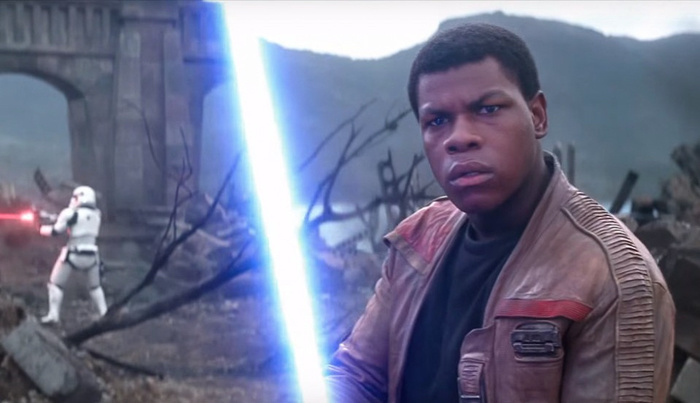 The long-anticipated (and longer desired) Star Wars: The Force Awakens finally opened this past weekend, predictably obliterating its box office competition like a newly crowned UFC champ and sending the pop culture universe into further Jedi-related fervor. With every outlet and reporter clamoring for a new or fun angle on this massive hype train, one trend has emerged that might be of particular interest to fight fans: a (re)awakened interest in lightsaber training.

Organized lightsaber fighting and instruction has been going on for at least a decade now, with the first prominent chapter of Saber Wars, a loosely-knit international community of combatants and choreographers, forming in late 2005. But it has been gaining an increasing amount of momentum—and seriousness—in the past few years. With Star Wars-mania running even wilder than it ever has before, interest in the burgeoning hobby/discipline/sport can only increase.

Although the real world applications of an imaginary weapon are arguable at best—and, as Kendo instructor Christopher Salet argued in a 2014 Popular Mechanics article, probably extremely boring if you were actual applying proper strategy and trying to injure your opponent—a number stage combat experts, fencers, and martial artists of varying backgrounds have dedicated themselves to the kyber crystal-powered laser sword with a fascinating spectrum of results. Some choose to focus on style and teach their Padawans to choreograph and execute pre-planned routines for audiences. Others try to blend the fantastical and the practical to develop a performance-based art with martial arts roots. The truly brave are actually trying to develop lightsaber combat as a genuine sport.

Here’s a look at some of the most popular, prolific, and intriguing schools among them.

Founded in 2011, the Golden Gate Knights is a not-for-profit group that provides instruction in “lightsaber choreography, spins, flourishes, and a whole lot more” in the San Francisco Bay area. The GGK style of lightsaber battle is somewhat stylized, but their instructors do boast a fair amount of more traditional martial arts experience. Head instructor Alain Bloch has a background in Iaido and Ying-Jow Pai Kung Fu. And his sensei Matthew Carauddo (a.k.a. Novastar)—who doesn’t currently teach at GGK but offers private lessons in the Los Altos area—is also a fencing instructor with a background in Kung Fu, Jujitsu, and stage choreography. Golden Gate Knights classes include both stage combat training and meditation. Yoda would be proud.

Although it’s relatively new to the game, the Indy Lightsaber Academy, founded in January 2015, has become the media’s favorite school to turn to for lightsaber-related advice with recent appearances on local news broadcast and a profile in GQ. With an emphasis on real world techniques, ILA’s instruction is as about as pragmatic as you’ll see from the world of sci-fi-inspired combat. “We are here to provide practical instruction to an impractical weapon,” they say in their mission statement. “While the lightsaber does not exist as it does in the movies, the concepts are grounded in real-life sword play and martial arts concepts. Beyond the practical, we also promote an element of fantasy with our choreographed routines and duels.” Or, as co-found Michael Tucker put it in GQ: “We’ll teach you how to look good, but also how to use martial arts.”

Based in Italy (with the promise of affiliate academies opening across the world soon), Ludosport might be the most serious, most combat-oriented, and most organized of all of the lightsaber-oriented schools. “Lightsaber Combat is a brand new discipline of combat, although in a sporting way,” their official site promises. “It can be called ‘martial art’ just in its etymological meaning of ‘art of Mars 9the roman god of war)’.” The sport’s founding members have backgrounds in aikido, judo, jujitsu, kempo karate, savate, and medieval fencing, but they stress that LudoSport is almost solely derived from Star Wars and its related texts.

Approaching and developing saber combat as a genuine sport with 7 styles, and 10 rules, Ludosport offers International Ratings and official competitions. They even have their own lightsabers (“It is neither a toy, nor a collectible.”), uniforms, and protective gear.

The OGs (or should that be OJs?) of the lightsaber combat community, the New York Jedi, “a community of people and teachers who share practical Martial Arts-based and Stage Combat oriented lightsaber techniques in order to create illuminated stage combat for fun,” were established in 2005. They are also the founding chapter of Saber Wars, a worldwide network of lightsaber practitioners who have picked up the illuminated sword for either stage combat or martial arts sparring.

While there is some martial arts influence involved in New York Jedi’s own training, it’s clear that their primary focus is choreography.

Singapore’s premiere lightsaber training center formed in 2014 with the promise to merge function and fantasy, and their emphasis is clearly on the former.

“When it comes to saber dueling, we don't believe in fictional styles or make-believe combat,” the vision statement on their site says. “We also don't believe in learning skills that cannot be used in real-life or self defense situations. Why spend time learning something that does not help you in any way.”

Based on a collection of unspecified “Asian martial arts,” The Saber Authority’s lessons are built on a foundation of basic strikes and footwork, with more advanced classes adding combat strategy, combination strikes, close quarter combat, and double saber combat to the mix. They’re so serious that they even have a ranking system.

Ann Arbor, Michigan-based Terra Prime offers both in-person classes at a local athletic club and online, open source material on its site and Facebook group for aspiring saber-fighters all over the world. With an emphasis on “technical and educational excellence,” TPLA was formed in 2012 with a mission “to use LED lightsabers as a weapon analog for historical martial arts in a modern and relevant context, to spread these arts and knowledge to future generations, and preserve the techniques developed by past generations.”

Their seminars appear to be a mix of combat technique training, cosplay, and impressively hardcore geekery.