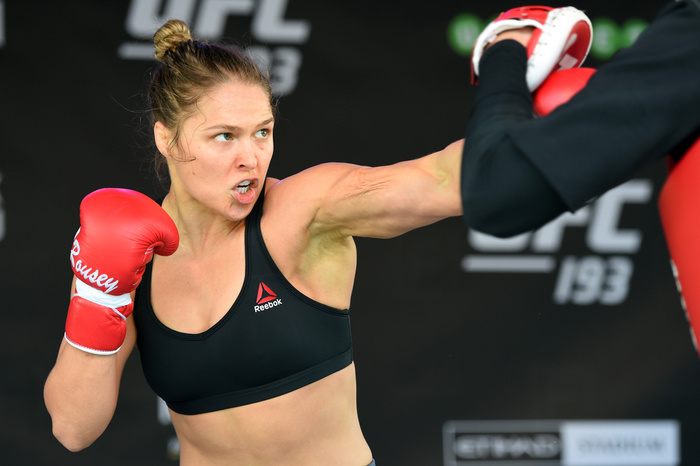 It would be hard to tell you much that you have not already figured out about this weekend's match up between Cristiane 'Cyborg' Justino and the 6-1 UFC newcomer, Lina Lansberg. It is being fought at a catchweight of 140lbs, going no further towards proving that Cyborg can make the arduous cut to 135lbs, and Lansberg is far from a tested commodity in mixed martial arts. Add the bizarre match up between long time bantamweight belt holder, Renan Barao and the unheralded Phillipe Nover in the co-main event and this UFC event starts to look like a tune up card in front of a home crowd.

The women's featherweight division has always been thin on talent. For a chuckle you should visit the excellent rankings site, FightMatrix, where the magic of computers is used to score a fighter's victories and losses and remove the human element of rankings. Women's featherweight is a class in which many of the top ten have under ten fights to their name, where the 4-4 Peggy Morgan is ranked at #9, and where the #15 ranked fighter in the world has one professional fight under her belt. For extra hilarity notice that the jiu jitsu standout, Gabi Garcia, is ranked at #14 in the world at featherweight and likely hasn't weighed 145lbs since her school days. A quick check at the top of the page will reveal that Fight Matrix lists women's featherweight as 140lbs and over. That is how desperately shallow the talent pool is north of the women's bantamweight division.

Because of the lack of depth at women's featherweight, and even at women's bantamweight, the fight which many fans wanted to see for years was the UFC's women's bantamweight champion, Ronda Rousey, against the consensus number one female featherweight on the planet, Cristiane 'Cyborg' Justino. We won't get into the rumors and squabbling over who ducked whom, but the sticking point always seemed to be weight. Cyborg insists she can't make 135, Rousey didn't want to go up. Fair enough. But let's imagine for a moment that they did fight. Two years ago everyone seemed certain Rousey would win easily, now the opinion seems to have reversed.

The clinch is everything in a Rousey bout. She has the big right hand, and she has the clinch. Once she gets a hold of her opponent it is usually a case of the harai-goshi hip throw or an armdrag or inside trip following on from that attempt.

One of the neater points of Rousey's game is that she often throws straight into dominant positions, rather than hitting a single or double leg takedown into some manner of guard. Indeed, Rousey will often land in a side control between her opponent's near elbow and body, the kesa-gatame or 'scarf hold'—a considerably better position for control and attack than if her opponent's elbow were closed. Bypassing the guard and moving straight from the clinch to side control, Rousey removes all the opportunities for the opponent to recall their training and return to their tight-elbowed shell.

It helps if you blast them in the face first too.

The reason that Rousey could simply walk into the clinch against everyone she fought, spare Holly Holm, is that they all attempted to throw their power hand as soon as she walked towards them. She'd occasionally slip it, more often take it, or—most often—they'd miss and suddenly they'd be in the clinch. While the jab maintains distance and keeps the body bladed, throwing the rear hand squares the body up and offers the clinch quite freely.

This is where the Cyborg match-up becomes so interesting. Cyborg concedes the clinch all the time. Her bread and butter is stepping in and unloading with wide right hands to the body and head. She's been doing this in a more measured fashion in recent years, but the Wanderlei Silva style flurries of hooks are still present in most of her performances. Savvy veterans like Marloes Coenen have been able to threaten her in the clinch, but even her most mediocre opposition has had success grabbing a hold of Cyborg to slow the onslaught on the feet.

This was among the worse shots you will see in a title fight.

Within the clinch it is worth considering that one of Cyborg's favorite techniques is that uranage/suplex as her opponent clutches the headlock. Headlock throw attempts have always been far more popular in women's MMA than in the men's game, but they can backfire in a number of ways even on a judoka as technically gifted as Rousey. And if you're not a Rousey level judoka? No balance breaking, no combinations? You're probably getting suplexed. That's Russian Judo.

Readers will recall that Holly Holm had success utilizing this classic counter against Rousey on one of the occasions they clinched. On the other occasions Holm focused on getting her near arm between her and Rousey, and then making herself into a prawn along the fence, which Firas Zahabi made a great video about a couple of days after the fight.

Against the overmatched competition she has been facing in Invicta, Cyborg has often been able to simply shove opponents off and keep swinging.

That being said, the stiff arm is grossly underrated as a counter-grappling weapon largely because of its seeming simplicity. A straight arm in the face of an opponent prevents them from securing a chest-to-chest clinch unless you either bend your elbow, your hand is deflected, or your arm somehow crumbles to dust under the force of their advance. The stiff arm was one of many methods that Holly Holm used to hinder Rousey's usual bullrush.

However it is worth noting that Cyborg on the feet is stylistically the kind of fighter that Rousey always had her best success against. She plants her feet and squares her hips to throw powerful rights and wide, swinging lefts. Rousey's most exploitable shortcoming has always been her footwork. Even Bethe Correia showed how heavily Rousey commits on her right hand, her energy consuming bull rushes, and her slow turning circle in that squash match back in August 2015.

But Cyborg is not swift-of-foot and has never had to care about ringcraft. She stand and trades right hands, and hopes that hers turns out better—using the double collar tie to maul her opponent with knees if the chance presents itself. And that is what makes this match up so fascinating—the reliance both have on their heavy right hand and very limited concern for defense. Rousey has been susceptible as she steps in with her long jab, and in the aftermath of her right hand. Cyborg's dropping left hand opened her up to a couple of crisp counter rights by the veteran Marloes Coenen.

But with the way both tend to lead with their faces and jab only out of habit, the world's most high profile double knockout would certainly not be out of the question.

In Cyborg Santos versus Ronda Rousey you are looking at a match up which should favor the fighter who wants the clinch. Santos is not likely to make Rousey work to catch her, and when she tries to fight off the clinch it will probably be with her hands and hips, not with her footwork. But Santos is such a powerful and sizeable fighter and Rousey has never been evasive, more gritty and overwhelming. That is the key word here 'overwhelming', it is the word you would use to describe both Rousey and Cyborg. While the fight seems unlikely to ever take place there are only two real questions: how well can Cyborg cope in the clinch when she inevitably gives it away, and can Rousey do anything in the clinch if she has to take shots like these to get there? Certainly Rousey seemed to diminish in effectiveness the longer her fights went and the more knocks her confidence took.

But with Rousey in unofficial retirement and Cyborg fighting opponents that many fans have never heard of, it makes you wonder if the UFC are just keeping Cyborg warm as they negotiate Rousey back into action for this belated superfight. And more importantly it makes you wonder what on earth is their plan for Cyborg if Rousey cannot be tempted back into the cage?

Return of the Menace: How Michael Johnson Starched Dustin Poirier

Why Does Nobody Care About Rico Verhoeven?

Waiting for Uriah: Strange Decisions and the Occasional Spinning Knockout