A Case (As If It Was Necessary) For Ronda Rousey 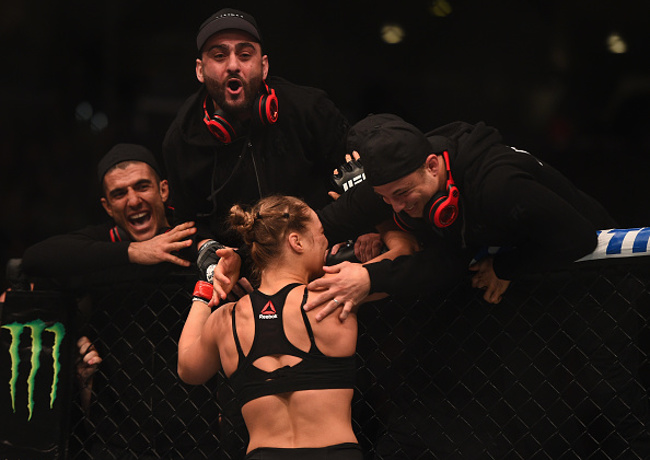 Well, if somehow you were still in doubt as to whether or not Ronda Rousey is not one of the greatest athletes in the world—not just in mixed martial arts—Saturday night in Los Angeles’ Staples Center should leave no trace, not a shadow of a doubt in any hater.

So hop on the Ronda bandwagon already, there’s enough room in here for everyone. And before someone goes ahead and calls this a Ronda fluff piece, or says we’re just a bunch of fan boys, I’ll go ahead and tell you that we DGAF. Ronda is rowdy. Ronda is one of the most exciting people to watch in all of sports—even if her performances often last a fraction of the duration of other sporting events. Watching Ronda is watching Greatness happen. Those few seconds of watching Ronda Rousey are ecstatic, they stretch the imagination of fans around the world as they ask themselves, “How?” People only ask that question of individuals like Kobe Bryant and Leo Messi.

Cat Zingano is one of the best fighters in all of mixed martial arts. She was touted as Ronda’s toughest opposition yet—a categorization she’s not the first recipient of—and an opponent fans were extremely excited and nervous (what if Ronda lost) to see face the mighty Ronda Rousey. Unfortunately, she made the mistake of rushing the current champ as soon as John McCarthy said “fight” and got caught up in one of the craziest, most beautiful and elegant submissions anyone’s ever seen. Ronda was as fluid as ever in her delivery.

Look, at the very least, Cat Zingano was—and still is—a tough enough opponent to last longer than 14 seconds in the Octagon with Ronda. But that’s what happened. While official results saw Cat tapped out with 14 seconds on the clock, the actual number of seconds in which Ronda beat Cat was 12 seconds and 10 milliseconds.

Here are some further fascinating facts from this fight, and where they put Ronda Rousey in the bigger scheme of things:

Ronda’s victory over Cat at UFC 184 went down in the books as the fastest win in a UFC title dispute. This fight for Ronda’s bantamweight title belt also went down in history as the very first UFC title fight in which no strikes were made.

With this win, Ronda has won 10 of her 11 fights in the first round. Eight of those fights were won in under a minute of fighting. In his 20 years of boxing professionally, the legend himself, the man who reminded us to Be Real, Mike Tyson had nine wins in under one minute. The fallen hero Anderson Silva only has one win accomplished in under a minute, versus Chris Leben in 2008.

Also, Ronda is now the first athlete in the Ultimate Fighting Championship to win two contests in under 20 seconds. The first time she pulled that off was against Alexis Davis, whom she beat in 16 seconds, and was also one of her other “toughest opponents yet.” She’s also the only fighter in the UFC’s history with three title defenses accomplished in under a minute.

Now, in front of thousands of ecstatic Ronda fans, one of the world’s best ever, Ronda Rousey, said she’s down to take on Holly next. Holly looked good, and despite her win over Raquel Pennington having been a split decision, she looks like in a couple of more fights, she might really have all it takes to truly take Ronda out for a hard spin.

Let’s not have them fight each other yet, though. Holly needs time to adjust. But then again, who else could Ronda fight? Miesha Tate a third time? Another shot for the battling Cat Zingano?

Or Cyborg. Please, let's see that one.