A Case for Luke Getting the Title Shot Before Jacaré 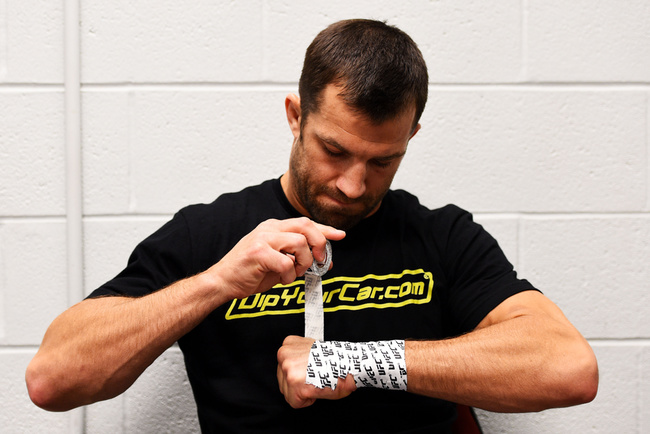 Regardless of position in the UFC’s middleweight ladder—Jacaré Souza is the number one middleweight contender and Luke Rockhold the fourth—Saturday night’s #UFCNewJersey spelled out a different future than the rankings predicted. Luke Rockhold absolutely stole the thunder and most likely will end up snatching up the title shot which Jacaré—under any other circumstance—would have gotten.

After the fight, UFC head honcho Dana White was very diplomatic. Both Jacaré and Luke delivered impressive performances, so impressive on both ends that White had no answer as to who would challenge Chris Weidman’s middleweight strap. To White, both men were spectacular, so the UFC is in a position where, according to White, "we've got two guys who looked unbelievable who could fight next for the title. It's a good problem to have." Dana explained that they would wait and see how the Weidman vs. Belfort fight went, and then they would decide.

With that in mind, however, did Luke not deliver a significantly more dominant victory after all things have been considered? In assessing this question there are a few points to discuss.

For starters, no fighter ever beat Lyoto Machida in such fashion. Not even the current middleweight champ Chris Weidman. What Luke did to the Dragon is the stuff of legend, a unicorn in mixed martial arts. This is Lyoto’s worst loss since Jon Jones put him to sleep in December of 2011. When Lyoto fought Chris Weidman, both fighters delivered fantastic performances—it was a hard fight for both guys—and in the end Lyoto’s loss came by points. To give it some perspective, this was in July of 2014, less than a year ago, which quite vividly frames the possibilities of what can happen when Luke faces Chris Weidman.

Another reason Luke will most likely get the shot is that he has already defeated Jacaré in the past. He defeated the Brazilian jiu jitsu star under the Strikeforce flag in 2011 in a decision win. At the time, Luke stripped Jacaré of his Strikeforce middleweight title belt.

Then there are both fighters’ records. Again, Luke had Lyoto as his opponent, while Jacaré had Chris Camozzi—someone he’d already beaten once before and someone whom the UFC had fired before bringing back in a last minute move. Furthermore, by scheduling both Luke and Jacaré on the same card, the UFC was able to see at once the moment both middleweights are living. Both had great performances ending in triumphs, but the difference in caliber of opponents screams too loud for it not to be considered. Before Saturday, Jacaré defeated Yushin Okami, Francis Carmont and Gegard Mousasi. Luke, on the other hand, is coming off a somewhat more heated streak, defeating Costas Philloppou, Tim Boetsch and Michael Bisping.

Jacaré also had the pneumonia that forced him to postpone his fight, and then Yoel got injured. Things happen, this bad luck definitely disrupted a bit of the man’s momentum, even if he’s still fighting like a g.

Beyond these fight-facts, the UFC is working on getting New York City its very first Ultimate Fighting Championship event. Dana White has confirmed that there is a reserved date for such the historic moment and supposedly it’s in December. When Joe Rogan interviewed Luke after his fight, he called out Weidman and demanded that he do his job and beat Vitor and also that he’s ready to make history in New York City. If we’re honest, it would make a lot more sense for the UFC to slate their first NYC event with a duel of two All-American boys. No disrespect to Jacaré, it just seems more appropriate. It would most likely be more interesting to the fans. Moreover, Luke would undeniably sell the fight more. Jacaré is a reserved guy.

Speaking of which, where was Jacaré’s post-victory interview with Joe Rogan? More often than not, victorious contenders take that microphone time to get their wishes out there, to request their earned title-shot. Could’ve been a transmission issue, but without being able to challenge Weidman on the mic right then and there, in the heat of the moment, Jacaré missed a big opportunity.

With that in mind, and if Luke does get the title shot before Jacaré, it would be awesome to save a rematch for the two of them in the near future. Were Luke to defeat Chris Weidman, Jacaré should be the one to challenge him first. There’s some other names for Jacaré to take on. Middleweight is deep, certainly he could just show a bunch of other dudes up again.

At the time this piece was written, Luke Rockhold was still number four in the official UFC middleweight rankings. He became the number one contender a few hours after this piece was published.