A Collection of Pro Wrestling Moves That Deserve Serious Analysis 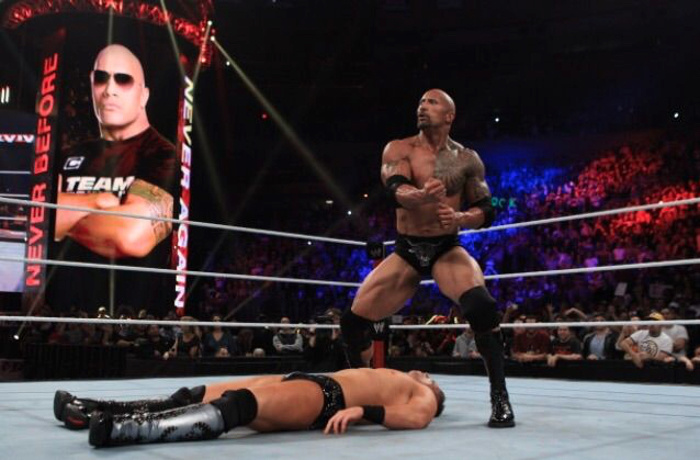 Professional wrestling isn’t real. We all know that. It’s just that some of us understand and appreciate that realism was never really the movement or genre for this particular art form. Pro wrestling is magical realism. It takes fantastical elements—like wildly acrobatic attacks and the need for keeping cheese graters stored under fighting surfaces—and places them in a world of fighting, feuds, and honor not that far removed from our own.

And, like all good works of magical realism, the strange parts work best when they are guided by a strong sense of internal logic. Which is why it was so satisfying to see Stone Cold Steve Austin deliver such a detailed and only slightly cheeky analysis of his most beloved move, the Stone Cold Stunner on the latest episode of his podcast, The Steve Austin Show.

The ten minute dissertation, which tackles everything from the mechanics of the setup (you kick your opponent’s gut both to get them into position and to disorient them by disrupting their oxygen intake), the actual strike involved (you drive your shoulder—specifically the acromioclavicular joint, into your opponent’s jaw like an uppercut), and the importance of the fighting/landing surface (a sprung wrestling ring intensifies the impact), is everything that good wrestling should be. It’s serious but self-aware. It’s too ridiculous to try in an actual fight of any kind, but starts to make a lot of sense once you suspend a modicum of disbelief. And it’s highly entertaining.

While intensely analyzing the silliest of pro wrestling moves isn’t exactly groundbreaking—Mick Foley has been providing the logical reasoning behind the Socko Claw for ages now—Stone Cold’s stunning Stunner monologue is still a welcome addition to the collective artistic efforts of the pro wrestling world. It’s also a treatment that we’d like to see given to more absurd and wonderful moves in the future, like:

The devastating power of The Rock’s beloved finishing move clearly lies in his olecranon process. Why else would he need to unsheathe it from his elbow pad before executing the move? But what advantage is gained by the multiple running dissections of the ring? Is the most electrifying man in sports (and) entertainment cooking physical energy? Metaphysical energy? There’s clearly need for further analysis here.

And while we’re on the subject of The Rock, it would also be interesting to look into why the Stone Cold Stunner makes him bounce, flop like a gutted fish out of water, and die while it only makes everyone else bounce and die. Is it an issue of size and weight distribution?

I’m assuming that the real-life principles behind the Superman punch, which travels parallel to the fighting surface, will also apply to John Cena’s punch when it’s thrown perpendicular to said surface. That seems like decent wrestling logic. But what of the various arm-based routines that go into setting up the move, including his famous “U can’t see me” taunt? Are they strictly a psychological attack, or is some other force at work?

“How is this allowed in a regularly-sanctioned match?” is probably the more pertinent question here, as the physical attack here is pretty straightforward. Anyone who’s ever had the misfortune of training with some asshole who won’t wash his gi because it psychs out and/or causes great gastrointestinal distress to his opponents/rolling partners can attest to just how disarming body odor can be when it’s weaponized against you. But I am curious as to what the primary issue behind the psychological devastation of the move? Is it fat-phobia, because the ass coming at you is larger than average? Is it an insult to your honor, because what could be more insulting than your opponent literally rubbing your face in his ass? Or is it homophobia? Because you’re being shoved face-first into a same-sex ass? Or it simply the fact that it’s assault?

In the above clip, JR boils X-Pac’s favored attack down to an issue of humiliation. In that case, all of the questions that apply to the Stink Face also apply to this. But there is one further issue: what possible risk analysis could one do that would result in the argument that the act quasi-tea bagging your opponent is worth the inevitable junk damage you’ll sustain in the process?

With all due respect to women’s wrestling icon and perfect muscular angel Trish Stratus, this a move that doesn’t just bend physics; it bends pro wrestling physics. It takes the momentum that makes the hurricanrana remotely plausible and... replaces them with an even more tenuous grasp on your opponent’s head?  And, given that at least part of the execution appears to rely on said opponent grabbing your legs in an attempt to break free, what would happen if they just didn’t touch your legs at all?

The actual strike at the end of much-derided Scotty 2 Hotty’s much-derided finisher likely works in the same way that Cena’s Five Knuckle Shuffle does. But where Cena bounces off the ropes and flows right into his various ritualized limb-wavings before dropping, 2 Hotty stops dead after doing the actual worm portion of the worm. Is it because he has stored all of his energy up in his body like the second-rate video game character that he resembles? Also, is the one-legged hop portion of the pre-worm prologue a plyometric thing?

Just kidding. This classic move that enjoyed an Antonio Cesaro-led revival in the earlier part of this decade clearly makes 100% perfect sense in their world and in ours.

Meet the American Pro Wrestler Who Plays a Trump-Loving Heel. In Mexico.