A Farang at Lamnamoon Muay Thai 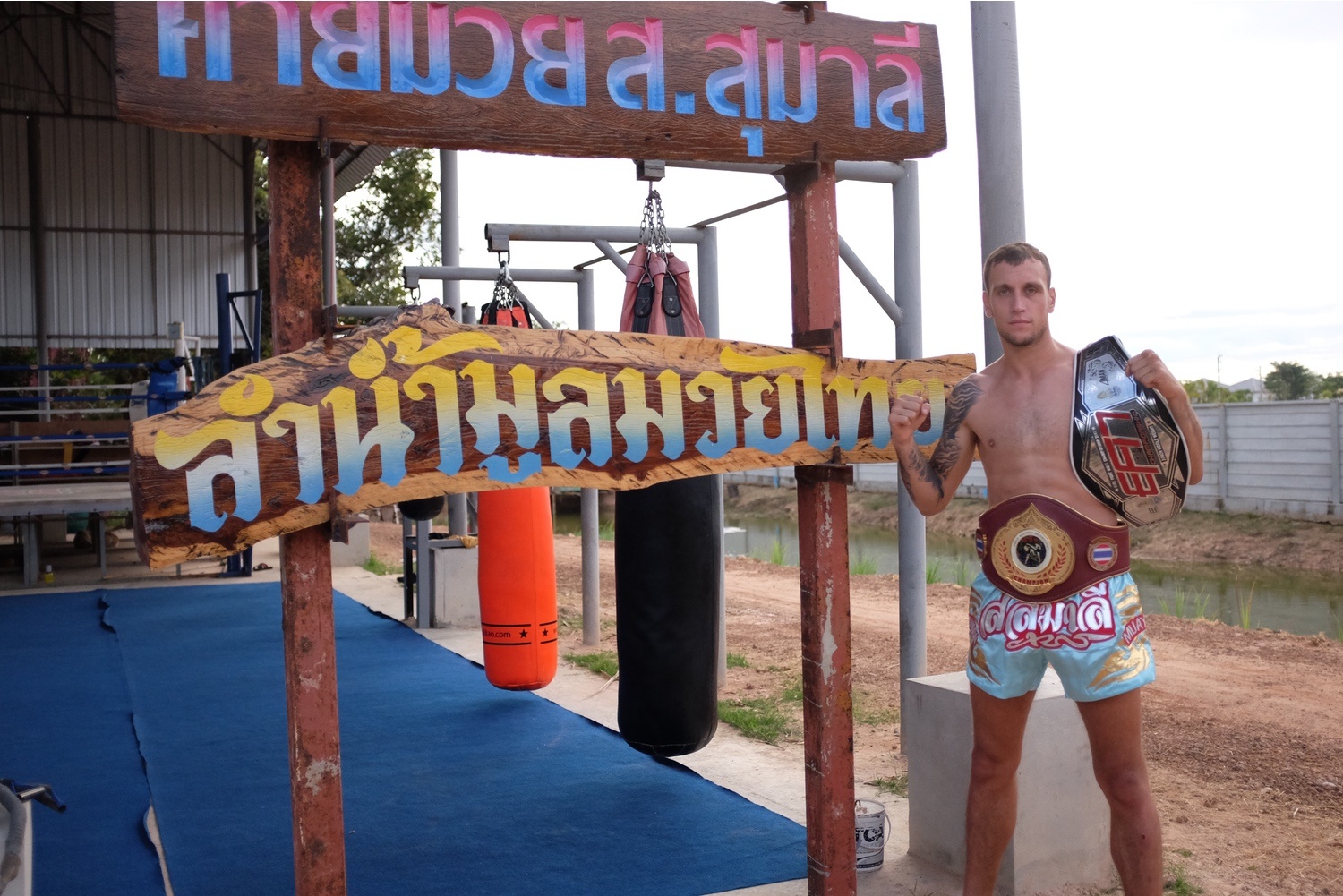 Isaan, Thailand's northeast region, is the poorest and most under developed part of Thailand. The area's deep-seeded poverty and lack of access causes it to significantly lag behind national averages in terms of GDP and education. Drug and gang violence, rarely acknowledged by the government, kill and maim the local youth. With many working age adults forced to move away to other parts of Thailand, especially Bangkok, for employment, the elderly are left with the difficult task of caring for millions of school aged children.

Sean Kearney, a young Thai boxer from Canada, didn't know any of this. Instead, he met a man named Peter Kent, a gym owner in Australia, who told him he would get better training in Isaan than he was currently getting in Bangkok. He bought a one-way bus ticket to Ubon Ratchathani to train and fight. Sean had never traveled beyond Bangkok before and had no idea what to expect. With a positive attitude and an eagerness to fight, Sean was met by Kru Yo.

"You kick no good. You want to fight tomorrow?" Kru Yo is no average instructor. He was a golden era fighter. Known for his knees, he won Lumpini titles in three separate weight classes and was also a WPKL Champion. His upbringing was typical of a Thai born into a family of rice farmers in the impoverished area of Isaan. It was his father who encouraged him to fight and so he began at a very young age at Sit. Pongtep. His older brother was already training there, so when he was old enough his Dad sent him as well. Once he made a name for himself locally, he was invited to train at the well-known Sor. Sumalee gym in Ubon Ratchathani. During the golden era, the gym regularly sent fighters to the stadia of Bangkok. In itself no small feat. The golden era, as its name implies, was the most competitive time to be a fighter in Thailand. Opportunities in Bangkok were reserved only for the elite level fighters. Kru Yo took the name Lamnamoon Sor. Sumalee and fought there for the remainder of his career. Wanting to show his dedication, Sean fought the very next day. Since then, he has fought more than twenty-five times in the countryside and now regularly travels to Bangkok to fight on various high level promotions like Thai Fight and at Omnoi Stadium. He recently won a 4-man tournament in Malaysia and just fought in the finals of the Thai fight tournament against P.T.T. Petch Rung Ruang. But according to Sean, having more than 25 fights in the countryside of Isaan was largely beneficial to his success internationally.

"I feel that fighting in Isaan can be very beneficial to developing as a fighter, especially if you want to be successful in Thailand. You end up fighting all kinds of fighters, younger less experienced guys who are strong and fit, older unfit guys with hundreds of fights, knee fighters, southpaws, punchers, etc. You also get experience with the system of gambling which highly influences the fights at the stadiums in Thailand." When Sean first arrived in Ubon, he and Kru Yo were training at the old Sor. Sumalee. It was a drastic change from what Sean was used to. The comforts of Canada were long gone with no air conditioning and no running water in the bathroom. Sean would sneak away between training sessions and try to find an Internet cafe where he could stay for an hour. Nowadays, a lot has changed for Kru Yo. Using money he earned and saved while working at Evolve MMA in Singapore, Kru Yo built his own gym on his parent's land. The accommodation for fighters is, as Sean describes, amazing. And due to major technological advancements in Thailand, specifically in the countryside, having a cell phone is extremely affordable and data service is available everywhere. The location is also a major positive as it lies on the outskirts of Ubon City, close enough for the fighters to be able to enjoy a trip into town.

The gym prides itself on being able to provide instruction and opportunity to the youth of Thailand, who are just starting off their career, while at the same time sending a stable mate of fighters to compete internationally and in the large stadiums and televised shows in Bangkok. It's not easy to manage. You have kids that require a lot of attention and instruction, foreigners whose needs are different, and then a few high level Thais that require a lot of energy. So far it's working. As it stands right now, the gym is home to three of the best foreign fighters in Thailand: Sean Kearney, Jordan Coe, and Kurt Staiti.

Jordan Coe won the 2016 Trailblazer Award out of all the U.K fighters living and fighting abroad and recently made waves scoring a decisive victory at Rebellion 13 in Melbourne, Australia. Kurt, on the other hand, is the current silver belt champion at Max Muay Thai in Thailand. Lamnamoon Muay Thai gym has only been open now for 2 years, but the balance of countryside training and international opportunities seems to be working for the gym. There are about a dozen Thai fighters, the majority of who are still in school and commute to the gym daily. Foreigners come and go, but so far the gym has been able to keep a handful of them training regularly. With the social, economical, and political problems in Isaan, it's refreshing to see a gym so invested in the local community while at the same time accommodating to foreigners. The presence of foreigners at the gym, and the international exposure they are gaining, is no doubt having a positive impact on the surrounding area. And with Muay Thai tourism, possibly at its peak, it's important for other areas to benefit from the economic advantages. Additionally, it provides invaluable insight for foreigners enamored with Muay Thai into the living conditions and hardships the local fighters must endure on their journey to the top.

In Praise of Mr. Lek: The Craft of an Authentic Muay Thai Coach