A Fired Up Dustin Poirier Prevails in a Week of Wins 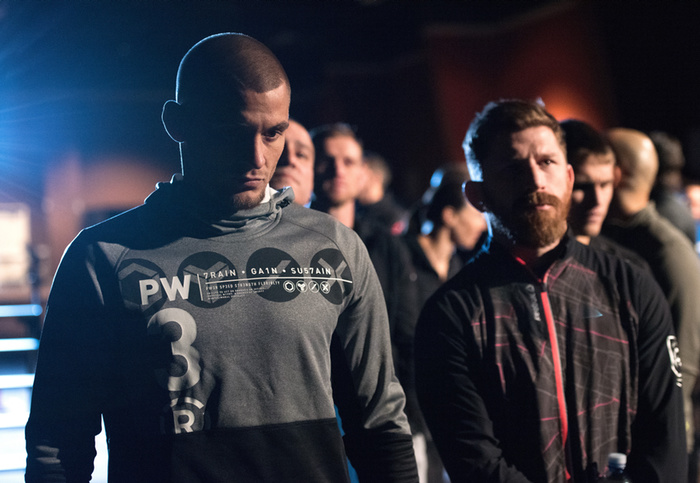 Eyebrows were raised when it was announced Dustin Poirier’s fight against rising Irish star Joe Duffy would be on the preliminary card of UFC 195, broadcast on the UFC’s Fight Pass streaming service.

There was solid reasoning for this, with UFC president Dana White explaining the decision was made due to many UFC fans signing up to Fight Pass membership to watch their bout originally slated for October at UFC Fight Night 76 in Dublin, Ireland. The UFC brass was also thinking this would be a good move for Fight Pass with the fight’s relatively early start time catering to the large, on-looking European audience.

The fight was postponed by a couple of months due to Duffy suffering a concussion during a sparring session and had to pull out of the fight just three days before the event was due at the 3 Arena.

Duffy was the bookies’ favorite for their contest having just two outings in the UFC. They were, however, impressive showings. While Poirier claimed to have not been affected by being named the underdog, it clearly motivated the American Top Team product as showcased in his interviews leading up to the fight in both October and December/January ahead of UFC 195.

We have seen this before, though. “The Diamond” has never been short on self-confidence and was more than motivated for his contest against the mercurial Conor McGregor—Duffy’s compatriot. Poirier came up short in that fight against McGregor and there were some rumblings that Poirier was being fed to another potential Irish champion in Duffy as the UFC attempt to produce another gem from the Emerald Isle.

The McGregor and Duffy fights for Poirier had plenty of parallels. The UFC Embedded YouTube series for both fights showcased a Dustin Poirier with two sources of motivation: the former hatred for his opponent, the latter proving people wrong.

McGregor got the better of Poirier. But, this prompted the Louisiana native to move up in weight to lightweight and he has not looked back since with two TKO wins to his name since then. This momentum showed no signs of slowing after Poirier dominated Duffy, one of two men to have defeated McGregor, to a unanimous decision on Saturday night—almost five years to the day since Poirier’s UFC debut.

Poirier prevailed thanks to his persistent wrestling and subsequent ground attack, earning him an impressive 30-26, 30-27, 30-27 unanimous decision victory over a game Duffy who simply couldn’t handle his opponent’s pressure.

The first round proved the closest of the fight, with the Irishman’s boxing catching “The Diamond” on a number of occasions, leading to a nasty broken nose for Poirier. However, a combination of Poirier’s ever-increasing fight IQ and ATT’s expert coaching meant he changed up his approach to Duffy, pressuring his opponent with his superior wrestling skills.

Proving people wrong can be one of the healthiest incentives when coming into a fight. But, what people didn’t know was that Poirier and his wife discovered they were expecting a baby in the week leading to the Duffy fight.

Talking to Fox Sports’ Ariel Helwani, a victorious Poirier said: “Honestly, man. I just found out my wife is pregnant. It’s going to be my first child. I found out not too long ago—a week ago. This puts things in perspective. In the past, I over-thought things and cared too much if that makes any sense. Fighting is who I am, it’s what I love to do and I am so passionate about it that it overwhelms me. But, lately, as I just said, I don’t care.”

With the updated UFC rankings not yet released following UFC 195, Poirier presently sits at 12th in the lightweight division. While Duffy is not presently positioned within the top 15 himself, his undoubted talent and Poirier’s dominant victory over him will surely lead to “The Diamond” to the top 10 spot he has longed for in the lightweight reckoning.

After UFC 195 was all said and done, Dana White announced at the post-fight press conference that Poirier’s win was the highest-viewed contest featured on UFC Fight Pass in history, saying: “It broke the record. It’s the most-watched fight we’ve ever had on Fight Pass.”

To wrap it up, Poirier upset the odds by winning one of the most important fights in his career in brilliantly brutal fashion, smashing Fight Pass viewing records in doing so—a victory which could/should move him into the top 10 of the lightweight division rankings. Not only that, he discovered his wife is pregnant, expecting his first child. Not bad for a week’s work. Poirier prevails.

Duffy, Poirier, and the McGregor Effect