A Historic Night in the Bronx 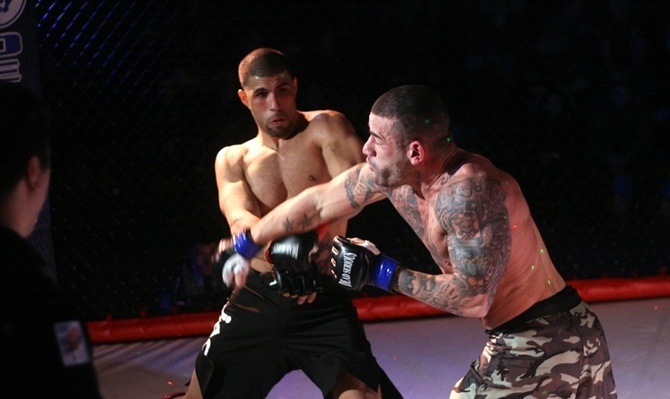 Gyms have long memories for victory. At St. Raymond’s High School in the Bronx there are rows of framed jerseys worn through championship seasons by students long since graduated, the banners for state championships hung around Rudyard Kipling quotes. Maybe by the time the class of 2099 graduates they’ll have installed a plaque too: On this site on the 26th day of January in the Year of Our Lord 2013, did our school host the first legally sanctioned amateur MMA event in New York State.

There was that kind of feeling of myth-making at St. Raymond’s last Saturday. From the Aggressive Combat Sports ring announcer reminding everyone that the event was a message to New York lawmakers that their constituents want legal fights to the way an opening 90 seconds of each fight made the crowd pop like they had money on every strike. Even the concessions stand serving canolis instead of popcorn felt right. They were less a pastry than a delicacy reserved for conquering barbarians.

The fights themselves came and went with the rhythm of a well-made LP. Grappling in one led to strikes in another led to the kind of explosive hits you want to see again in slow motion. It was as if the fighters had been told they wouldn’t have another fight after this one, not, at least, in one of the five boroughs.

“He doesn’t look like he has a sense of humor,” I said to Sambo Steve, the New York-based coach sitting next to me, as one intense fighter stared daggers into the crowd.

“You have to remember for a lot of these guys, this is the Garden. It might be the closest they get,” he said. “This could be the biggest night of their lives.”

Considering all the battles over legalizing MMA in New York over the last few years, Aggressive Combat Sports had a lot riding on a flawless night. Less than 48 hours before, the Association of Boxing Commissions had sent a letter to every major politician in the state, Gov. Andrew Cuomo included, asking for legalization and regulation. Without sanctioning, they claimed, the fight scene had “created a grave safety risk to both athletes and spectators not only within this State, but indeed throughout North America.”

Considering the historic significance of the occasion, the promoters couldn’t have planned the night better. Aside from an over reliance on the soundtrack to Rocky IV, the Aggressive Combat Sports card was filled with not just good fighters but charismatic ones. The uniformed police watching near the doors never had to draw their guns. It’s doubtful that anyone in the crowd even noticed the few times EMTs had to tend to a fighter because they were too busy cheering on the guy straddling the top of the cage to pay attention to the person who’d just been laid out with a vicious overhand right. The medics quietly took the prostrate in the back, checked him out, and gave him a clean bill of health. No one left in an ambulance.

“Raise your voices and let them know that New York wants MMA as we celebrate on this historic night,” the ring announcer said over and over again.

Where is MMA not having a moment right now? In the last 90 days alone, we’ve seen the UFC starting their first women’s division, the first legalized amateur fight in New York, the first openly gay fighter signed to a UFC contract, the first match sanctioned by the People’s Republic of China, perhaps the first gym opening in your hometown.

So when two men lock up in the basketball court of an all-boys Catholic High School in the Bronx without people worrying about the police department coming in like it was a prohibition era speakeasy, it feels both liberating and inevitable. Another flag planted by a sport that has so much momentum behind it that when UFC President Dana White talks about the UFC being bigger than the NFL and coming up on soccer it no longer come off as bragging. Because everyone knows it’s true.

“They’re going to come in here Monday and play basketball like nothing happened,” said some kid next to me squeezing through the crowd with his girlfriend. “Ain’t that crazy?”