A Japanese Fighter in Bangkok: Sota Komatsu and Ingram Gym 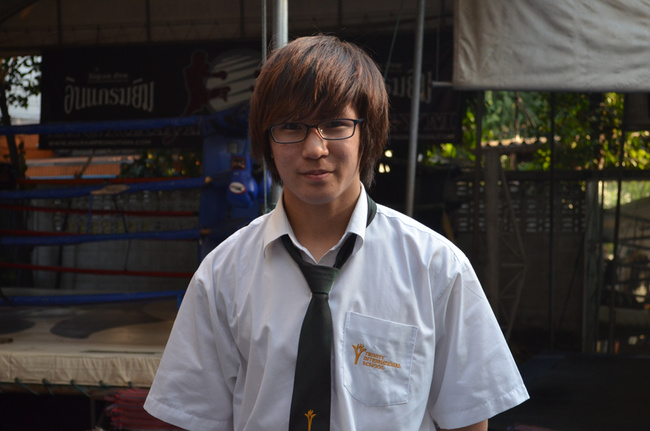 Class is dismissed and Sota Komatsu leaves his high school, headed home under the hot afternoon sun. Home for him the past two years has been a small gym in central Bangkok, in a room he shares with three other Japanese fighters. Once in his room, he switches his Trinity International School uniform to bright red Muay Thai shorts, his name embroidered on the leg, and reemerges into the Bangkok heat outside, jump rope in hand and ready to start training.

Like thousands of teenage fighters all over Thailand who leave home for gyms in distant cities, 17-year-old Sota Komatsu lives at Ingram Gym in Bangkok, far from his family in Yokohama, Japan. He's been training at the Japanese-owned gym for the last two years, attending high school and fighting frequently in Bangkok's most famous stadia. Just like many of his Thai peers, Sota lives, studies, and trains far from his family; the gym owner is his guardian.

But Sota's life is vastly different than other Thai fighters his age. He and his Thai counterparts may have the same technique, compete in the same stadia, and spend a comparable amount of time perfecting their skills in training, but the difference is that Sota has far more options. His future doesn't have to be Muay Thai, nor does he necessarily want it to be. He loves fighting, yet has no plans to continue fighting into adulthood, or become a trainer, or open his own gym. Instead, he says, he wants to be a businessman.

Only a tiny sliver of teenage fighters in Thailand have the same opportunities. Sota attends international school and learns English; many Thai fighters his age are dropouts. Most young Thai fighters I talk to dream of winning championship titles. Sota's immediate goal is to be accepted by a top university.

Sota's father first suggested training full-time in Thailand a few years ago. At first, Sota wasn't interested. "I said no, absolutely not. I didn't want to come to Thailand," he said. "I didn't like Thai people. I thought they were too rude and selfish." Sota's impressions of Thai culture had been formed earlier during short trips his family took to Thailand when he was in middle school.

It was one of those trips that Sota got a taste of professional fighting. He was 13, in seventh grade, when he first fought in Thailand, and immediately fell in love. Unlike in Japan, where a child his age would have to wear headgear and shinpads by regulation, Sota was allowed to fight a professional, unpadded bout just like the Thai kids. He'd already been training in martial arts for six years, having started karate when he was seven. But Muay Thai was what he really loved; unlike karate, which centered on forms and performance, Muay Thai was about fighting, techniques like elbows and knees were legal, and Sota felt a new freedom in the ring.

It wasn't enough to convince him to move to Thailand right off the bat, though. But a couple months after his father first proposed the move, Sota saw something on TV that changed his mind. It had nothing to do with Muay Thai. He watched a Japanese man speak English and Japanese fluently on TV, and decided he too wanted to learn English. His father told him he should go to Thailand, train Muay Thai, and enroll in an international school where he could also study English.

Of all the reasons I've heard for coming to Thailand, especially for fighters, studying English has never been one. Regardless, Sota's father was pleased his son had finally agreed to go. Sota packed his bags. Only fifteen years old, he was moving alone across an ocean.

Sota's first year at Ingram was spent focusing on Muay Thai, fighting once a month on average. Ingram helped him find matches in well known venues like Lumpinee, Rajadamnern, and MBK. He was even given the opportunity to fight three opponents from Thailand's prison fights, a program in which fighters on the outside are matched up with inmates who train. Fighting in prison was a departure for the quiet Japanese teenager. "I was scared when I got into the ring with each prisoner," he said. "They all had full body tattoos."

The day I visited him at Ingram, he looked like the Japanese Muay Thai version of Clark Kent and Superman. I watched a shaggy-haired, bespectacled kid in a slightly ill-fitting uniform transform into a brilliant technical fighter. The way he moved in clinching and padwork, it was almost as if you could see that inevitable future full of championship titles in front of him.

My friend Robin Rutenberg, an American businessman in his late 30s, was the one who introduced us. He and Sota had been training together off and on for the past year. "I didn't notice Sota the first time I met him," Robin told me, describing Sota as blending into the background, like so many Japanese tourists who come through Ingram to train casually.

Then one day, about a year ago, large American Robin was paired up in sparring with compact Sota for the first time. Robin's Brazilian friend Jos Mendonca, one of Ingram's main fighters, pulled him aside and gave him a brief rundown of Sota. "He has good technique," Jos said. "And he is very strong."

"Jos wasn't lying," Robin laughed. "Sota may be quiet with an unassuming demeanor, but he was throwing me on the floor and kicking me at will. I'm 92 kg and strong, but Sota was able to manipulate my weight and strength like a matador." 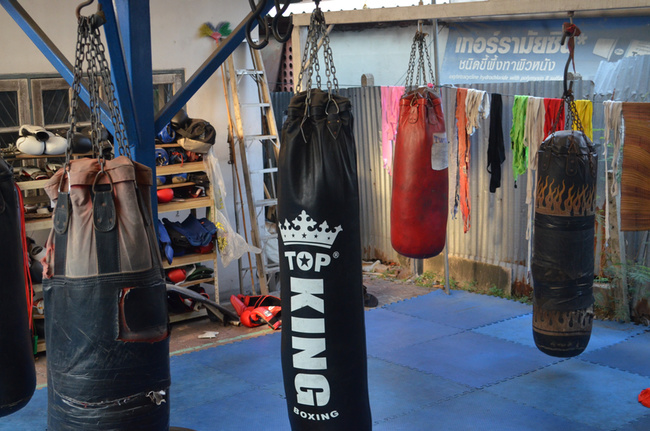 How far could someone like Sota go in Muay Thai? With his clear talent and strong work ethic, probably pretty far. But like so many promising young athletes in their teen years, his priorities are shifting away from the sport. Now he focuses primarily on his studies. He devotes a few afternoons a week to TOEFL classes and other tutoring for university admissions. "I've had to take a break from fighting because I'm studying in school really hard now and am applying to colleges," he said, mentioning prestigious universities in Japan. When I asked about his biggest fear, without hesitation he said it's getting an F in school. "It'll make the university not want me."

It's been a few months since Sota last fought. His mop of hair gives him away. It's grown long since he last had to cut it for a fight in one of Bangkok's famous rings. Long hair doesn't bother him during training, though. He executes his beautiful form in padwork and throws around men twice his size in clinching with no thought to the hair he pushes out of his eyes.

In a country where most fighters attend local public schools or no school at all, Sota is part of a ridiculously small minority of professional Muay Thai fighters studying in an international school. It's a true mishmash of cultural education for him. In history class, Sota is learning primarily about American history. Despite going to school in Thailand for the last two years, he reports never having studied Thai history. "I haven't learned much Japanese history either," he said, "but I've learned about 100 years' worth of European history." His only class not taught in English is a single Thai language class. 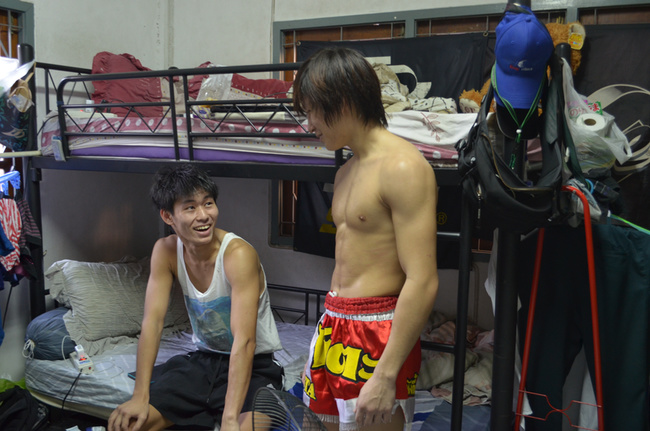 At an age when identity is classically challenged and developed, Sota's life is further complicated by the divide between being a Japanese student at an international school with dreams of a successful business career, and life as an athlete in a sport largely seen as lower-class. Unlike many of his Thai peers, Sota didn't grow up poor in rural Thailand, forming surrogate families with other Thai fighters from similar backgrounds. Instead, his early years were spent in Japan, going to school and practicing karate. Most of Sota's friends and family don't relate to his Muay Thai life. Sota still keeps in touch with some old friends in Japan, but they don't talk much about Muay Thai. Friends at the international school are similar -- his classmates aren't fighters, and thus cannot fully comprehend his training lifestyle. "Some of my classmates say they're scared of me," he laughed. "No one really gets into fights at my school, but some of the boys say things to me like, 'Don't hit me! Don't hit me!' The girls don't care, though. They're not scared of me."

Sota is one of the youngest resident fighters at Ingram. He lives with three roommates between the ages of 19 and 29. Sota showed me his room, apologized for it being so messy and made to clean it quickly.

He reiterated over and over how much he loved fighting, but not necessarily training. And surprisingly, for someone who has already devoted so much to the sport, Sota never mentioned Thailand and Muay Thai when we discussed his future.

"What do you like most about living and training in Thailand?" 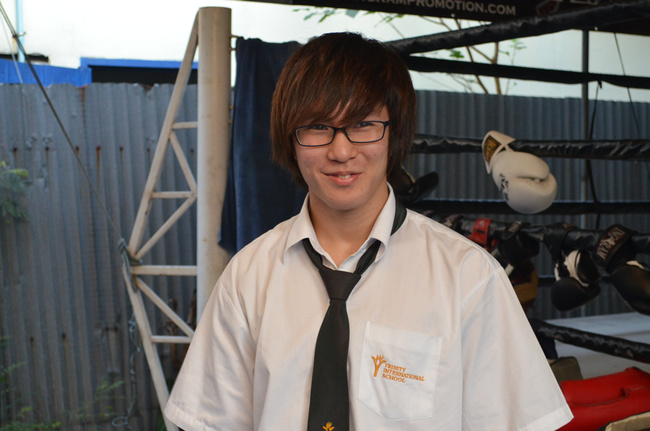 Sota calls his parents after every fight to tell him the result. In the couple years he's been living in Thailand, his family has come to visit him once. They stayed four days, but not long enough to see a fight. "My family has never watched me fight," he said, "and I don't want them to. I don't want to lose in front of them."

He doesn't lose often. He fights in top stadia and wins more often than not. I can't even imagine having his kind of talent. Does he appreciate what he has? What he could become?

I asked Sota directly if he thought he was a good fighter. He considered the question briefly, said, "Mmm, there are a lot of people who are stronger than I am."

"What do your coaches tell you?" I asked. "Do they tell you you're a good fighter or bad?

"Some kind trainers say I am good," he said with a shy smile.

"Are most of the trainers kind?"

After a pause, he said, "There are only kind trainers."

The Long Road to Bangkok: A Young Fighter's Struggle to Win in the Capital

Sitmonchai Gym and the Balance of Cultures