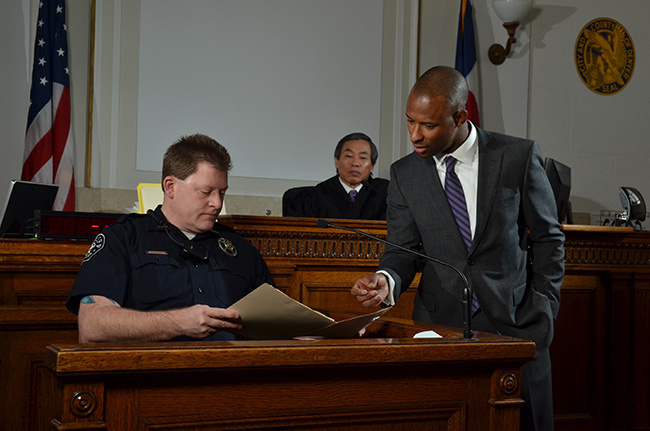 Imagine you’re a 19 year-old kid living in Denver and you’ve just been caught selling drugs for the third time. You're sitting in a cold, concrete walled pod with all the other inmates wearing orange scrubs and crock-type slippers. The sheriff walks in and tells you that your state-assigned public defender has arrived.

You must be thinking, “Wonderful, my future relies on what must be some down-on-their-luck, middle-aged, leftist-idealist, sleep-deprived, afraid-to go-to-trial, piece-of-shit public pretender.”

The bars open and you walk down the hallway feeling dejected. Much to your surprise, though, when you get to the meeting room, sitting at the desk in front of you is a young guy with cauliflower ears and a lean muscular frame. He can’t even get his wedding ring on because all the knuckles have been broken on his mangled hands. Today he happens to have a black eye and abrasions on his neck from training in a gi. 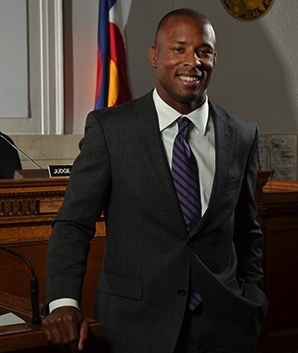 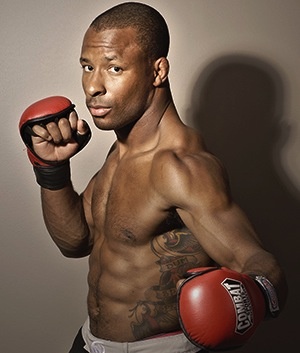 Tyrone Glover--or “that black UFC fighter,” as he is sometimes called in the legal circles of Colorado--is an ex-professional MMA fighter. He grew up in Sacramento, California and is of the first vintage of strong American wrestlers that excelled after learning Brazilian jiu-jitsu. In 2005, after beating Din Thomas in Japanese promotion Dream, Tyrone abruptly left the sport, moved to Colorado, and entered law school. But, as is often the case with athletes struggling to move on from their sport, it wasn’t a clean break. Five years later, after graduating law school and finding himself working for a corporate law firm, Tyrone returned to MMA.

He entered several smaller shows to make sure that he could still be competitive and have time to train. He did, and it seemed to be going well. But suddenly, after winning a fight in Canada in 2011, Tyrone announced that he would not only be retiring again from professional MMA but also moving on from his job as a corporate lawyer for the lower-paying life of a public defender.

We caught up with Tyrone to ask him about his decision and his new life fighting for the accused.

Fightland: Is this just another Jay Z-style faux retirement?  Are you going to return with the number 45 like Michael Jordan?
Tyrone Glover: No, this time it’s for good. I always had this idea that I could have these two circles in my life--one circle would be all the fighting stuff I did and the other would be where my career focus was--but it just wasn’t the answer. I didn’t feel completely fulfilled in either category. It was getting me 80 percent of the way there. I thought that having those two things would be the answer as long as I was doing both, but I needed something in my life to bring the two together. There was the void of overlap. If you think of a Venn diagram, there was no middle.

I remembered a conversation I had with my legal writing professor: He had told me that as a former athlete I would never get the same rush, the same feeling of competition, unless I became a trial lawyer. At the time, there were a lot of omens pointing me in the direction of trial law.

So, you are in the middle of your Venn diagram now. Where does trial law overlap with mixed martial arts?
A big reason why I choose public defense as opposed to being a district attorney has to do a lot with my fighting background.

There’s that saying that fighters aren’t made, they are born--and I don’t think that necessarily means you are born with a certain skill set that makes you a good fighter. It’s a certain mentality. Most of a fighter’s career is spent climbing the ranks. They go through long grinding training camps. They deal day in and day out with hard, gut-wrenching training and struggle through injury. And at the end of the day, after all this hard work and adversity, they have to face off against an opponent that is favored to win.

Regardless of my politics, public defense fits that mentality. As a prosecutor, you are supposed to win. You are supposed to know that you can prove your case beyond a reasonable doubt or you are not suppose to bring it to trial. A district attorney’s job is to make sure that the state proves that burden of truth. There is presumption going into trial that the state should win. And if they don’t win, then that’s a miscalculation on their part.

It's funny: Before big jury trials I have caught myself cracking my neck, my knuckles, and pacing the same way I used to backstage before a fight. The focus I have is exactly the same. I get that same eerie calm you get before the battle off an MMA bout. Fighters love being in that zone of composure despite overwhelming emotion. I get in that zone in trial all the time.

Who do you find yourself defending most often?
It's poor black folks who deal with gangs, mental health issues, drugs and alcohol, and poverty. It's black men without fathers, with mothers who have just have way too much on their plate. It's Hispanic folks with all the same issues and then on top of that have to worry about deportation consequences, and have a language barrier. It's people who are struggling for second-class citizenship, that have had bad breaks their entire lives.

Attorney General Eric Holder spoke recently about excessive prosecution and sentencing of low-level drug offenders.  Are you experiencing this problem in Colorado?
In Colorado, there has been a big improvement since they decriminalized marijuana because it had given police a reason to contact people and it contributed to a lot of nonviolent folks being criminalized and introduced to the system. It’s better, but you still see people who got caught with 20 dollars worth of crack and are facing a minimum of 10 years in prison for a non-violent offense.

I’m not getting clients who are high-level or even mid-level people. What we really see is poor people trying to nickel and dime some drugs to get by. There are a lot of people with undiagnosed mental disorders who are self-medicating. I’m also seeing a lot of immigrants being brought here by drug cartels: 17-year-old kids from Honduras who are trapped and put to work selling small amounts of heroin and are used as mules or bag guys. That kind of stuff.

Distribution of drugs is an aggravated felony the same way that robbery is. So for you to sell 20 dollars of cocaine to an undercover officer it is viewed the same, in the eyes of the law, as robbing someone at gun point where someone could get killed. Is society saying we need both of these people off the street to the same degree? I sure don’t.

It’s pretty easy for the state to prove a 20-dollar hand-to-hand; the jury is going to say that person is guilty. But if they had known that the offender was homeless and on parole when he sold that rock to the police officer … they might not be as comfortable with the situation. Disproportionate drug sentencing is messing everything up.

What makes you different than other public defense attorneys?
It’s the way I interact with the whole system coming from something as adversarial as MMA. I am pitted up against great prosecutors, and we are fighting over really important and emotional situations. It can get very intense and challenging to keep my composure. But I used to get in a cage with guys who wanted to break my face. I have a certain calm about the process because I was in the fire of fighting since I was 12 years old.

I try to be the truest version of myself when I am in court. I have my game face on and I let my clients know right off the bat that I am down to scrap for them. Once that is clear, I talk about what makes the most sense for them and the case. Like an MMA fight, you are given an opponent, a set of facts, and rules of engagement. I can’t throw the case out or pick a different opponent. I can only execute the best strategy to give my client the best odds of protecting themselves.

I still feel like I am living the life of a fighter, but this time I’m not just fighting for my own glorification. I am fighting to represent people who are not the sum total of the things that they have done. They deserve representation and effective assistance in counsel. I meet them at that last point where maybe they are going to get dumped off the conveyer belt. But not before someone like me puts up a fight, respects their liberty, and makes sure they have a fair trial.