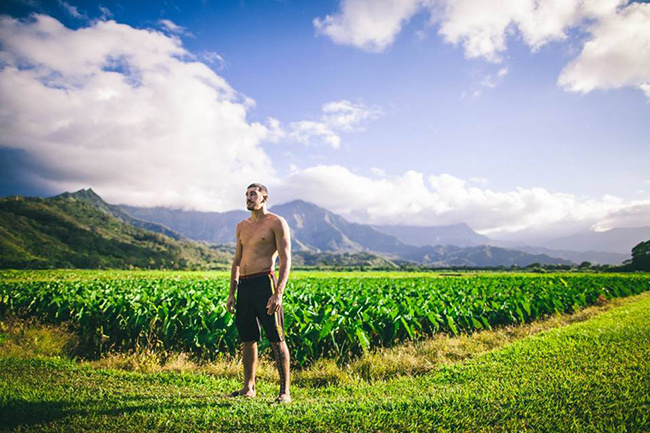 Dustin Barca doesn’t get along with Corporate America. In 2009, the standout waterman from Hawaii dropped off the professional surfing tour citing that he no longer wanted to surf, or conduct himself in the way that mainland sponsorship companies wanted him to. He didn’t try to re-qualify the next year and instead transitioned to mixed martial arts. Five years later, Barca is now a pro-MMA fighter, a full-time activist, and a grassroots organizer hell-bent on ridding Hawaii of biotech firms like Monsanto.

"My whole life I’ve been a punchy kid, getting into trouble. Mixed martial arts really changed me," Barca tells me from his house on Kauai. "As I got older, I started to approach my life in more of that jiu-jitsu style--confident and ready for whatever, but always looking at things humbly and respectfully. The way people in the surfing world were acting was offending me, and I couldn’t relate anymore.

“Surfing is a really egotistical sport. That’s what eventually turned me off of competitive surfing. For some reason, everyone thinks they’re a tough guy just because they can surf well. You have these guys that go out there and battle Mother Nature, paddle out in these crazy storms, and they build this larger-than-life attitude. They never really get humbled in, like, a man-on-man type of way. As apposed to going to jiu-jitsu class and getting choked out five times in one night--your ego is pretty much gone.” 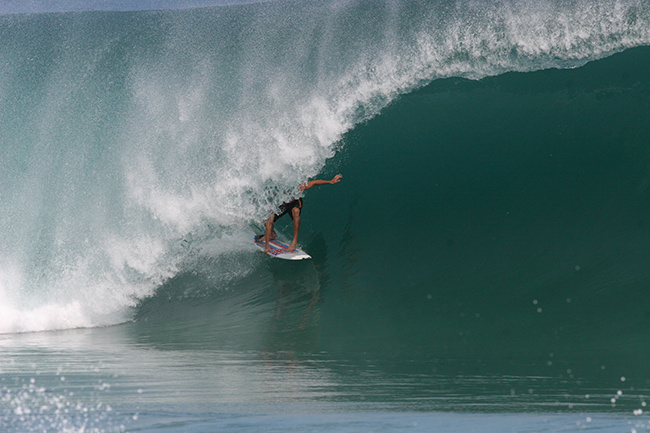 While in pursuit of a pro-MMA career with this new relative absence of ego, Barca found his focus changing again. One day, in the late hours after a training session, Barca was finding it difficult to sleep. He found himself browsing the Internet, and suddenly, after spending his entire life in the lush green valleys of Kauai, he found out for the first time that the notorious Monsanto had been right across the street the entire time.

Genetically modified organisms (GMOs) are controversial. Apart from the health concerns of actually eating them, locals have taken issue with the spraying of pesticides on Monsanto’s seed farms in the open Hawaiian air. Pesticide usage is an important part of raising GMOs. To maintain “clean” seeds, which are then shipped to a lab in Iowa, Monsanto must apply many chemical herbicides, multiple times--sometimes nine days out of 10, all year round. Specifically, people are upset about the use of Atrazine and other “Restricted-Use Pesticides” banned in Europe.

“All together with the Restricted-Use and Regular-Use pesticides, they use close to 200,000 pounds annually just on Kauai. That’s six times more per acre than anywhere else in the country,” Barca tells me. “But on Oahu, on the back roads of Wailua, that’s where Monsanto has their main stuff.”

Right across from the world-famous waves of Bonzai Pipeline is the figurative Death Star of Monsanto’s Galactic Empire. It’s called the Kunia Research Farm, and along with 6,000 other acres of experimental seed fields, it sits just above, and out of view of, the seemingly pristine beaches.

Barca quickly learned everything that he could online and got in touch with community leaders. Since then he’s hosted a number of protests calling for Monsanto’s eviction from Hawaii. Localism is a big theme for islanders, a theme exaggerated by the fact that Barca is a member of Da Hui Surf Club, a group of surfers responsible for enforcing disputes over waves during the North Shore’s busy season.

“It’s hard once you learn what’s going on to not do anything," Barca says. "For me, I can’t sit here and do that. It’s like seeing someone beat up a chick in a parking lot or something. Me, I’m going to go and grab them and tell them, ‘Brah, you can’t do that over here.’ Basically these guys are committing murder on our natural resources. I’m not going to let someone do that to my home. I can’t sit around and let that happen. It’s so personal to me because it’s in my backyard. There’s just no way.

“The largest chemical corporations in history are making our food and farming our land. The same companies that made gas for Hitler are on my island and testing. Google it. It will blow your mind." 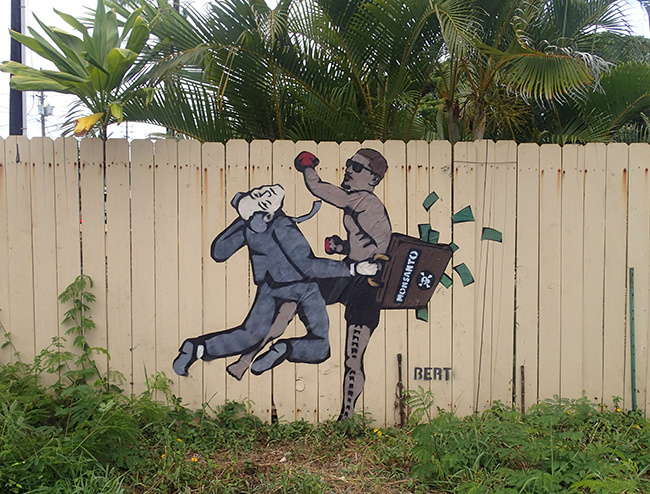 (Art and photo by BERT)

In addition to concerns about the health risks associated with the use of pesticides, the argument in Hawaii is centered around the fact that most of the land used by biotech corporations is leased by the Kamehameha School, a large private school that offers free education to people of Hawaiian ancestry.

The board of trustees at Kamehameha controls what is now a $9.6 billion endowment and over 360,000 acres of land that was given to the Hawaiian people in the will of the last Hawaiian monarch, Princess Bernice Pauahi Bishop. In addition to leasing land to unpopular foreign interests, Kamehameha School is criticized for its investment portfolio, which is filled with Wall Street hedge funds. On its Web site, the school states that Monsanto is a “good tenant: they pay their bills and they keep the land they lease in good condition,” and that they are “not aware of any GMO-related health claims validated by a public health organization.” Of course, Hawaiians were told back in the ‘60s that there was no hard scientific evidence about the negative health effects of DDT or Agent Orange, either, so who can say?

But Barca insists his issue with Monsanto has less to do with science than corporate morality and culturally appropriate use of land. “The cultural preference of Hawaiians is to lease the land to local organic farmers that mimic the sustainable model of the indigenous Hawaiians, the Ahupua’a,” he says. “Currently, less than 100 acres of Kamehameha School land is devoted to organic farming.”

Barca is now leading the charge against GMOs in Hawaii. Through his environmental activism group, Ohana O Kauai, Barca has lobbied for a county ordinance, Bill 2491, calling for increased regulation of agricultural companies on Kauai, including requirements for disclosure of all usage of Restricted-Use Pesticides, limits on open-air spraying, buffer zones for schools and waterways, and environmental impact studies. After declining to vote on the bill twice, the county council will resume discussion this week. 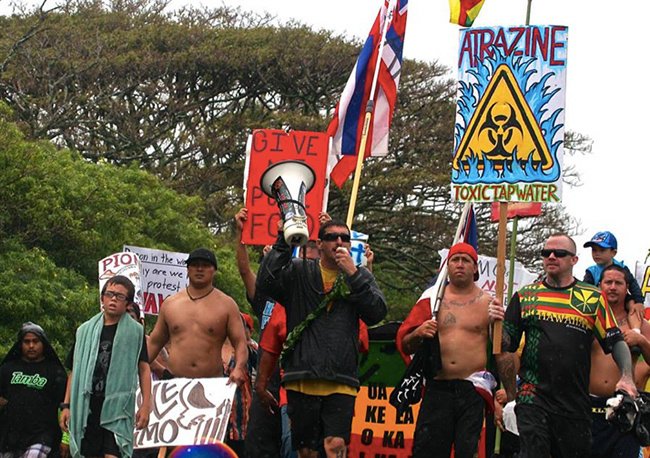 “In the past, people in Hawaii have been taken advantage of by foreigners, so people don’t trust others until they get to know them. That’s the mentality of the people of Hawaii,” Barca says. “The same goes for these biotech companies. How can we trust them if we can't get to know them? These companies are trying to hide what they are doing.

“When the sugar cane barons came to Hawaii there was no information. Nobody knew how bad it was; they only saw money and jobs coming in. Nowadays, people are more open-minded. Now we are way more awake to what’s actually going on. It’s harder for them to get away with the things they have been doing for decades now. Thank god for the Internet, you know?”

Meanwhile, Barca is in talks with mixed martial arts promotion King of the Cage for a possible fight later this year. He plans on spending this winter--big wave season--training, but something tells me that he might be too busy.

“Hopefully I will be putting on a huge awareness concert with some pro-surfers during the Triple Crown around the time of Pipeline Masters,” Barca says. “There has been this astronomic burst of consciousness. It’s crazy how much has happened in the last six months. I’m going to keep fighting.”

UPDATE: So much has happened since we published this story. Barca most definitely kept fighting, and ended up running for mayor of Kauai. Catch up on all of the action and watch the film we made about it here.