A Near Sweep: China's Fighters Shine in Manila 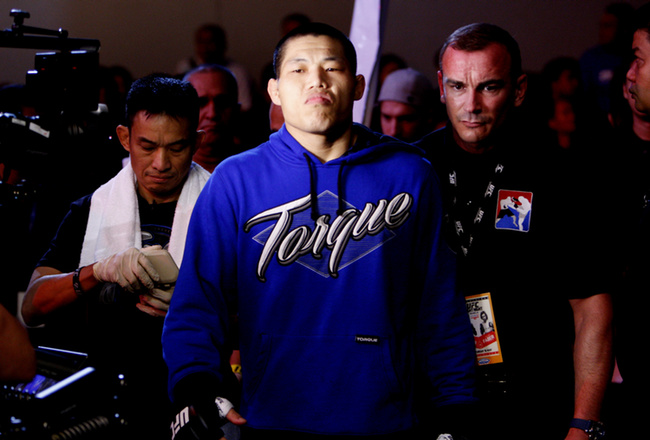 I spent most of Friday night sending messages to the gamblers in my life, exhorting them to throw it all on the Chinese in Manila. “They’re gonna sweep!” I said. The reactions were tepid. Instead, the big spenders in the crew bet the house on the Rockets in Game 7. We were both right, in a way. The Chinese went 3-1 in Manila, with Ning Guangyou and Li Jingliang scoring impressive KOs, Yao Zhikui pulling out a decision in the opener, and Zhang Lipeng coming up short in the wrestle-off thought he might win against Kajan Johnson. Here some decent gifs from the UFC’s Chinese language portal.

Amongst the hundred or so hard core China MMA fighters and coaches, fans and hangers-on, spacetakers and shadows, this Manila card was a big deal. The most prominent Chinese language MMA blog, Wuzhenet, has a story on the Chinese fighters and I think it’s very telling to see what text was highlighted in deep red: Rashad Evans and T.J Dillashaw praising Li Jingliang and talking of him as the most talented and dangerous Chinese fighter out there.

In virtually all things, Chinese care deeply what foreigners think of them. Don’t believe me? Check out this video, Chinese Dreamland, about the rent-a-foreigner industry in China. 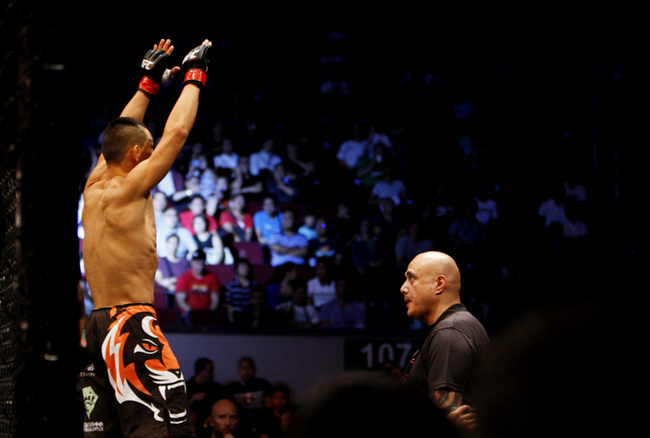 In a related note, Chinese Kung Fu (CKF), a fight promotion featured on national television, put out an essay recently entitled. “Does China need a Manny Pacquiao or a Bruce Lee?”. This is a classic nationalist “think piece” quoting Premier Xi Jinping—“My country has the heart of a lion, it is my honor to [help it] rise up and roar!”—and linking national strength with success in sports. Not a new idea. The essay talks about the impact Jessie Owens and Joe Louis had during the 1930s, taking medals in Berlin and KO’ing Max Schmeling which, the essay writes, “infuriated Hitler!” The CKF breaks down the common lament among supporters of Chinese martial arts:

“Unfortunately, Pacquiao is not Chinese. Therefore, all we can do is use the ‘kung fu is disappearing’ or ‘kung fu’s secret world’ or ‘kung fu is a killing art not a competing art’ narratives to promote and celebrate our martial arts. We can use the old Republican-era masters, here a Sun Lutang, there a Huo Yuanjia. We can talk about our ancestors, tell old stories ... if all else fails we can bring up the Chinese-American Bruce Lee.”

A very interesting paragraph, this one, in which the self-awareness of the kung fu world in Mainland China is on display as well as the old and still quite pervasive view of Bruce Lee as not quite Chinese. And of course the longing for a hero.

China’s feverish obsession with sports heroes and national strength hasn’t quite infiltrated MMA yet. The sport is still too small in China and it’s not an Olympic sport—Chinese are very brand conscious. A gold medal means a lot to the Chinese government/people more than p4p honors in the UFC, for example. The nation’s obsession with gold medals is all over every page of Jeff Ruffolo’s book, “Inside the Beijing Olympics” which tells that tale of the Communist quest for symbols of national strength and all the mundane, fascinating machinations that go with the quest.

Speaking of mundane. Ning Guangyou spent his post-victory time gobbling down stuffed buns—yes, the same buns Po the Panda loves—with all of his people in Beijing. Gathered around a lazy-susan, taking selfies with food in the foreground. Trading humble praise with the other fighters on the scene. It’s a big deal for the community to come away with three wins on the Big Stage, no matter the competition, because MMA in China is just about hope right now. Give the younger cats a path to follow that leads, if not to riches, at least to a bit of glory.

There are no parades or houses or cars or cookie cutter politicos waiting for Ning Guangyou and Li Jingliang at the airport. No one is debating whether or not the fighters represent the nation properly, or whether they’re too individualistic: there was a time when most Mainland Chinese would consider someone like Bruce Lee to be a traitor, but that is changing.

That whole “we need a national hero” and “symbol of national strength” conversation pervading Chinese politics and sports discourse can wait for now. Maybe the next generation of fighters, the young kids ready to compete in a year or so, will get to feel the pressure that comes with competing in the shadow the state. Right now Guangyou and the Leech just wanna eat.