A Sober Look at the Nick Diaz Saga

By Erik Magraken and Michael Martin 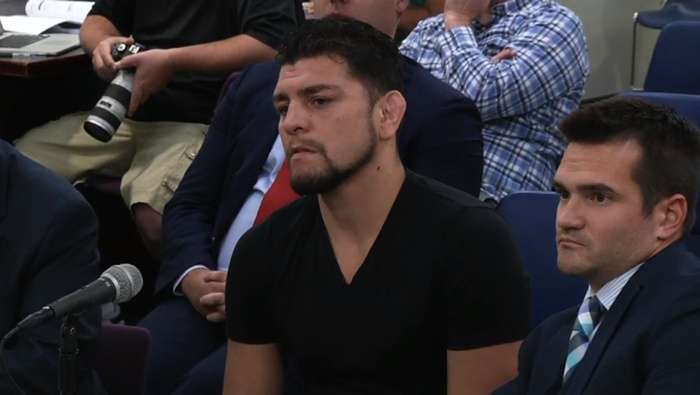 Yesterday the Nevada State Athletic Commission handed out one of their harshest penalties to date, a 5 year suspension, effectively ending the fighting career of Nick Diaz who tested positive for marijuana metabolites following his five round decision loss (since ruled a no contest due to Silva’s use of PED’s) at UFC 183. Immediately thereafter, a firestorm of criticism came roaring forth on Twitter as MMA journalists and fighters alike denounced the decision. A few examples-

The lazy headline would be that Diaz was banned for 5 years for marijuana but that would only be a half-truth. While a positive marijuana test was the catalyst for the legal proceedings, the harsh penalty was based on the fact that this was Diaz’s third such infraction in the State. This, coupled with Diaz pleading the Fifth Amendment for every question posed to him other than his name (even for benign matters such as whether he actually competed in UFC 183) clearly brought on the ire of the commission.

NSAC hearings are often criticized as a kangaroo court and this proceeding left much to be desired. From commissioners laughing when Diaz’s lawyers raised sensible objections to apparent double standards in how they treated Diaz’s witnesses compared to Nevada’s there is little shortage of perceived unfairness. Things became heated when Diaz’s lawyer reminded the panel that he had due process rights and was entitled to these and one can fairly ask whether these exchanges influenced the commission’s draconian sentence.

It is clear this hearing is likely headed to judicial review before Nevada’s Courts, especially given the fact that Diaz’s lawyers voiced their intention to apply for such a judicial review within minutes of the conclusion of the hearings. While Diaz may be able to point to certain procedural shortcomings his unfortunate reality is that the foundation of the NSAC’s decision should withstand scrutiny.

Diaz failed to mention any marijuana use in his pre-bout questionnaire. This is an admission he could have made without consequence as marijuana is not banned out of competition. No defence was offered for this failure and this alone can trigger consequences. Whatever procedural flaws an appellate body finds with the NSAC's hearing this blemish for Diaz will remain and he will be punished.

The NSAC will likely learn a valuable lesson from judicial review as well. While they were condescending to Diaz for failing to learn his lesson from past failures the same accusation can be leveled at them. The Nevada judiciary recently slapped down the NSAC's lifetime ban on Wanderlei Silva finding it was "arbitrary and capricious".

Earlier this year the NSAC adopted sentencing guidelines to create consistency and predictability for doping offenders.  A third violation for marijuana is not the egregious penalty which calls for a lifetime ban as Nevada acknowledges with their guidelines setting out the following in black and white:

The NSAC failed to give any reasons why they deviated from this recently adopted guideline. They were clearly irked with Diaz's assertion of his 5th Amendment rights and appeared further irritated with his legal representative insisting the commission honor Diaz's rights to procedural fairness. Being butt-hurt, however, is no legal ground for harsher punishment, and the Nevada judiciary may just remind the NSAC of this truth.

At the end of the day combat sports stakeholders should take a sober look at the reality of marijuana prohibition in combat sports. The in-competition cannabis ban only exists for protection of the fighter consuming the drug. Whatever your thoughts are on recreational marijuana use the reality is that no athlete should fight while impaired. That said, the testing of metabolites which can reveal marijuana use as remote as several weeks prior to testing seems to be an ineffective way to address this safety concern. Perhaps it would be better to rely on the integrity of a pre-bout medical exam to verify an athlete is not intoxicated, instead of the flawed marijuana metabolite screening system presently in use.

In any event, there are lessons to be learned from all involved here and hopefully the sport can progress to better deal with the benign threat that recreational marijuana use poses in combat sports.

Erik Magraken is an oft-cited authority on combat sports law. You can find his blog at http://combatsportslaw.com/.