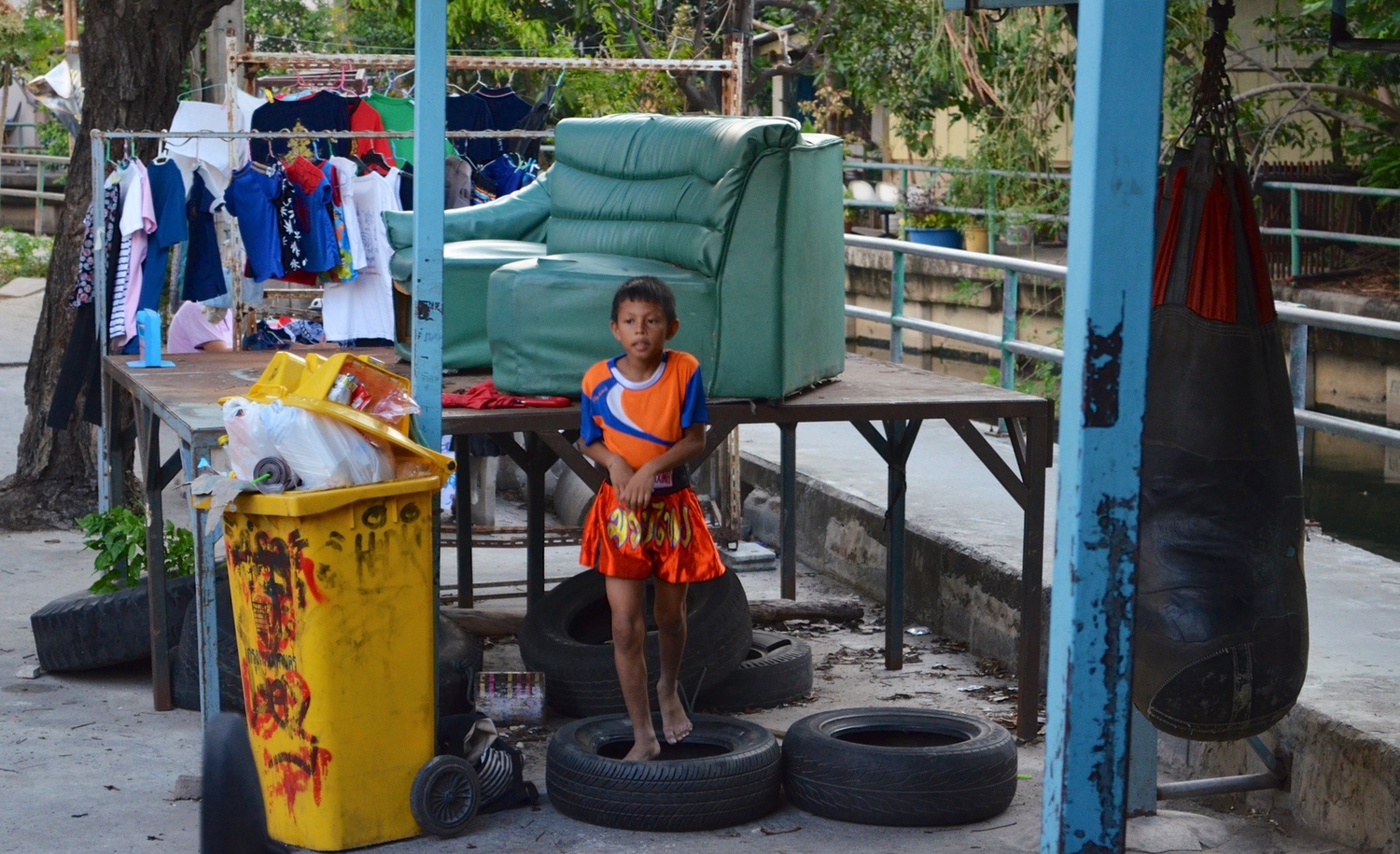 Each afternoon around 4pm, a dozen Thai kids and teenagers leave school and walk along car-clogged streets and narrow canal sidewalks in Phra Khanong, Bangkok, to a gym with a crooked ring. If the trainers are late, the kids know what to do. They wrap, shadow box, hit the bag, lift rusty weights with questionable form. They practice technique together, talk about upcoming fights, and laugh as they move around the ring with the weird corners. 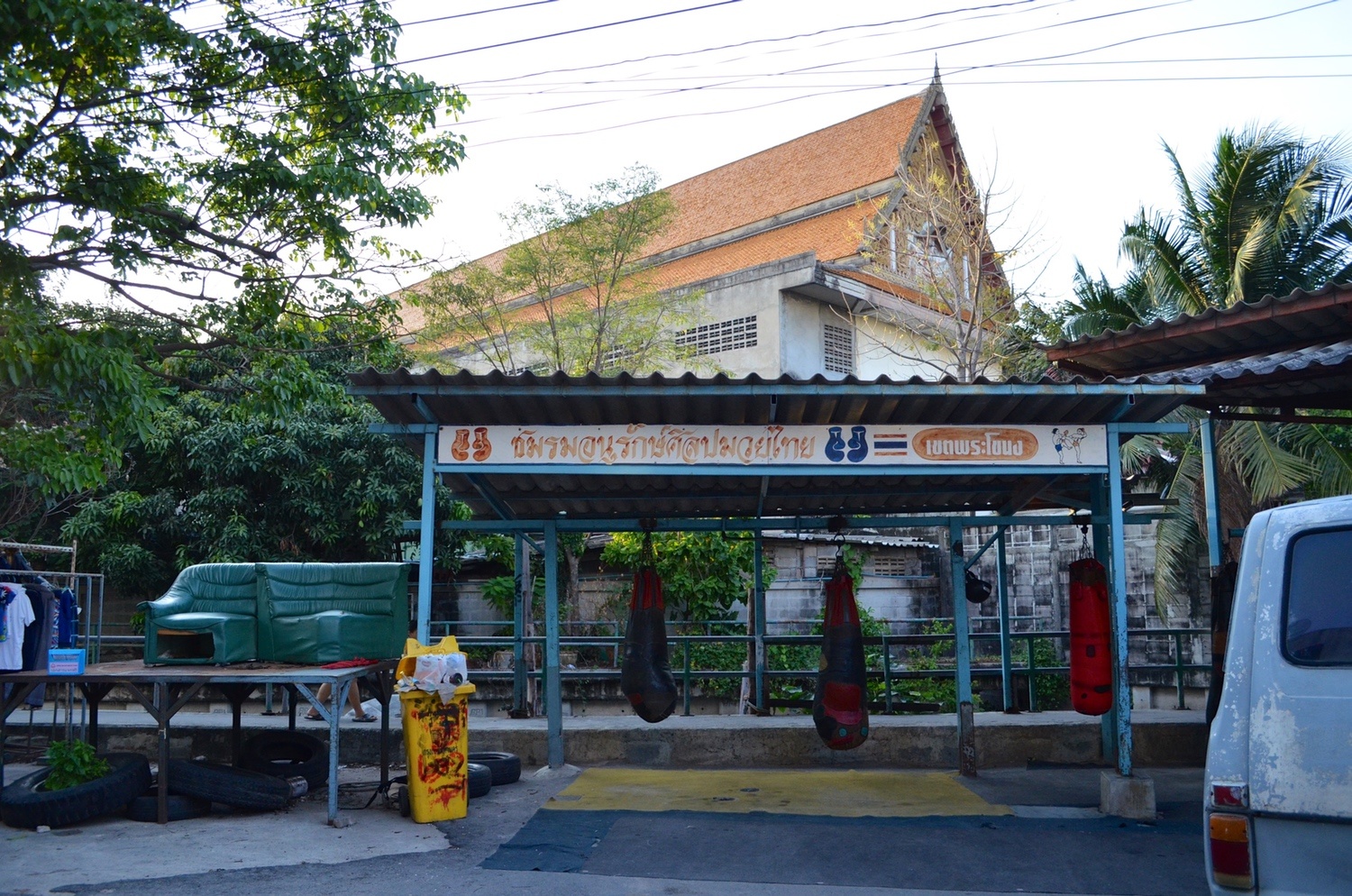 Training at Bor Breechaa ends by 8pm and the young fighters walk home. It's dark now, but the residential neighborhood is safe despite its appearances, and the kids don't have far to go. Most live in the massive housing blocks that dominate the streets, buildings so large they look like giant honeycombs or rabbit warrens rising out of the flat landscape. 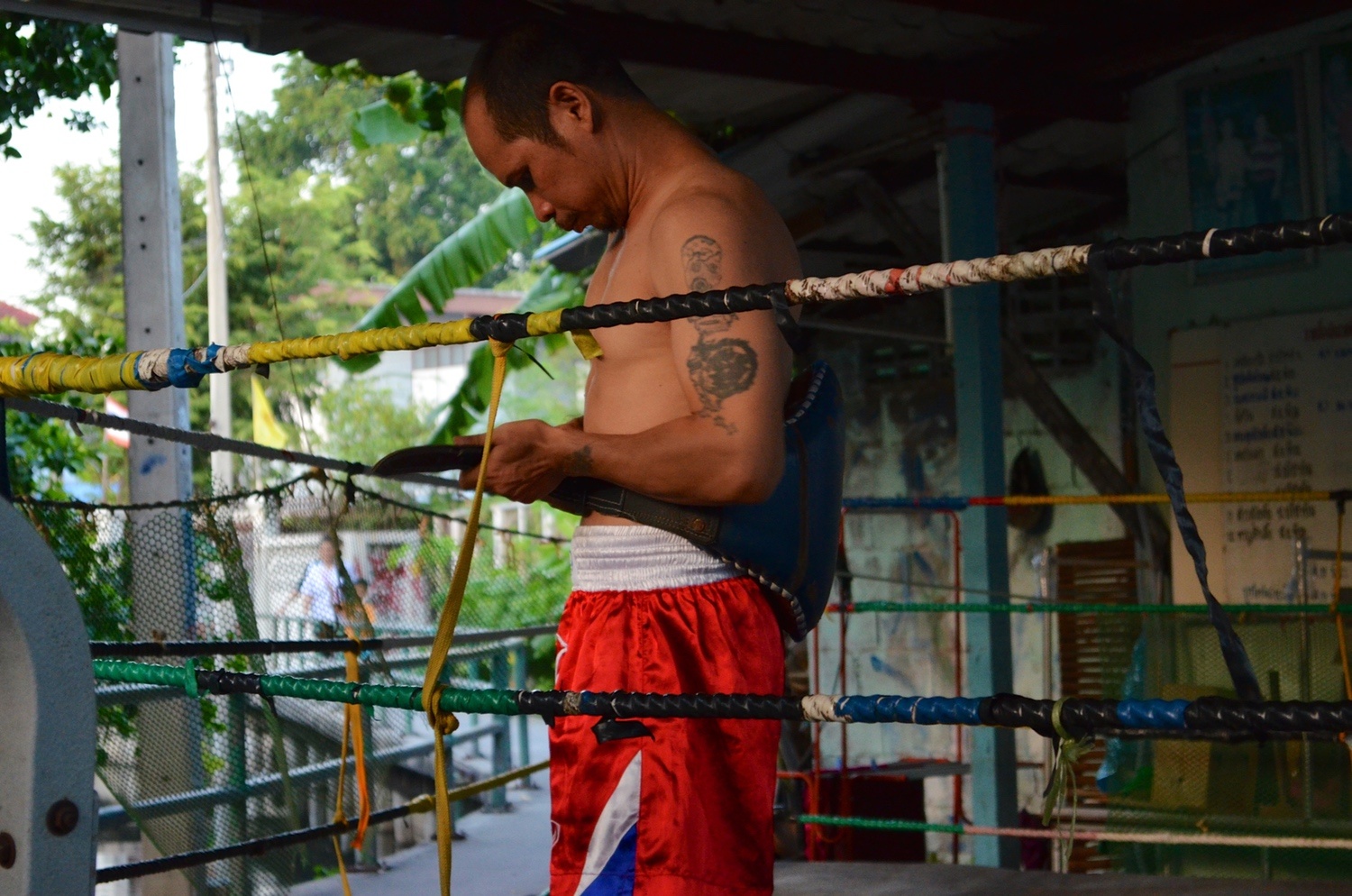 Gym owner Gai returns to his modest room in the warren too. His fighters are children of his neighbors, local kids who found the gym by word of mouth or by walking past on the way to school. Everyone in the area knows who he is and what he does. His tiny gym has been a community staple for 10 years. It gives the local kids something to do after school. It gives them a way to make money, to build a career.

Gai isn't around Bor Breechaa as much as he used to be. Lately he's been spending more time at his new gym across town. 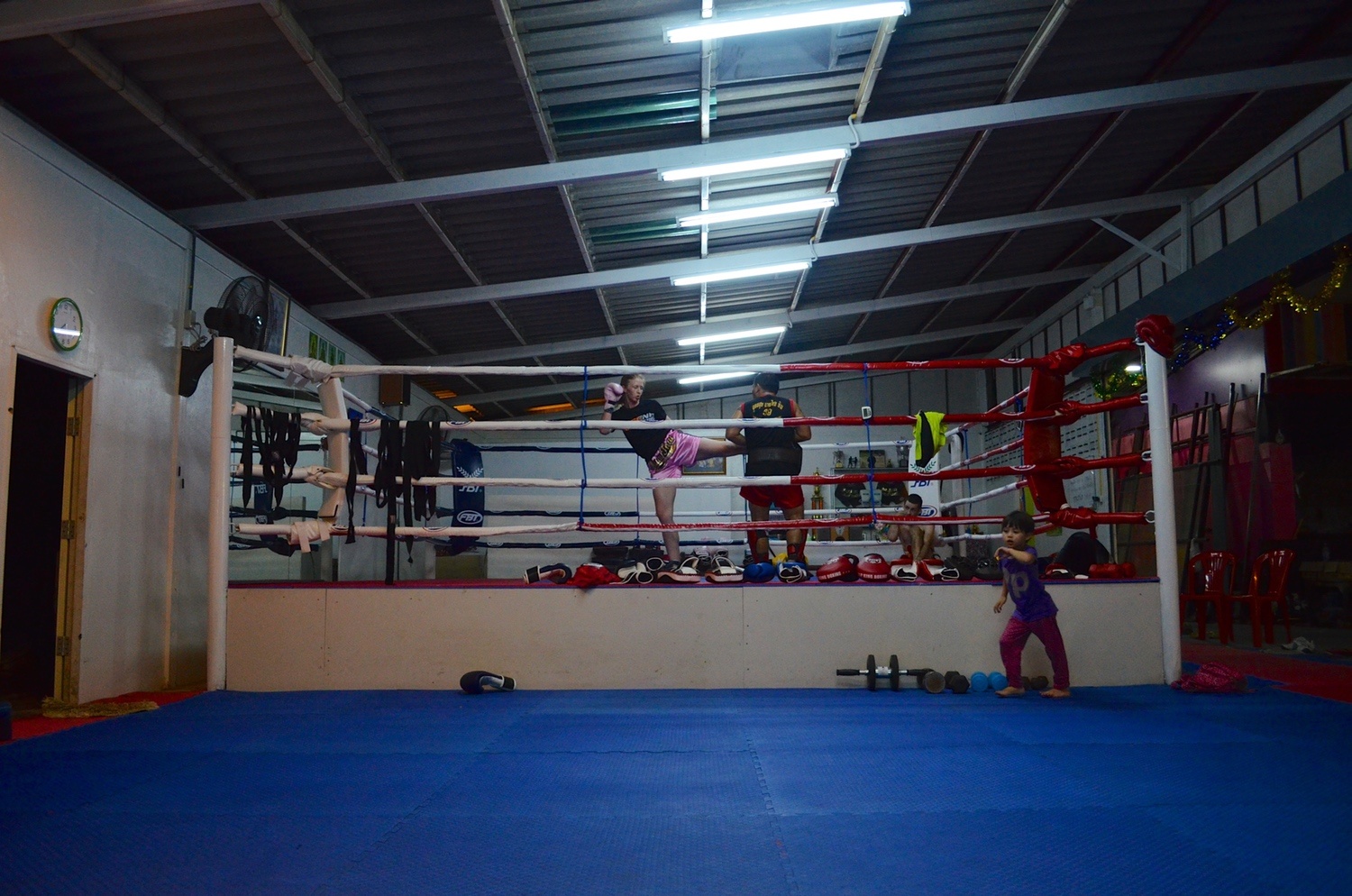 Udomsuk looks nothing like its battered sister-gym. It sits neatly in the back of a small shopping center, not smashed between a makeshift parking lot and a polluted canal at the end of a poor residential street. The floor is padded at Udomsuk, sweeter to the feet than the dusty threadbare rugs thrown over concrete at Bor Breechaa. Udomsuk is painted nicely, Udomsuk has real walls, Udomsuk has a standard ring with 90-degree angles. And Udomsuk isn't populated by kid fighters from the neighborhood.

Instead, it's Thai businesspeople and university students who pour nightly into Udomsuk. They safely stash their gym bags in the corner and begin training at a leisurely pace. Most arrive after work—6pm is when the gym really starts picking up. Trainers are paid to hang around beginning at 10am, waiting for anyone interested in Muay Thai to show up and pay for a session. 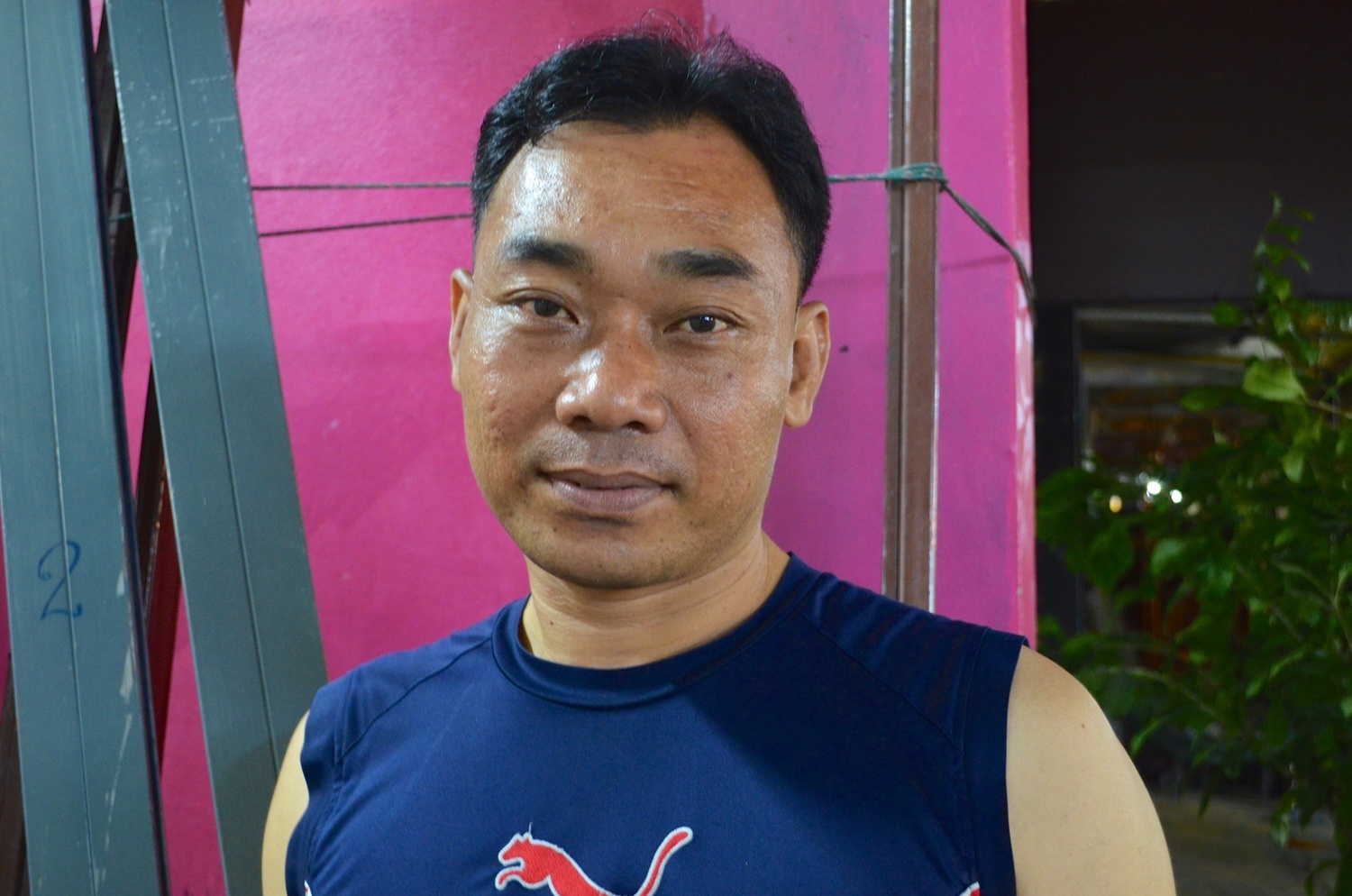 Gym owner Gai oversees both operations. "I opened Udomsuk to teach the art of Muay Thai," Gai said, putting emphasis on "art." Differentiating between "fighters" at Bor Breechaa and "students" at Udomsuk, Gai describes Bor Breechaa's training as aggressive, difficult—all that's necessary for future and current stadium fighters. Udomsuk, on the other hand, "is about technique and power, not about damaging someone else." The main difference, Gai says, is the mentality.

Gai started Muay Thai at 16, relatively late for most Thai fighters. Originally from Mukdahan Province in Isaan, the teenage Gai moved to Rayong and then on to Bangkok, where he fought for the legendary (and infamous) Sor Thanikul gym. He's become a forward thinker in Thailand's modern Muay Thai culture with the opening of his two gyms: one a classic neighborhood gym that raises poor kids into stadium fighters, and the other a recreational/educational gym, part of a new generation of training facilities aimed at Thailand's growing population of Muay Thai hobbyists. 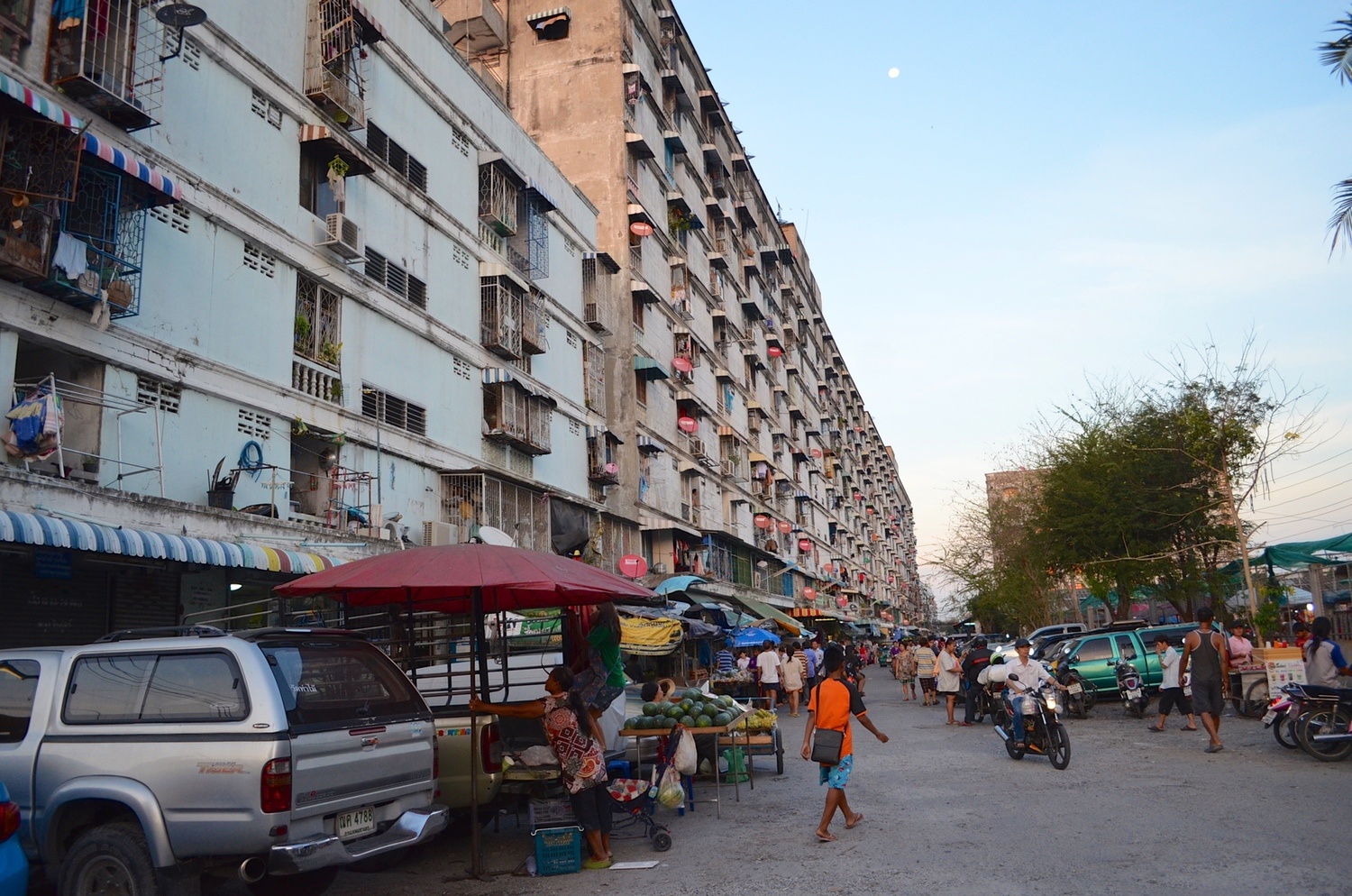 It's a Muay Thai business model that has worked well outside Thailand. Once seen as an activity only for poor kids from the Thai countryside, Thai boxing gyms have sprung up in posh neighborhoods in Western countries and are now slowly seeping into middle- and upper-class Thai culture. The first gym in Gai's modest Muay Thai empire is traditional, but his second is clearly part of the new wave.

Udomsuk is embracing modern marketing as well. The gym's Facebook page, with photos of Thai and foreign students posing cutely, makes the place look accessible and friendly. If any viewers worry about watered-down Muay Thai, though, their fears should be exorcised by the occasional video of the large Western and Thai men ferociously kicking pads. 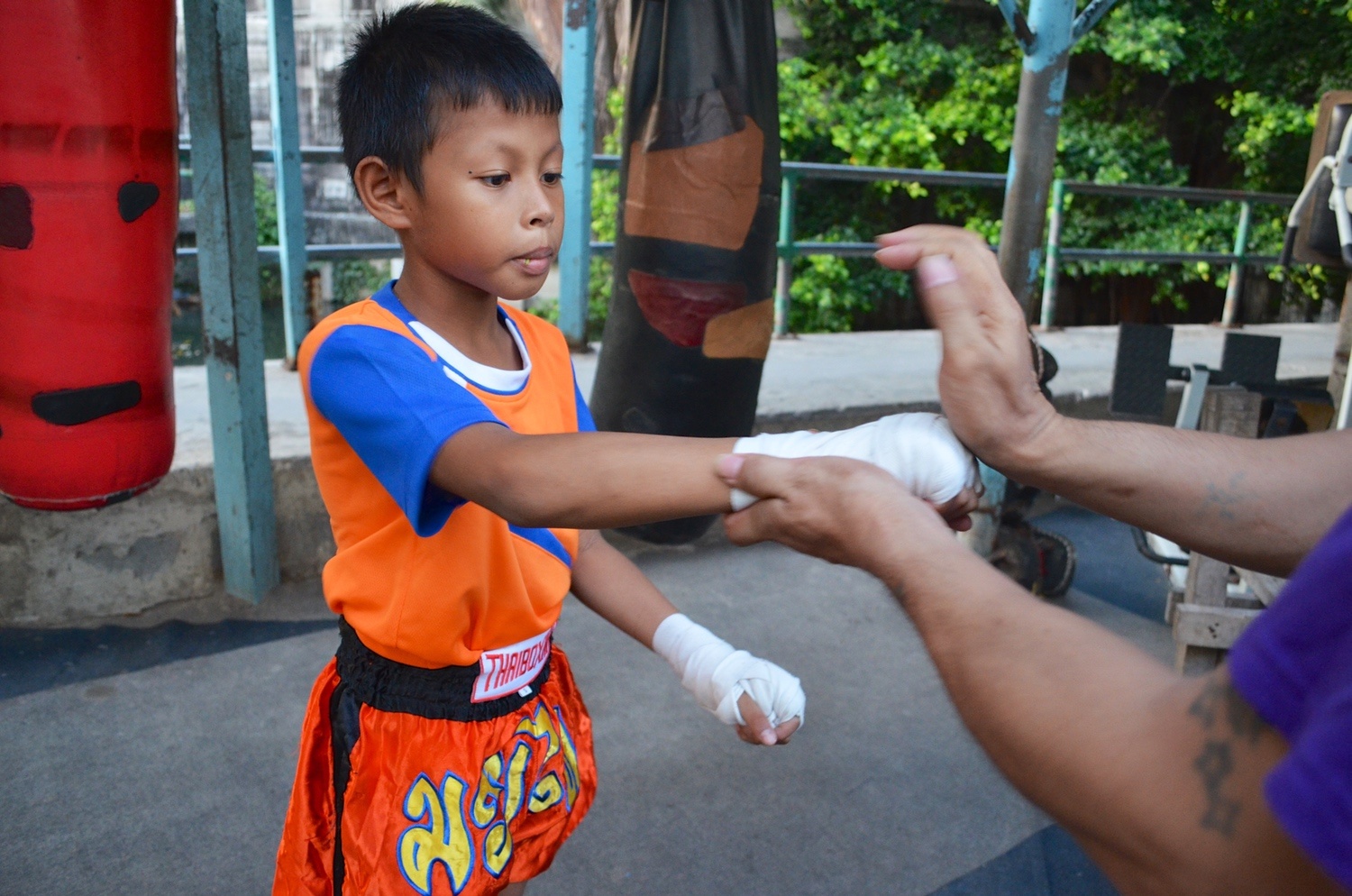 Profitability of the two gyms varies tremendously. Students at Udomsuk pay per session, whereas Bor Breechaa's Thai fighters train for free. Traditionally, professional fight-oriented Thai gyms do not charge their fighters for training, and simply take a cut of the fight purses. Fighters are an investment, and an expensive one at that. It takes a lot of time, money, and effort to raise a kid into a successful stadium fighter, and many fighters don't make enough in purses to offset the gym's investment. Gym owners who are not independently wealthy often must keep their day job to fund their fighter-raising pursuits. Gai, with two gyms to his name, still works in the glass installation business.

Gai's young pros are welcome to train at either gym, though his hobbyist students are kept at Udomsuk. Gai says they're mostly businesspeople in their thirties, attracted to Muay Thai for fitness or self-defense, for the martial art's technical beauty, or for the pure fun of training. Some end up taking the odd fight if the right opponent can be found, but most of his students want to achieve the level of a fighter without actually fighting, he says. 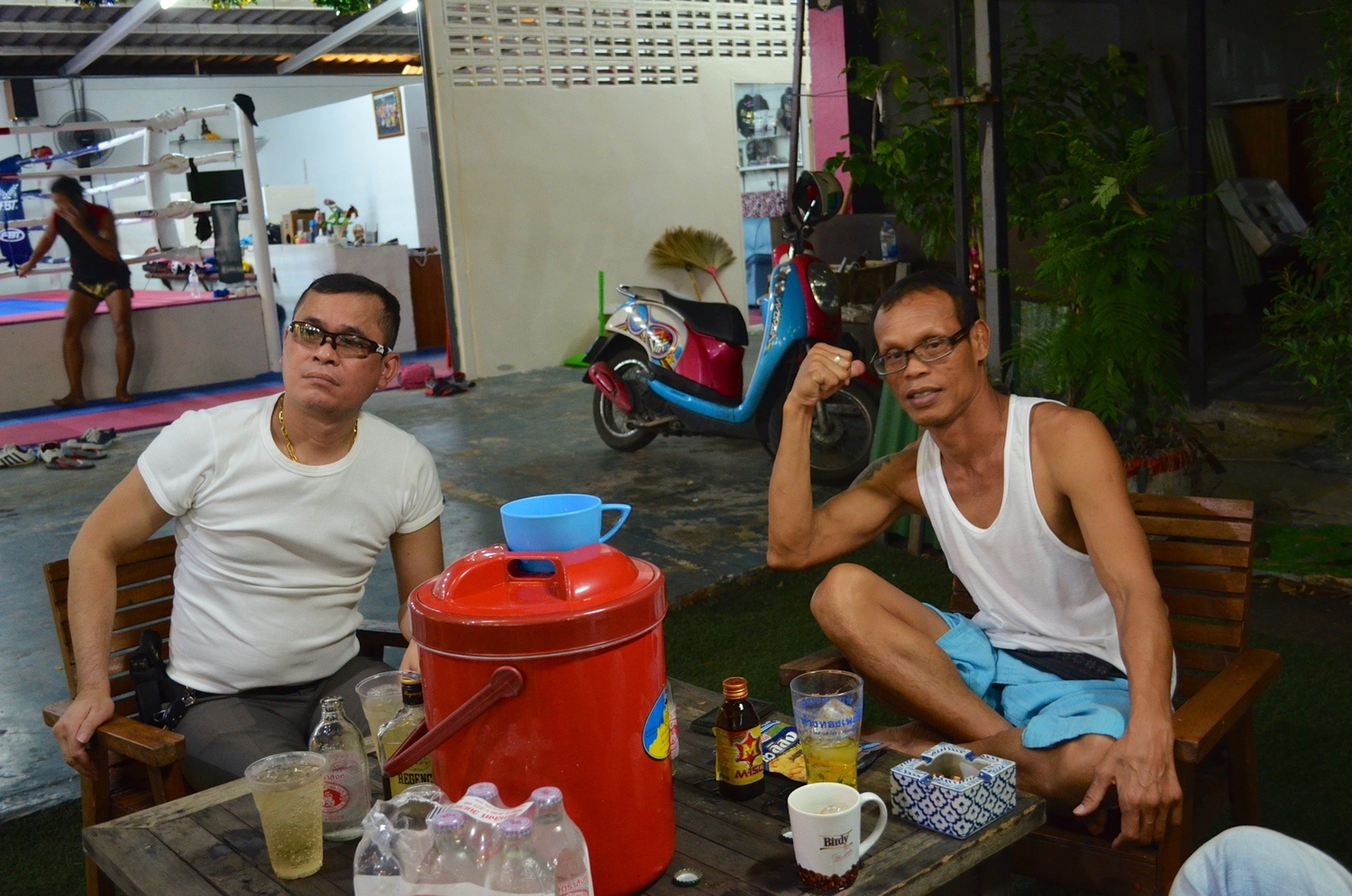 Gai's Muay Thai operations also provide employment in the community. All his trainers, each one a former fighter himself, are old friends from the neighborhood. They relax after training around the wooden tables, drinking beer and soda water, waxing nostalgic about past Muay Thai eras and showing each other pictures of themselves winning fights at Lumpinee and Rajadamnern 20-plus years ago.

Udomsuk is marketed as a friendly place where former fighters can pass the art of authentic Muay Thai on to their fellow Thai citizens who didn't have the (mis?)fortune of growing up as fighters. Gai says he truly wants to spread Muay Thai to non-fighters. He says he does this because he loves Muay Thai.

He also loves money. It's no secret the glass contractor and gym owner from Isaan is hoping to make a profit off Udomsuk. He does acknowledge, however, that much of his Udomsuk earnings are funneled into Bor Breechaa. It was a large reason he built another gym in the first place—to offer Muay Thai to enthusiastic hobbyists, yes of course, but also to use their money to fund his kid fighters. 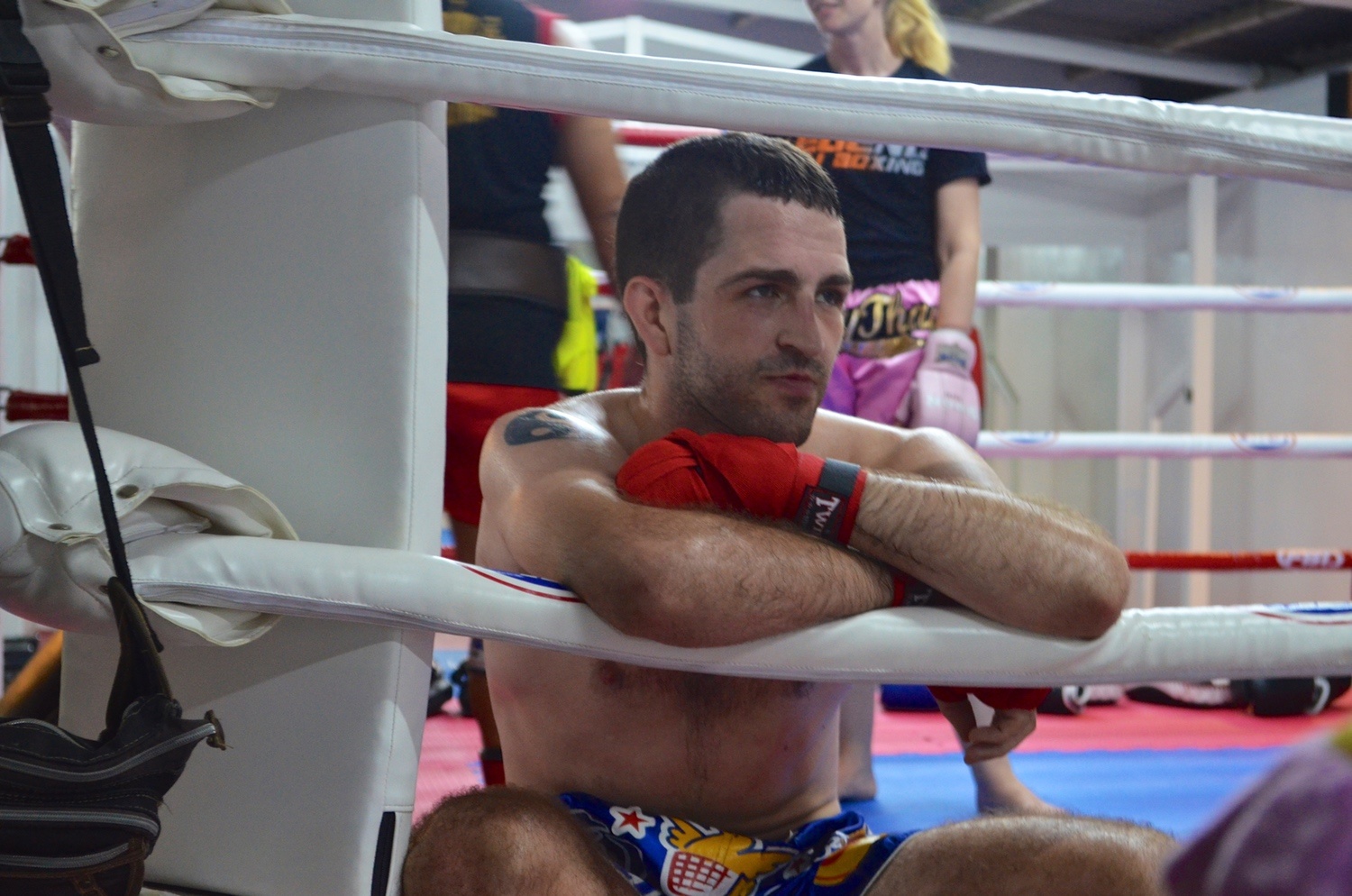 Thai customers pay 350 baht (about US $10), with extra discounts available for high school and university students. Foreigners are a different price, though. "Four hundred baht a session," Gai told me. "Foreigners have to pay more because they're bigger and it's harder on the pad holders."

Like a fat-tax? I think I've heard of this before.

At first the price disparity seemed like convenient money-making scheme, discriminatory against humans often seen in Thai society as both larger and richer. But one should not underestimate the hard life of holding pads and clinching for a living—I've often heard my close Thai trainer friends complain of chronic back and shoulder pain sustained from working with foreign "big boys," as they call them. 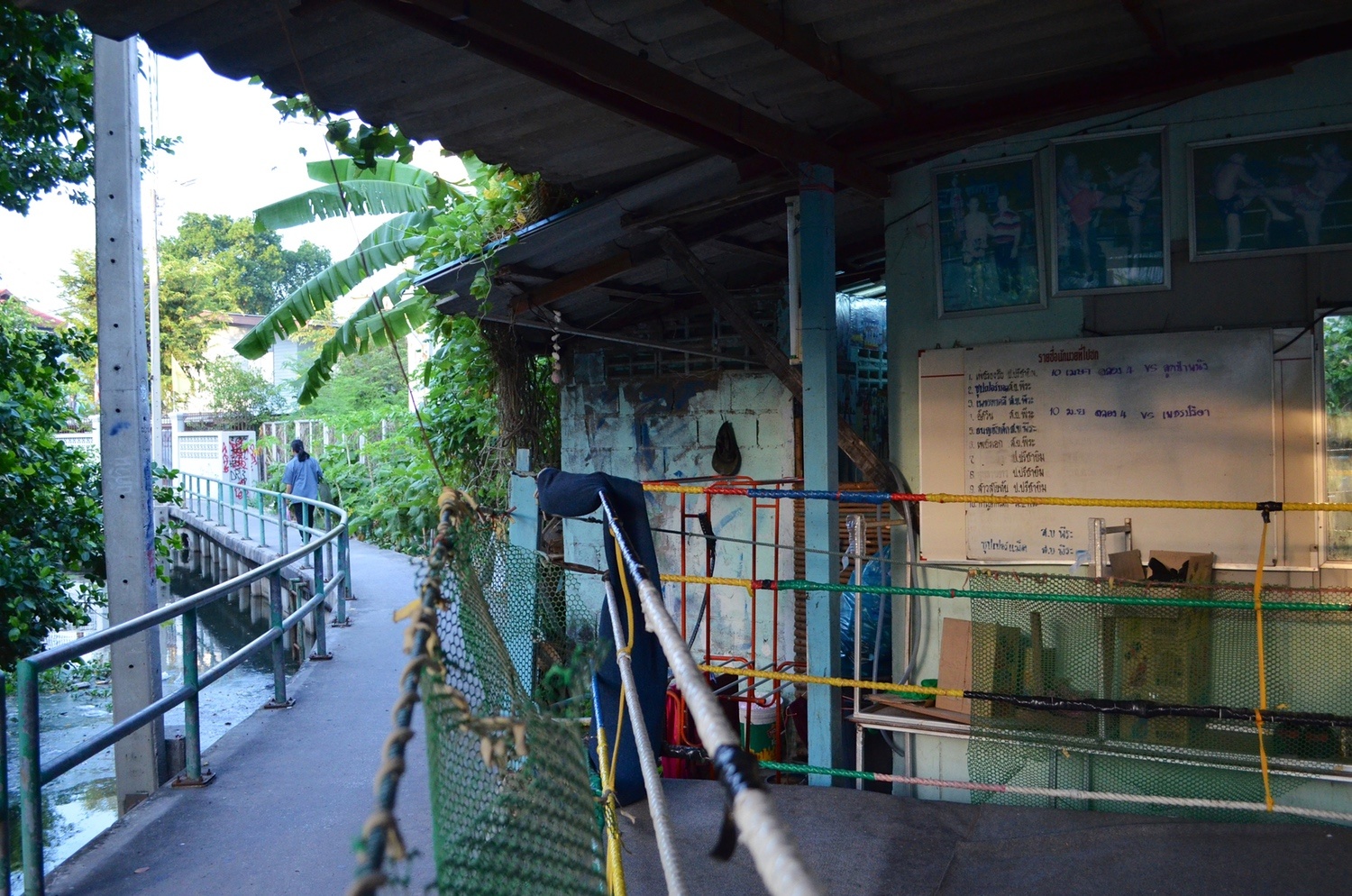 Having to pay an extra 50 baht (about US $1.50) per session is not the most flagrant example of Muay Thai highway robbery I've witnessed. Plus, everyone likes to support a good cause, right? Foreigners subject to the big-people-tax can look at it as supporting the local kids at Bor Breechaa.

Udomsuk is doing decent business. Not enough to make Gai wealthy, but enough to keep Udomsuk's sister-gym going in its ramshackle state. But even if he were drowning in money, Gai says he has no plans to move Bor Breechaa from its residential dead-end location. The little gym will stay where it is, complete with threadbare rugs and a ring with funky angles. If the fighters are winning their fights despite the gym's rust and quirks, why change it? The money would be better spent on hiring more trainers or giving raises to his existing ones.

Muay Thai isn't a surefire route to wealth, but Gai is doing alright for himself. He's 45 now, making his Isaan family proud by owning not one but two gyms in Bangkok, still making an honest living as a glass-man. He works three jobs: glass, Bor Breechaa, Udomsuk. More when you count all the promotion and match-making and marketing that goes on in the shadows of Muay Thai business. The guy's a hustler, and it shows: "I'm not scared of being rich," he said. "I'm scared of being poor."