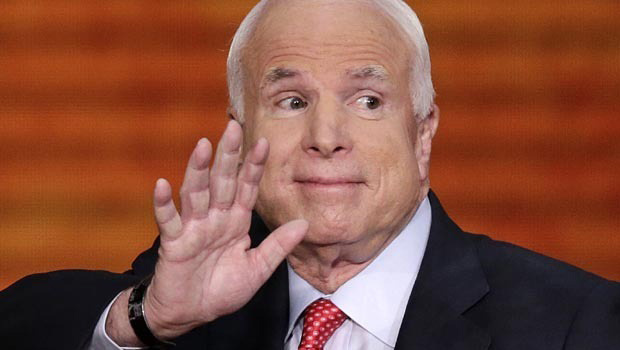 The world started turning upside-down sometime last year, when the new pope, Francis, came out against unfettered capitalism and admitted that neither he nor anyone else is in a position to judge homosexuals. There I was, after 37 years on the planet, suddenly realizing that I agreed with the pope about things. I barely knew how to handle the situation. It reminded me of hearing Pat Buchanan back in 2002 come out against going to war with Iraq. “If George W. Bush has committed one sin in his presidency, “ I thought at the time, “surely it’s forcing me to agree with Pat Buchanan about something.”

But I imagine it would be pretty difficult to find someone with whom you disagree about literally everything, so I should really stop being surprised when Arizona Senator John McCain’s views and my own dovetail. Sure, McCain was the guy running against my beloved Barack Obama back in 2008, and yes he’s a dyed-in-the-wool hawk who pushed for the surge in Iraq and for bombs over Iran, and sure, he voted against making Martin Luther King Day a federal holiday, and yes, he committed the unforgiveable sin of pulling Sarah Palin onto the national stage--but John McCain has his good moments, too, as we MMA lovers all saw last month when the  longtime MMA antagonist not only joined forces with the UFC to promote a new brain-trauma study but also admitted that if MMA had been around when he was boxing at the Naval Academy, he would have given it a try. At the time, McCain’s announcement was a pure shock to me, but now that it’s sunk in, and I remember the John McCain from 2000—the maverick with the bipartisan spirit, who seemed to vanish in 2008—I’m no longer stunned when McCain comes out and says something delightful. I just marvel at the Venn Diagram that is human ideological variety.

Which is all a roundabout way of applauding McCain for coming out against Arizona’s SB 1062, a bill supporters say will enhance religious liberty in the state but which would actually institutionalize anti-gay bigotry in a state that’s already institutionalized bigotry against undocumented aliens. McCain tweeted earlier today that he hopes Arizona Gov. Jan Brewer vetoes the bill when it comes to her desk, joining his fellow Arizonan in the U.S. Senate, Jeff Flake, who sent out an essentially identical tweet on Saturday.

So, three cheers for John McCain—MMA fan and foe of the new-school Jim Crow.