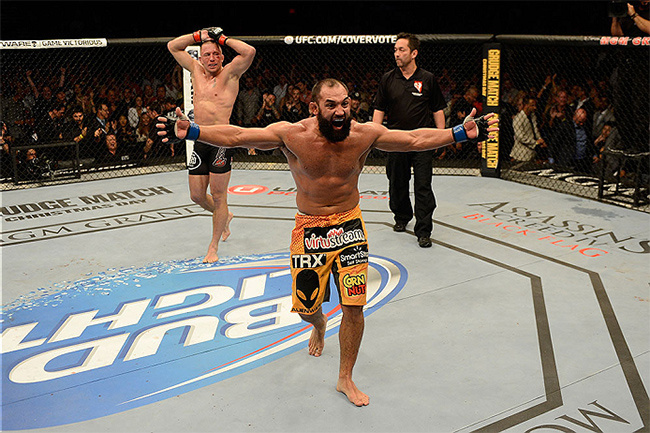 The UFC’s platinum anniversary has come and gone, and for all the UFC’s rightful belief that its best days are yet to come, that the future belongs to it, UFC 167 will be remembered for how thoroughly it was mired in the past, which is to say mired in timelessness, which is really to say the eternal recurrence (once again) of combat sports’ greatest and more unshakable problem: How, oh how, do you judge a fist fight?

As soon as welterweight champion Georges St-Pierre (bloodied and battered) was announced the winner of his fight Saturday night against Johny Hendricks (fresh as a daisy) the backlash and the controversy and the online indignation began. Which is fine and right and for the best.

Because say what you will about the glory of sport and the communal immersion of millions in single moments, when it comes down to it, the joy of any true fan doesn’t come while watching a sporting event; it comes afterwards, when we’re free of the tyranny of other people’s actions, of the passivity of observation, and able to have our say. When the game is done, we cease to be mindless watchers and become critics, self-appointed authorities who have to yield time to no one. It’s only in the minutes and hours and days after a game or a fight that we get to make something universal and outside ourselves our own. Other sports have entire offseasons in which fans are kings of philosophy, but MMA fans have to move quick and settle for a few days, or a week at best.

We as humans are plagued by an inability to exist entirely in single moments. If we weren’t we wouldn’t be spending hundreds of millions of dollars a year learning how to be mindful—unrolling our yoga mats, splaying out on analysts’ couches, sitting through guided meditations, jumping on flights to visit ashrams in India. Thankfully our innate inability to truly exist is the gilded now, which is our great plague as a species—the price we pay for an active mind and consciousness of our mortality—is offset by our greatest inheritance: critical thought, which, though woefully short on peace and calm, does set us apart from all the other animals walking the earth and gives us something to do on Monday mornings.

Believe whatever you want about the St-Pierre/Hendricks fight, but it’s impossible to make the argument (though many have) that it’s beyond the realm of possibility that GSP won. Though it makes perfect sense that the best way to judge who won a fight is to see which guy beat up which guy more, the reality of the 10-point must system is that judges are required to score fights round by round. This may be a maddening holdover from boxing that is irrelevant to MMA and that strips judges of the authority to make reasonable decisions based on the entire narrative of a fight, but the rules are the rules. And while I can’t reasonably say that Johny Hendricks didn’t beat up GSP (look at the champ’s face then look at the challenger's; then again, look at GSP’s face after fighting Carlos Condit, a fight no one would ever say he lost) Hendricks supporters can’t reasonably say that the three rounds the judges gave the champion couldn’t have gone his way. Not that sports fans, or Internet interpreters, are ever expected to be reasonable.

Indignation is one of the secret delights of being a sports fan, but even we have to live by the rules handed down to us by the gods. Or the Nevada State Athletic Commission.

Our love for Chael Sonnen has been broadcast from the highest treetops for all the world to see. There is nothing he could do at this point to make us love him less and nothing he could do to diminish his significance in the history of MMA. He is the sport’s first true deep personality and its greatest free thinker. He introduced beauty to self-promotion and turned selling fights into performance art. He both embodies MMA and transcends it.

That said, as a fighter Sonnen is a tortured soul. When he’s up, he either stays up or falls prey to sudden submissions, but when he’s down he doesn’t really ever get up. For a guy so full of life and passion and ability, Sonnen is plagued by something that doesn’t allow him to recover. He’s a frontrunner. As soon as Rashad Evans took him down in the first round of their fight on Saturday, Sonnen was all but done. Just like that. All that fire that seemed to propel him into dominating wins over guys like Brian Stann and “Shogun” Rua, and dominating almost-wins over guys like Anderson Silva, seemed to be snuffed out in a moment. When Evans took his back, Sonnen’s only defense was to kick his legs helplessly and then tap. I’m no psychologist, but there is a self-destructive mechanism somewhere in the brilliant mind of Chael Sonnen, an instrument of insidious self-doubt, much like there was in Scott Fitzgerald and John Coltrane. This is what you might call the Curse of the Artist.

Watch What You Say

Brag too much and you tempt the fates, and sometimes the fates come to crush you in the form of the man standing next to you with a microphone in his hand.

During this weekend's post-fight press conference, Johny Hendricks, the Man Who Would be Champion, was a ball of self-righteousness and blaring confidence. And why not? The man the judges said he’d just lost to was in a hospital somewhere, and Hendrick’s boss, UFC President Dana White, had just told the world he thought the judges had gotten it wrong and that Hendricks should be the champion. Hendricks came out and the first thing he said was that he considered himself the true champion, and no one on the dais disagreed with him. Though he didn’t have the belt, Hendricks had the second best thing: the indignation of the unjustly and unfairly done-by. It’s a lovely position for humans to find themselves in. Sometimes luxuriating in an illegitimate loss is better than soaking in a win.

Then Hendricks went too far and flew too close to the sun.

Feeling his oats, the Texan told a reporter that he really hadn’t hit GSP that hard. “The reason why,” Hendricks said, “I really wasn’t trying to knock him out. … I was putting about 70% on him. And it was enough. Seventy percent of my power was enough.”

And like that, the gods, always on the lookout for anything resembling hubris, decided to strike down Johnny Hendricks.

It was a painfully awkward moment, especially considering the landscaped nature of your usual post-event sports press conference. But that’s the great thing about MMA and the world the UFC has created: The sport and the promotion leave themselves open to those kinds of human, unvarnished, messy moments. The kinds of moments where fans feel like they’re watching people and not commodities--when they feel like they can identify most with the men and women they revere. Twenty years in and MMA still feels like an outlaw sport with the power of unpredictability on its side.

On the 20th Anniversary of the UFC, We Give Thanks for the Lack of Brian Kilmeade