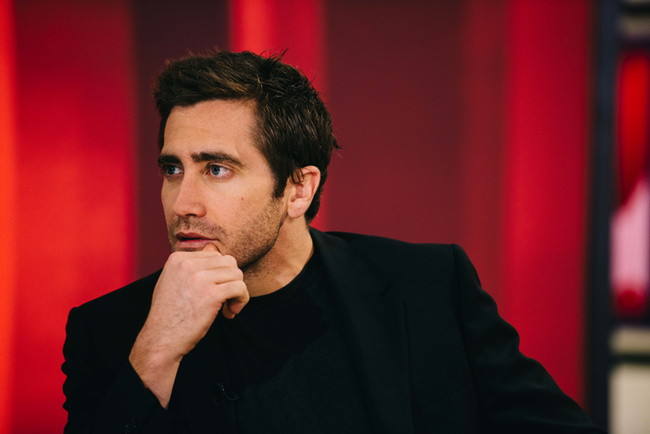 Former Hollywood heartthrob Mickey Rourke isn’t the only actor to reveal a completely transformed body in the name of boxing this week. Deadline debuted a brand new image of Jake Gyllenhaal in his forthcoming boxing picture, Southpaw, yesterday and the current Hollywood heartthrob looks ripped, to put it lightly. The actor has previously been snapped idly shadow boxing in public in preparation for the role, but this is the first official shot from the film to hit the internet.

Gyllenhaal put on fifteen pounds for Southpaw—a far cry from the 25 he dropped for his most recent offering, Nightcrawler—in which he plays Billy “The Great” Hope, a champion left-handed boxer who loses everything due to a personal tragedy and must fight to redeem himself in and out of the ring.

In an interview with Deadline, Southpaw director (and longtime recreational boxer) Antoine Fuqua detailed how much work his star put into getting his body and his head in the right shape for the movie.

“I asked this guy from day one, ‘I need you in the gym every day. I need you to train every day.’ And I said, ‘The word is sacrifice,’” Fuqua told the site. “Literally. I think he broke up with his girlfriend because he was just in the gym every day. He was training like a fighter. I had him sparring, really getting hit. I put him in situations where I wanted to see what he was made of. No one but fighters understand the sacrifice it takes to be a fighter.”

He went on to rave about the results of that dedication.

“Jake is going to change how people see him. I had him training twice a day in the boxing ring, he did two-a-days seven days a week. I pretty much had him with me and my trainer every day. I took him to almost every fight. I had him train at Floyd Mayweather’s gym in Vegas and we watched Floyd’s fights, and the Manny Pacquiao fight. He trained in New York at Church Gym with real fighters. We literally turned him into a beast.”

Fuqua also revealed that Gyllenhaal had no stunt double, and that Jake’s co-star, Welterweight boxing champ-turned-actor Victor Ortiz (who reportedly plays someone named Ramone in the film) pegged him a few times while they were training.

It’s a potentially happy ending for a movie that was, for a number of years, almost as embattled as its main character. Southpaw was originally picked up by the Dreamworks studio in late 2010, with Eminem set to play Billy. In fact, screenwriter (and Sons of Anarchy creator) Kurt Sutter wrote the role specifically for the rapper and recent Rousey badonkadonk-denouncer.

“I know he’s very selective and doesn’t do a lot. But he shared so much of his personal struggle in this raw and very honest album, one that I connected with on a lot of levels,” Sutter told Deadline at the time. “He is very interested in the boxing genre, and it seemed like an apt metaphor, because his own life has been a brawl. In a way, this is a continuation of the 8 Mile story, but rather than a literal biography, we are doing a metaphorical narrative of the second chapter of his life. He’ll play a world champion boxer who really hits a hard bottom, and has to fight to win back his life for his young daughter. At its core, this is a retelling of his struggles over the last five years of his life, using the boxing analogy. I love that the title refers to Marshall being a lefty, which is to boxing what a white rapper is to hip hop; dangerous, unwanted and completely unorthodox. It’s a much harder road for a southpaw than a right handed boxer.”

In August of 2011, shortly after Fuqua came on board, Dreamworks dropped the film. MGM picked it up the following October (and later dropped it), but Eminem put the project on hold to focus on his music in May, 2012. In late 2013, Eminem quit for good and The Weinstein Company, the film’s new studio, started courting Gyllenhaal. Finally, in March, 2014, Deadline announced that Southpaw was a go with Fuqua at the helm and Jake officially in the lead. Co-stars Rachel McAdams, Forest Whitaker, Victor Ortiz, and Tyrese Gibson were announced soon after. Oscar-winner Lupita Nyong’o was rumored to be part of the project at one point, but her potential role ended up going to the criminally underrated Naomie Harris. Singer Rita Ora also signed on for a small but pivotal role that producer Harvey Weinstein is quite excited about.

At long last, Southpaw began filming in Fuqua’s hometown of Pittsburgh this past summer. At one point, The Weinstein Company were hoping to release the movie as early as this December, but no official release date has been announced yet.