Alex Karalexis and the Art of the Weight Cut 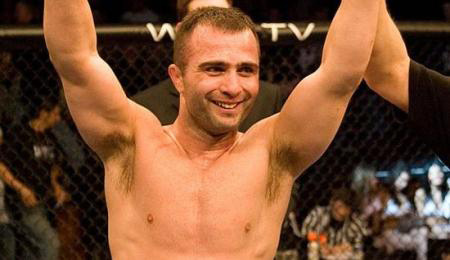 To MMA fans, the amount of weight their favorite fighter drops before he or she steps on the scale is usually a rumor or an afterthought. But for the fighter, that number is all too specific and arrives slowly, one bead of sweat at a time. Alex Karalexis, a veteran of the inaugural season of The Ultimate Fighter, fought under the Zuffa banner in three divisions—the last of which, lightweight, was five pounds lower than his high school wrestling weight. To make the weight inscribed on his contract, he typically shed dozens upon dozens of pounds. Now retired from fighting, Karalexis opens up about the pre-fight routine that’s as hard as it is inevitable.

Alex Karalexis: How do you gain almost 30 pounds just from fluid and baby food? Scientifically, I have no idea. It makes absolutely no sense. All I can tell you is I did it 12 times.

I’ve never walked into a cage or been in a fight and not been the stronger guy—I’ve never locked up with somebody and been like, “Oh shit,” you know? Some guys can jump high, some guys can run fast. Genetically, I’m strong. I used to bench 405 and never touched anything other than protein and stuff like that. So for me, cutting weight was more about the reach advantage.

I was 216 when I got the call for the Jason Von Flue fight (at UFC Fight Night 3 in 2006). I did 46 pounds in 31 days. I took that fight because it was my job. If I was a carpenter and someone asked me to build a deck, I wouldn't say no because it was cold or snowing, you know?

I hear it all the time: “If you’re gonna fight at 155, you should stay around 175, don’t get above 180.” What people don’t realize is when I was fighting at 155, I was 184 pounds when I got in the cage. You take a week off or two weeks off, whether you’re injured or you want to take a vacation after going through a three-month training camp, before you know it, you’re over 200 pounds just from drinking a couple beers, eating a steak, and not training six hours a day.

The Von Flue fight was bad. Before my fight with Ed Ratcliff (at WEC 31 in 2007), I cut 57 pounds in five and a half weeks. That was the worst. I still get anxiety—if I’m around a sauna when I’m on vacation or something, I get the shakes. All my sleepless nights during my fighting career never once came from an opponent. It came from knowing what I was gonna go through the Wednesday, Thursday, and Friday leading up to the weigh in.

Early on while cutting calories I would eat a scoop of protein and half can of tuna a day. Toward the end of my career, it was great—I’d wake up every morning and I’d see an e-mail from my nutritionist with an Excel spreadsheet of what I could eat that day. But back then, we were fucking cavemen.

While you’re cutting, you try to sleep in. The first thing you do is just go for a run, get your road work in, usually for about an hour. It wasn’t anything about distance—I wasn’t trying to break my mile record. That’s called weight control—just wake up, get your body going for an hour. Do your regular workouts, like your pad work and your wrestling, your strength and conditioning—that’s where you get in shape. Then at night you go do your sparring, or whatever you didn't do in the morning, then you go for another jog at night or hit the jump rope.

When it was time to cut water, you get in the sauna in your pair of shorts. Then every two minutes, you add a piece of clothing until you’ve got your sauna suit plus three layers—sometimes it’d be two layers on bottom and three or four layers on top. You get out and walk an hour on the treadmill on number three, which doesn’t seem difficult. But I can guarantee you there’s only a small percentage of people on this earth that can make it through the 20 minutes after, when you sit in the sauna. At 15 minutes, you hit a wall. At 25 minutes, that’s when doubt starts creeping in.

That’s when you need guys like Mark Giove, like Eric Runci, like Phil Baroni, like Joe Stevenson—those were pretty much my four guys that were around me cutting weight. After that, you’re just on cruise control. They just take turns convincing you that you can do it because, honestly, you don’t feel like you can. No matter how many times you go through it, it’s always the same. When you’re cutting weight like that, you’ve gotta have people around you. I’ve seen the toughest SOBs, world champions, break down and cry. It’s not a normal thing, but it happens and it’s part of the gig.

Then it’s usually back in the sauna for 15-minute bouts. Sometimes you don’t need to do any. When I did 11 pounds for the Josh Smith fight, I did 15 minutes in the sauna, an hour on the treadmill, and I was on weight. I felt fucking fantastic. Then there were other times I’d be 14 pounds over and I’d have to do five or six bouts in the sauna after the treadmill. There’s no rhyme or reason.

Phil Baroni’s a great training partner, and he’s an even better friend. Some guys will cut weight with you, but they’ll sit in the sauna with a bathing suit on, get out every 10 minutes, get some water, and check back in. Phil would throw plastics on and sit in the sauna with you. I mean, he wouldn’t cut the weight in the weeks leading up to it, but the day of the weigh-in, Phil was cutting like 15 fuckin’ pounds with you.

In between bouts in the sauna, you’d step out for five or 10 minutes. Or fall face first on a towel and have your friends drag you back in. Either one.

I’ve tried everything as far as staying positive—trying to take the weight off mentally. Then you’re a pound heavier than what you thought you were, and it kills you. Then you say, “Okay, I’ll low-ball it. I hope I’m 160.” You say that, but mentally you think you’re at least 156. Then when you step on the scale and you are 160, it devastates you because you low-balled it.

We’d usually start the cut at 11 in the morning. At 3 o’clock, I had to report to the weigh in. I didn’t care about the pounds—I knew at 3 o’clock, it was over. At 4 o’clock, I might have to go back for another hour, but from three to four, I was done. When I would step out of my hotel room to walk down to the weigh in, I was 100 percent. You can’t show weakness. You don’t let people carry you. You don’t let your opponent see you wounded, you know? You put on your smiley face and act like you wanna be there.

Every time I stepped on the scale, Burt Watson—god, I love that man—he’d have the towel ready. I knew I was on weight buck-naked. I wasn’t stepping on, stepping off and taking my shorts off, and getting back on. Guys do that when they’re half a pound off and they hold out hope. I didn’t have the energy to do that.

Once I got off the scale, it was right up to the room to rehydrate—Pedialyte, water, Gatorade mixed with water. No interviews, nothing.

I’ve eaten in Paris, I’ve eaten in Rome. Let me tell you something: It’s pretty sad when you’re a 33-year-old man and you think Gerber’s pineapple-strawberry is the best thing you’ve ever had in your life. That’s no bullshit either. But that’s all I could eat without getting sick. It takes your body just as long to accept food again as it does to cut it out. After putting your body through that, at no point do you feel great. It takes weeks, man. That shit will fucking suck the life out of you. It will beat you down. After two or three hours, I could get up on my feet.

All the shit that I went through, I never missed weight. I never even had to take an extra hour.