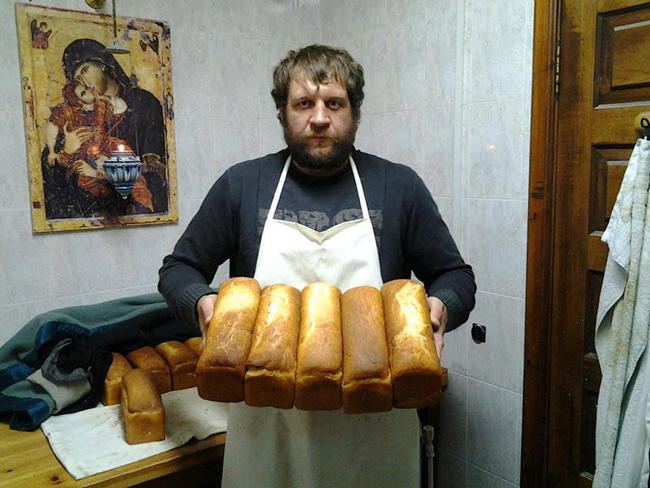 Fightland: Everyone, even your brother Fedor, say that you had more potential than he did. Has Fedor's success put pressure on you?
Alexander Emelianenko: No, I wrestle him down easily with my arms. Everyone stands out in his own way. I am also not remaining in the shadow. He was just lucky here and there. I can’t say anything bad about my brother because Fedor helped me a lot; he brought me into MMA. When I was a small kid, Fedor carried me on his back through the whole town of Stary Oskol, where we lived, from the kindergarten back home and then to the gym. At first, I just watched from the bench at the gym then they gave me a small kimono and I have started to wrestle. I am very thankful to him.

What happened to your contract with [MMA promoters] M-1 Global? I started to work for the pocket of [Vadim] Finkelstein. When I first met him, he was driving a cheap BMW and telling me so many beautiful stories. But when he started working with me and Fedor, he purchased a hectare of land, a Bentley, and lots of other cars. Then I just understood that I could fight without his help and earn more money because I know MMA from inside out. I don't work with Finkelstein because he is Finkelstein.

You said in one of your interviews a year or two ago that you were going to fight for 10 more years. Have you changed your mind?
Of course not. What else can I do? I get different offers to take part in this or that business, but as long as I have enough energy, I will carry on fighting. I can't say that I have done enough in MMA. I will keep on fighting until everyone in Russia starts doing sports. By the way, heavyweight fighters start feeling the strength at the age of 30 and I had lots of interesting fights but I can’t say I had my last one.

I am trying to develop the sport. Trying to make the youth go to the gym. Trying to show them what you can do instead of watching shit on TV. I am building a gym in St. Petersburg where everyone will be able to train for free. We should train Russian fighters and make them the best.

But just before you went to the monastery you said you were going to finish your career?
That was a joke. Many people don't get jokes. Anyways, I was joking for Russian fighters but everyone started to cry that fights would be dead without Alexander: “MMA without Alexander is not MMA.”

What was this monastery story all about?
It was a pilgrimage. I am a religious man. I believe in God and I have shown everyone, every Christian that you should go to church at least once a week. I was there for three months. I visited different monasteries, saw relics. I learned much more about religion than I have known before. And, of course, I am planning on going back because I am asked to come back every day. Half of my phone contacts are monks, priests. It wasn’t a PR action like those swines, journalists, reported. They write one thing and then the following day I have to deny everything. 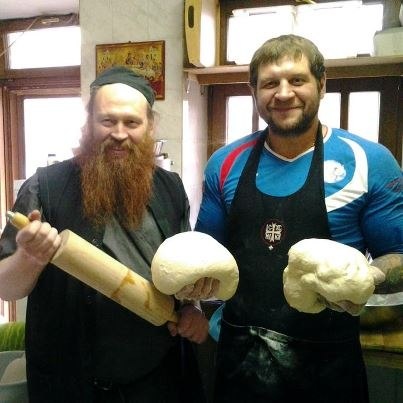 What do you think about Fedor's showing his religiosity during his fights?
I have no idea. You should ask him. He was the one coming out, kissing the cross, taking it off, and giving it to his coach. But he went to the monastery that I went to only once.

Is there a reason why you don’t want to go to the U.S. and fight in UFC?
I am not interested in fighting in the U.S. Randy Couture was a very interesting fighter. He was great but he has been crushed when he wanted to leave UFC and fight Fedor just when he was at the peak of his popularity. Dana White sued him in the U.S. and won. Couture had to return to UFC and was banned from fighting elsewhere. His popularity dropped then he lost a couple of fights and he dropped in price. Eventually, he left the sport.

What do you think about women’s MMA?
Oh! I don’t respect it at all! There are women and men’s type of sport. Would you fancy dating a girl with broken ears or nose? There are feminine types of sport like rhythmic gymnastics or figure skating that develop and make women look beautiful. Imagine you have a wife who does weightlifting. She is going to pick you up and carry away.

There are the Emelianenko brothers and just across the border in Ukraine there are the Klitschko brothers. What do you think about them?
Klitschko brothers have astonished me in a bad way. The younger one lives with a small boy in Germany and I wonder how much money has the elder one received from the Rothschild family. No less than $100 million so he could compete with the president of Ukraine, Viktor Yanukovych, and try to become the president himself. They have already taken everything in the heavyweight category. They should carry on doing what they know and not trade themselves as some dishonorable girls do.

What do your parents think about your fighting?
At first our mother didn’t watch the fights. But when she did, she would always curse at Fedor: “Why have you kicked Alexander so badly?” She was crying all the time but I always told her that everything was fine. We are old enough to choose what we want to do. We asked our mother not to interfere and carried on fighting. Our mother submitted to our wish later on but now she is telling me, after every fight, to quit, and I am asking her, “What am I going to do then? Do nothing?”

Would you be able to do something else?
No. When the kids at the school I went to were asked who you wanted to be when you grow up, everyone was saying either an astronaut or a policeman. And only I said I wanted to be a fighter.

There are lots of rumors about your tattoos. Do they have criminal connotations? You have stars that areusually the sign of being a thief with the Russian mafia.
Tattoos is my hobby. I don't have stars … I have them only on my knees but, you know, in summer when Iwear shorts it is like riding a bicycle when you have the light falling down so you can be spotted from far. My neighbor, a real hooligan, asked me if I wanted to get a tattoo and I said, “Why not?!” Now I have tattoos all over my body. That is his job. I usually choose tattoos that I like and I can do it anywhere I am. The recent one was done by the best tattoo master in Moscow. It is called the “Prayer of Jesus.” 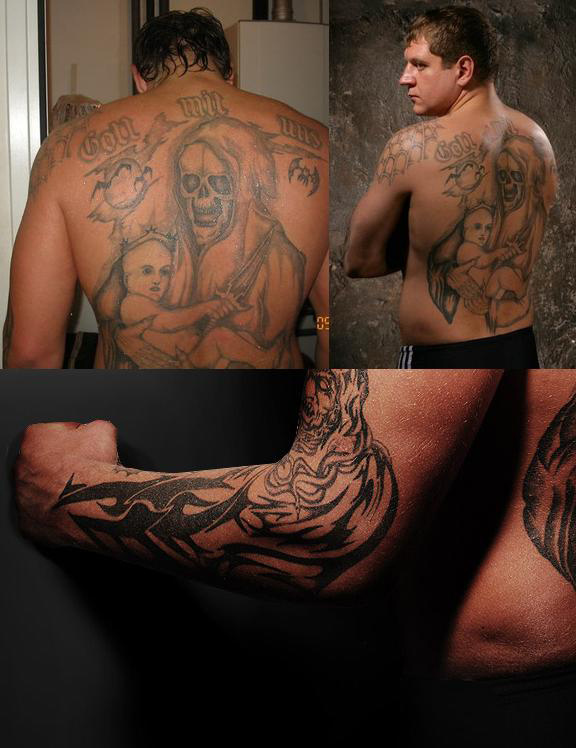 Your once and future opponent Jeff Monson also has lots of tattoos.
He has incomprehensible tattoos.

What is life like in Stary Oskol?
Visit it yourself and ask my mother. I didn't have any childhood there. My friends were drinking beers with girls, smoking, while I was passing them by with my wet kimono. They were saying to me, "Alex, what do you need this for? Come and party with us." And I have been looking at them and thinking, "Bastards." Then you come to the gym, put on the wet kimono--it stinks, you feel sick from the gym. But now those friends are either jealous, doing drugs, or dead. Everyone achieves what they want.

Have you achieved what you wanted?
No, I am only starting. If Fedor and myself leave the sport, there will be no one to go out and fight. MMA will die and Finkelstein will have to go back to Israel.

What Russian fighters will dominate MMA in the near future?
Me.

James "The Colossus" Thompson Takes on the Banks, the Bookies, and Alistair Overeem