Alexander Gustafsson Prefers to Do His Interviews Alone 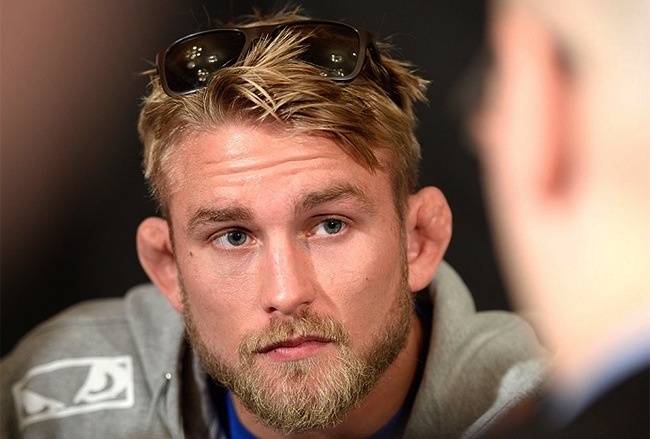 Alex Gustafsson is not happy. Bad Boy baseball cap pushed back, shoulders slumped forward, he does what he can to get comfortable on the type of plastic chair they make you sit on in school. One of the few pieces of information he’ll volunteer about himself during our interview--which he calls to a halt twice--is that he wasn’t suited to the classroom. He isn’t suited to doing press in the fishbowl studio of a basement London gym, either.

The main problem is that Gustafsson’s soon-to-be-opponent, Jimi Manuwa, is too close. He’s actually on the other side of the room, with two camera crews, reporters, photographers, and UFC event staff between them, but for Gustafsson that’s still too close. The beam-like legs of his 6’5” frame cut the distance even more when they’re kicked out in front of him.

Gustafsson sits upright and nods as I take my seat. When he shakes my hand his palm feels one-and-a-half times bigger than mine. Despite being physically imposing he doesn’t look me in the eye once, which seems strange until I realise that’s he’s not looking into the mid-distance but staring across the room. He adjusts his head every time someone in the clump of bodies moves so he can keep Jimi Manuwa in his sights.

Fightland: How much time do you spend at your gym at your mother’s B&B in Sweden?
Alexander Gustafsson:As much as I can. I like to be in the countryside, with family and friends. When I’m not training I’m out there. I grew up in the countryside and small town. I wasn’t raised in Stockholm. I moved there later on.

What don’t you like about cities?
It’s not the right way to live for me. I’m only living in Stockholm know because I’m doing what I do. When it’s time for me to do something else I guarantee you I'll move to the countryside.

Did you rebel against living in a small town when you were young?
Yeah, but now I’m older I just want to get back there. I like the countryside because it’s no-stress, but I like to have people around me. I like nature. It makes me calm.

Your first experience of martial arts was boxing when you were a kid. Were your friends into it as well?
They did boxing so I did boxing. I hung out with friends and thought it was cool. We weren’t tough kids; we were normal kids with a lot of energy. I wasn’t directly a good school kid, so I did sport. I liked the challenge and being part of that group, but I wasn’t training every day. I didn’t take it seriously. I just did it for fun and liked competing a little bit. I started doing sport seriously when I got into MMA.

How did you spend your time away from school and the gym?
I helped out my parents out with work in the countryside. My dad is a carpenter and I helped him out with that. I've got four sisters I grew up with and a grandmother I was close to, too.

Did the practical skills you learned from your dad make you self-sufficient?
Well, no, because I was really bad at carpentry [smiles]. But he helped me a lot, absolutely. I knew carpentry wasn’t for me and that I wanted to do something else.

Was there another line of work you ever seriously considered?
No.

Did you have a back-up plan?
He shrugs.

How easy did MMA come to you? Was it a lot of days of getting your ass kicked? How much punishment –
Is it possible to have different interviews in different rooms?

Gustafsson doesn’t want to be in a room with Manuwa anymore. The other options are a tiny reception area upstairs; the main room of a gym, where they’re blaring out pop music; and the men’s changing rooms. We are politely asked by UFC staff to stay put.

I know a heavyweight Swedish kickboxer who was approached about training with you. One of the things they told him about was –
How much of a beating I can take? [smiles]

Yes. Were you surprised by your endurance?
Not really. I tried to learn as much as I could. Taking a beating was the way I learned. The hard way.

What’s the Swedish attitude toward celebrity?
They’re very supportive but Swedish fans are a little more ... careful. They have a lot of knowledge. Of course, they’re loud in the arena but they don’t like running up to you in the street. It happens sometimes but what happens more is that you can see that they know you but they let you be.

Do you prefer that?
Either way works for me.

He’s known for using taekwondo techniques to strike a ball. What do you think of his kicks?
[Smiles] I think he’s awesome.

Tell us more about your family life…
I’m the oldest. … I just need to go to the bathroom.

At this point Gustafsson gets up and leaves. “Can you make sure he doesn’t do that again, please?” a ticked-off UFC staffer asks his trainer, who shrugs and shares a joke, giving the impression that any attempt he makes to corral Gustafsson wouldn't make any difference. After a few minutes, Gustafsson returns and we pick up where we left off.

You got into some trouble with the law when you were younger …
I didn’t do MMA or sport back then. I had a lot of energy and was hanging out with a bad circle. It continued for a couple of years. It was shitty things, never serious. Young, stupid things I did as a kid. I was bored and had a lot of energy. Growing up in a small town, I didn’t have much to do. I wanted to go to a bigger town. That was it, more or less.

He pushes another polite smile across his lips and we’re done. A few days later we pick up again via email. This time Gustafsson is in a better mood.

What didn't you like about doing interviews in the same room as Manuwa?
It's difficult when you're fighting someone and doing interviews like that. It's nothing personal, but it's good to have a certain distance from each other. I don't want my opponent to find out too much about me.

What was your reaction when you won the UFC EA game box cover vote?
I was very happy, of course. I was pleased to have so many fans vote for me. I followed it online and through social media and, yes, I did vote for myself.

I didn't play too many computer games growing up, but I do a bit now. I like action games, shooting game,s and some fighting games. I’ve never seen anything like the computerised version of me before. It's amazing, really realistic.

Has anyone given you a free Xbox yet?
No–but hopefully they will!