Alexis Davis and the Joy of Fighting 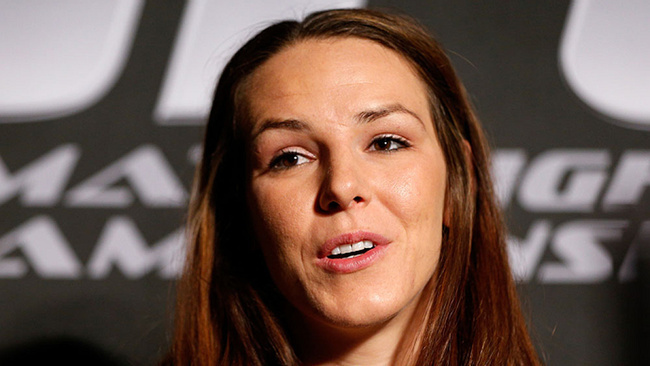 When challenged to jump into icy cold water to raise money for baby Landon Shaw, who is fighting cancer, Alexis Davis belly flopped into the pool… dressed as Batman. Thousands of people have made videos for Landon, plunging into cold water and challenging others to do the same (over $250,000 has been raised from video challenge donations). But Davis upped the ante amongst her fellow WMMA fighters when she leaped into the water as the caped crusader, challenging sisters and Invicta fighters Zoila and Stephanie Frausto to take the plunge. This video is a prime example of how Alexis, known to her friends and family as Ally, moves through the world: exuberantly, kindly, and with a strong tinge of silliness.

In an industry built on machismo and violence, Alexis “Ally Gator” Davis has no problem facing some of the toughest girls in women’s MMA. With a 16-5 record and a BJJ black belt, Alexis will battle Ronda Rousey on July 5th at UFC 175 for the Bantamweight title. The media has interviewed Alexis on several occasions, ceaseless asking her how she will deal with Ronda’s arm-bar and what she thinks of Ronda’s legendary boasting. Instead of reiterating Alexis’s rather polite rebuttals, I spoke with the contender about her life outside of the gym, her favorite foods, and her willingness to take on challenges.

Alexis grew up in Niagara Falls, Canada, and after high-school, she worked with her mother as a book wholesaler until she began fighting and teaching full-time. She fell in love with fighting in high-school when she and a friend decided to start training kickboxing to ‘get in shape.’ After watching one of her instructors fight, Alexis decided to give it a try, although it took over a year and a half to get her first fight. Her first fight was in 2007 when she faced Sarah Kauffman, who by then already had a 3-0 professional record, while Alexis had gone straight to professional without any amateur experience. Alexis lost that first fight, but came back to win her next six fights before joining Strikeforce, Invicta, and then, the UFC.

Like many of the women who fought in Strikeforce and other large promotions before the UFC, Alexis is close with many of her colleagues, both from training and competing in the same venues. She also met her husband, Flavio Ralf Meier, through training. Flavio is a BJJ black belt who has won championships at the U.S. Open and the Pan Ams. Like many martial arts couples, Alexis and Flavio trained together before they began dating. The two workout together every day and Flavio is always in her corner during her fights. “He pushes me,” Alexis explained, “he is always like ‘one more round, one more round.’ We are compatible, and always have the same [idea] of when to train and when to relax.” The couple has three children (Flavio’s from a previous relationship), and when they are all together, Alexis says it is “complete chaos,” but also “really fun.” They also help her take her mind of from training because she can focus on the three boys and Flavio and enjoy their time together as a family. “But when the week starts up again, its fight mode.”

Outside of the gym, Alexis and Flavio are very relaxed, taking walks together, going to movies, and, when not in fight prep, going out to eat. But even when she is cutting weight, Alexis loves to watch Chopped on the Food Network. She jokes that while it drives her husband crazy when he is trying to cut weight, she thinks it helps her cut. Alexis also excels at eating contests, according to her friend Sam Wilson, who is a MMA matchmaker responsible for catapulting numerous women, including Alexis, to elite fighting venues. After taking a fight on one day’s notice and traveling to California (the fight fell through at the last minute), Alexis, Sam, Lana Stefanac and Jen Babcock decided to try to take down a burger challenge at a local restaurant. This bevy of truly badass women each undertook to eat an enormous triple patty burger, but Alexis was the only one to finish. “I like the challenge,” Alexis admits, “and if someone dares me to do something, I am usually up for it.”

And her willingness to take on any challenge with joy and excitement is what makes Alexis Davis such an interesting and endearing person. She has taken several fights on short notice, but she has plenty of time to prepare for her upcoming fight with Ronda and she is thrilled to take on the challenge.

Alexis is the kind of person who finds joy in everything that she does, including fighting. She is often seen grinning during her fights, at moments that seem antithetical to the act of smiling. Sam Wilson once asked her why she smiled during a fight, and Alexis explained that it because she was happy. Sam explains,

“She has been the most underrated fighter, yet has produced back-to-back fight of the year awards.* She has submitted those who have never been submitted and probably holds the most stitches for female fighters. She is a true athlete, one that respects all of those [people] who are involved.”

The UFC culture is ruthless, and some fighters who desperately want to rise to the top often have to resort to excessive boasting in order to get attention. Sam told Alexis that it was time to get mean, but Alexis merely said that she had “no reason to be mean,” and would instead prove her worth in the cage. She has certainly demonstrated her merit in the past year, defeating five high-caliber fighters in a row. After two straight wins in Invicta (Hitomi Akano and Shayna Baszler) and three in the UFC (Rosi Sexton, Liz Carmouche and Jessica Eye), Alexis is on a victory streak and ready to face Ronda at UFC 175. Be prepared for her dominant kickboxing, her excellent ground-work, and, of course, her smile. 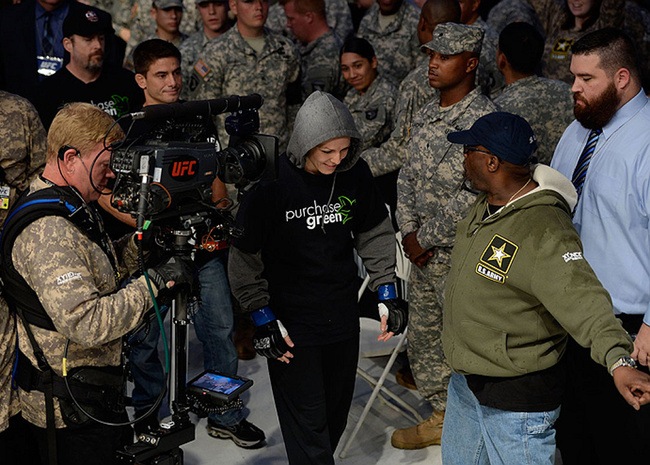 UFC Star Julianna Peña on Fighting with a Smile