Always the Underdog: Recalling the Skills of 'Notorious' Nick Newell 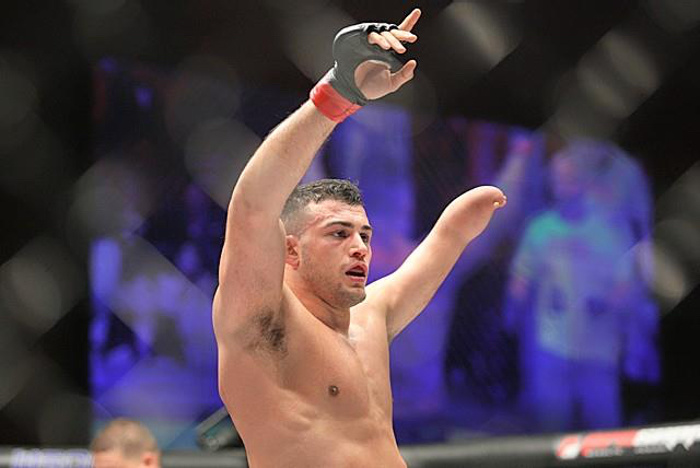 I have been outraged hundreds of times as a spectator of combat sports. Outraged, disgusted, upset. A full spectrum of negative emotion inspired by mismatches, freak fights, terrible officiating, and blatant protection of golden and boys and girls but my eyes have always been able to remain on the fight. The sole fight that I can think of which upset me to the point of needing to turn away was Kyle Maynard's MMA debut.

Kyle Maynard is an inspiration. Reading his list of accomplishments in all other fields is enough to leave you glassy eyed. A quadruple amputee, Maynard went into wrestling at high school and after losing his first thirty-five matches he persevered to finish in twelfth place in his division nationally. Maynard even became the first quadruple amputee to climb Kilimanjaro without the aid of prosthetic limbs. But Maynard wanted an MMA fight and no athletic commission was going to license that so it was taken to Alabama, a state with no regulating body to oversee MMA events at the time.

When the bell rang I found myself being more upset than I ever imagined. This wasn't like wrestling where Maynard's opponents had to commit to turning him to his back and where his tremendous proportional strength for his weight could be brought into action. There was no reason for his opponent to engage him. If he'd been quickly smashed and saved by the referee I would have been upset for a while but I would have forgotten all about it. Instead, Maynard was pitied for fifteen minutes as his opponent easily sidestepped him and refused to throw blows at the defenseless Maynard. There is nothing so upsetting in combat sports as pity and the image of Maynard shuffling across the ring and his opponent palming him off like an older brother is etched on my mind as freshly as when I first watched it.

That was the moment that the empowering, inspirational story met the harsh reality of a fight. In a professional contest the slight disadvantage of one man having less than a hundred percent vision in one of his eyes will make an enormous difference. It is not the sort of sport in which great strides are going to be made for amputees. Or at least, that is what you could be forgiven for thinking.

On October 17th, Nick Newell announced his retirement from professional fighting after a hard fought decision victory at WSOF 24. 13-1 with ten finishes, Newell had picked up a minor title in XFC and had fought for the WSOF lightweight title. Decently accomplished, but not the numbers or accolades of an all time great. What makes Newell worth remembering is the fact that he did it all with one arm.

Born with a left arm that ends just below the elbow, Newell is another one of those inspirational stories who came up through wrestling. As Maynard, Newell and one-legged 2010 NCAA 125 pound champion, Anthony Robles will attest, wrestling practice and competition do not take it easy on those with disadvantages. Through watching The Ultimate Fighter, Newell decided he wanted to make a serious go of it in professional fighting.

In one of those stories that makes a fan almost glad that MMA is still the Wild West of professional sports, Newell procured a license to fight professionally after a short amateur career. During that time he struggled to find opponents willing to fight a one-armed man simply because having that kind of win on your record will almost make it look worse. After turning professional and accumulating five finishes, Newell was signed to XFC and won his first fight under the promotion by heel hook in seventy seconds. This made Newell, in a cult MMA way, an Internet sensation.

What is incredible about Newell is that the science of fighting is built around having two hands and two legs. At the most basic level the right arm takes care of attacks from the opponent's left side, and the left arm deflects or defends against attacks from their right side. Everything stems from that, it's one of the ten rules laid down in Daniel Mendoza's treatise on boxing published in 1789 and you will see it in action in every fight since.

Newell's body was, to put it brutally honestly, deficient for what we know as the science of fighting. With no left forearm and hand he would have difficulty blocking the opponent's right middle and high kick. He would have trouble with looping right hands. Newell stood southpaw so that his full-length arm could be his leading hand, but if he wanted to land with his left elbow he had to close the distance completely to land it. And combining long right hands with short left elbows in rapid combination—which he did—would take a real understanding and control of distance to pull off. Even kicking techniques are effected by the loss of an arm, as the throwing back of the same side leg often serves to counterbalance the body as the weight is thrown into a hard kick.

Newell could study tape of the One Armed Bandit of Muay Thai, Baxter Humby, but it was Humby's right arm which was short and he fought orthodox, against other pure kickboxers. Newell was not fighting at a simple disadvantage of missing one element of the game, the entire basic striking game was irrelevant for his body and he had to develop of a whole new way to fight. Where every other fighter in the game is building on the knowledge of generations of men experimenting with how best to use the human body, Newell was tasked with coming up with something new under fire.

Newell recognized the shortcomings of being half an arm short of a full guard, and as grappling was his forte to begin with his game was focused around getting to the mat, where he was tremendously slick. He mitigated much of the threat of the striking game with good footwork and the constant threat of the clinch.

After a series of matches against so-so opponents, Newell met the first and only world class fighter of his career in WSOF lightweight champion, Justin Gaethje. In what is considered to be the most talent rich division, Gaethje is the finest fighter outside of the UFC. Undefeated, a tremendous wrestler, and a knockout artist, Gaethje is as legitimate as they come.

Punishing Newell's body with right-handed strikes and kicks, Gaethje exploited every disadvantage Newell faced, while shucking off every takedown attempt Newell made. Newell got a few licks of his own in against the lightweight champion, and survived into the second round, but Gaethje proved far too much for him. In the second round Gaethje threaded the needle on a right hand as he slipped Newell's jab and dropped Newell to the mat. The referee stepped in to call off the fight as Newell protested.

That's not a particularly heart warming way to end an inspirational story, I'll grant you that. But the wonder of the story is not in whether or not Newell won a respectable belt—as a one armed man in the sport of fist-fighting, he was overcoming expectations just to win fights. No, he never beat any top condenders, but he bested some respectable veterans. What really fascinates and inspires when talking about Newell is going back through his fights and studying the tape. Not one of those opponents is pitying him or taking it easy. Most of them aren't even thinking about the fact that he has just one hand. They're too busy worrying about the fact that he's throwing blows at their heads and trying to take them down.

One of the top lightweights and best finishers in the game, fighting at his hardest, couldn't get rid of Newell any quicker than he could any able-bodied opponent. In fact, that fight was a one sided beating by most standards, but at no point did it upset or worry or disgust. Newell was just a fighter on the losing end of a beating, his having one arm barely factored into it.

And that was the brilliance of Newell. He wasn't a world-beater, and his wins aren't that big. But through his ability he made his disability an afterthought to the men he was fighting and, in all but one case, beating.

A Fighter's Chance: The Adaptive Athletes of MMA