Amanda Nunes Is Dead-Set on a Fight with Ronda Rousey, and She Might Just Get It 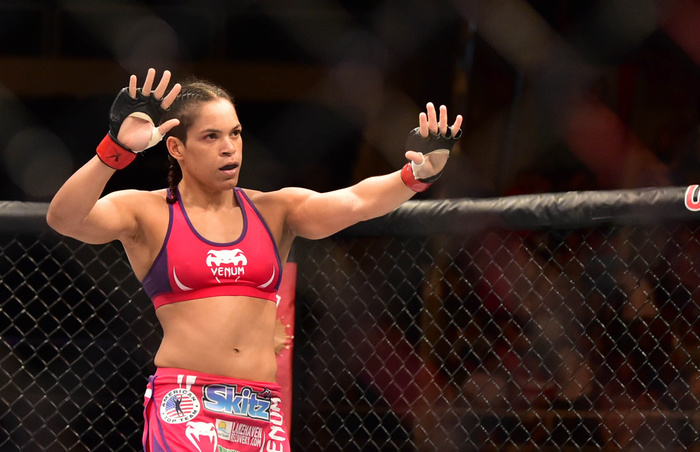 Earlier this year, in the main event of the universally anticipated UFC 200, Amanda Nunes yanked the UFC women’s bantamweight belt from the waist of Miesha Tate with a first round submission victory. It took the challenger just 3:16 to dispatch of the highly regarded champion.

Under normal conditions, Nunes’ focus would have then shifted to her first defense. This defense likely would have pitted her against The Ultimate Fighter 18 winner Julianna Peña, who is currently riding high on a four-fight streak, or Kyrgyzstan’s Valentina Shevchenko, who recently burst into title contention with a decision defeat of former champion Holly Holm. Conditions in the UFC women’s bantamweight division are far from normal, however. That fact can be attributed to one woman: Ronda Rousey.

We have not seen Rousey in almost a year, when she chowed down on a Holly Holm head kick and gave up the bantamweight title that almost nobody thought she could lose. Throughout this year long absence, there have been several moments when it looked as though the incredibly dominant former champion might be ready to burst back into competition, yet so far, it hasn’t happened.

Over the last few weeks, however, we’ve been given some real reason to believe that Rousey’s comeback is finally in the works. The most significant of these clues came from UFC president Dana White, who recently told Brazilian publication Combate that the former champ could return to action before 2016 is over.

The ever-growing possibility of this Rousey comeback is precisely what makes the the bantamweight title picture so murky. As impressive as Peña and Shevchenko have looked recently, their spot at the front of the contendership line would undoubtedly be stolen by the dominant former champion, should she choose to return to action.

The new champion Nunes understands this. She also understands that a fight with Rousey is far and away the most lucrative option on her horizon. For this reason, the champ is unabashedly campaigning for a Rousey showdown.

"If they ask me who I want to fight, I’m going to say I want to fight Ronda,” Nunes recently told Combate in a Portuguese interview translated by MMAFighting.com. “I’m not running from anyone, I’m the champion and I can choose who I’m going to fight. I will choose what’s best for me and Ronda would be the main fight, that’s why it has to be against her, it has to be with Ronda."

Nunes assertion that her status as champion gives her the right to pick and choose her fights has not gone over well among her bantamweight peers. This should come as no surprise. It wasn’t all that long ago, after all, that reigning welterweight champion Tyron Woodley found himself in the middle of a social media firestorm for demanding lucrative fights with Georges St-Pierre and Nick Diaz over one with the division’s number-one-contender Stephen Thompson. Yet Nunes is undeterred by the backlash she’s received from the contenders circling her throne.

Should Nunes get her wish, she’s optimistic she’d come out on top against the former champ. She believes Rousey shares this outlook, which is why she is taking so long to sign her contract.

"I train at American Top Team today,” Nunes said of her headquarters, which is home to monsters like Robbie Lawler, Yoel Romero, and now, UFC strawweight champion Joanna Jedrzejczyk. “[It’s] the biggest MMA gym in the world, and it will be complicated to take this belt away from me."

"Ronda knows what it’s like to have this belt, she knows the power this belt has,” the champ continued. “I think that’s why she’s taking so long to sign this contract."

Yet as Nunes explained to Combate, she believes Rousey will soon crack under the pressure and put pen to paper.  According to the new champ, a fight with Rousey is “highly likely” for UFC 207 this December 30th. A Wednesday night report from the ever-reliable Ariel Helwani gave more weight to this claim.

Though it’s certainly going to draw the ire of Peña and Shevchenko, it looks as though Nunes will soon get the fight she’s been chasing. The big question, however, is whether or not she’ll wind up regretting her rabid pursuit of a fight with the dynamic former champion.