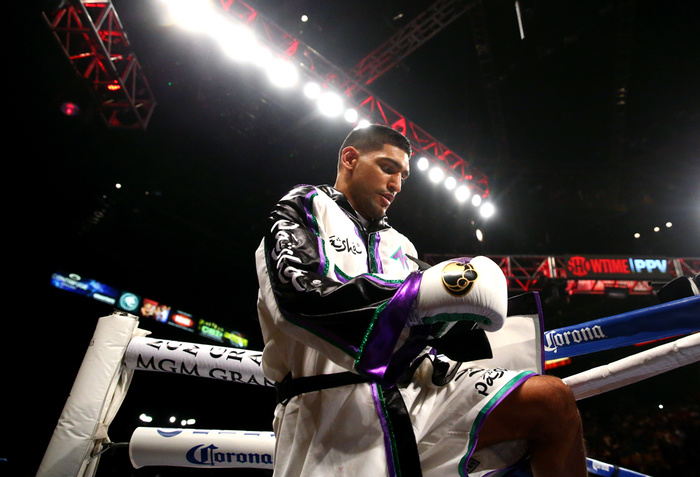 Amir “King” Khan will be taking on Saul “Canelo” Alvarez on Saturday night in what is undoubtedly the biggest fight of his boxing career.

The match-up between the pair, set to take place in Las Vegas’ new T-Mobile Arena, was met with plenty of controversy—so much so that the WBC was forced to defend its prized middleweight title fight in an unconventional move reflective of the chagrin expressed from boxing fans the world over.

The most contentious issue with this fight is the fact it will be fight for Canelo’s WBC, The Ring magazine, and lineal title contested at a catchweight of 155lbs, well below the middleweight limit of 160lbs. This is the first time Khan will be fighting as a middleweight—in the loosest sense possible—despite not being close to a world title shot at his home at the welterweight limit.

In fact, Khan was a world champion as a light welterweight—three weight classes below Canelo’s middleweight berth. The distinct difference between the respective weight classes of boxing and MMA is that the middleweight limit of 160lbs means you can’t fight as a middleweight above that marker, but there aren’t any stipulations that limit what weight you are below that 160lbs amount. For instance, it doesn’t matter if you weighed in at 135lbs as a lightweight competing for a middleweight title—as long as it’s under 160lbs, it’s all good.

This is a fight that made little sense besides a big payday for both men and is truly indicative of the issues that arise in this splintered era of boxing we find ourselves following. There’s no doubting the financial interest here—Oscar de la Hoya’s Golden Boy Promotions are predicting a pay-per-view buy rate of over 2 million.

Despite the obvious issues that surface when fighting a talented man much bigger than you, Amir Khan’s thoughts appear to be elsewhere: another interview, another mention of potentially making the move from boxing to MMA.

Unlike long-time rival Floyd Mayweather Jr., who expressed his interest in promoting MMA events and fighters in the future, Khan has already dipped his toes in the MMA market. In 2015, Khan became the co-owner of India-based promotion Super Fight League (SFL), which host events in south Asia, the Middle-East and in the United States.

Talking to The Guardian during the final stages of his fight preparation, Khan revealed he has been training some MMA techniques ahead of his fight against Alvarez as well as the fact he reckons he can easily beat any of the fighters under his own SFL promotional banner.

“Can I kick hard? I’ll try it out on you later and you can tell me. I have a stake in a company called Super Fight League, which is an MMA company in India and we have a lot of shows in Dubai, too. We are now moving over into America and putting on shows there.

“Bellator and the UFC are the two main MMA companies; we’re probably third after those two. I’ve always been a UFC fan and I like Conor McGregor and the way he promotes it [MMA]. If I was to fight the champion around 147lb I would fancy my chances. You never know what will happen in the future—I would never say ‘no’ to getting into MMA. I could do it under my own banner and what a way to do it. My speed would be perfect, it’s hit and move.

“Just look at when McGregor beat José Aldo. The guy leant forward, over extended and fell short, McGregor stepped back and threw the straight right. It was a proper boxing move. I would not let anyone get close to me, I would take a step back and keep it long. I also believe that us boxers punch harder than MMA fighters anyway.

“I was at the last SFL show in Dubai, watching closely at the guys in my weight. Even though I have no experience of MMA, I could have stepped in and done the business. I’ve already done MMA training too. It’s good for preparing to fight a guy like Canelo who likes to put the pressure on. It’s all about the feet, the feet have to be in the right position.”

Khan’s latest comments echo the sentiments he shared with Ariel Helwani on The MMA Hour last year, where he claimed: “I just love all the grappling and everything that happens in cage fighting and the technique and everything. In a boxing fight, there's not much grappling allowed. In MMA fights, there's a lot of floor work, a lot of grappling. At the same time, I'm a good puncher myself; I'm a good boxer. So at least I've got an advantage. If I work a little bit on my grappling, you never know. I might go in the cage next."

This kind of talk smacks of the usual media fluff boxers say to keep MMA fans, who are starving for the sport’s recognition and legitimisation, happy. However improbable Khan’s latest comments may be, the 2004 British Olympic silver medallist would make a much more interesting proposition in mixed martial arts than James Toney ever could. But, alas, any talk of switching sports is superfluous when you’ve got someone like Canelo on your plate beforehand.

Canelo Alvarez Says He’s Not a Middleweight; Amir Khan Thinks He Might Be