An American in Thailand: Last Night at Lumpinee - Part 1 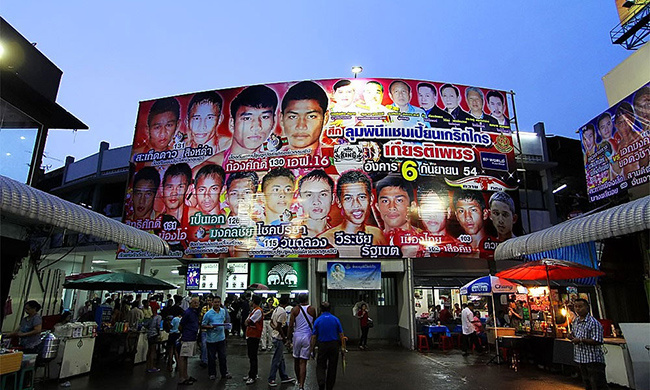 It's Friday night in Bangkok and I'm at the last big show of the old Lumpinee Stadium. After tomorrow this legendary 60-year-old venue will close forever. The new Lumpinee will open next week, about 20 miles away in the northern outskirts of Bangkok, but tonight is a real moment.

I've never seen a fight at Lumpinee because it's always been too expensive. Tonight, though, is a special occasion, so I grudgingly fork over the painful ticket price. Ticket sellers outside told me I should sit ringside with the rest of the foreigners, but those tickets cost 4,000 baht, about US $120. Even the 2,000 baht I pay for the Tier Three nosebleed section makes me slightly queasy.

Assigned seats are provided ringside. Otherwise, it's a free-for-all. No chairs in the two or three tiers, just large steps and long benches. I enter the stadium and jostle my way through the gamblers in the upper tier, trying in vain to find a viewpoint free from the obstruction of support beams and large mounted fans. I end up standing in a relatively uncrowded area near the chest-high chain-link fence that separates Tier Three from Tier Two. All around me I see Thai gamblers raising their arms, shouting to each other, making intricate hand gestures to communicate bets around the stadium. The bell rings between rounds, the fighters' corners leap into action, and the gamblers burst into a frenzy of betting. It's kind of surreal, like I'm in a movie about the Wild East.

I gaze down to the bottom floor and see all the foreigners with their blonde and brown hair sitting around the ring. I don't see any other western women here in the cheap seats. No one really pays me any mind, though, until a middle-aged Thai gambler standing at the railing sees me behind him. He looks surprised then immediately pushes his very substantial friend out of the way and says to him in Thai, "Move! Let the girl stand there and watch!"

The friend looks perturbed. Politely I say, "No, it's okay. I can stand here," in Thai.

They look at me wide-eyed. "Whoa, you speak Thai!?" the first guy asks. He has a broken blood vessel in one of his eyes, and all I can see when he talks is one lone prominent tooth.

My response, "Yeah, a little," opens the floodgates of questions from the toothless man: How long you been in Thailand? One year. Where you from? America. Wow, you're real pretty. For a foreigner.

The toothless man's fat friend, who appears to be a bookie, slaps him on the shoulder and tells him to stop talking to the foreigner and start watching the fights. But the toothless man is far more interested in talking to me than in placing bets. He tells me he used to be a soldier and points to his polo shirt, the stitching of which reads, "Airborne, All-American Land of the Brave." I appreciate the apparent pride he has in my nation. Then he launches into the other questions I always get from curious Thais, mostly involving what I'm doing here, my marital status, and whether I have a Thai boyfriend.

I'm just about to start paying attention to the actual fights when the large bookie approaches me. He produces a little glass vial from his pocket, takes a whiff of its contents, and holds it out to me. "It's medicine to wake you up," he says. "It'll make you feel better." A kindly old woman standing near us confirms this. The little vial looks like what the fighters at my gym carry around. He dabs some of the oil on my arm. It smells like Tiger Balm and I find myself huffing it compulsively for the next hour. Nice thing to have to counteract the stress of standing in a smoky, crowded, loud stadium.

Then another middle-aged Thai joins our little group made up of Toothless Man, Large Bookie, Sweet Old Lady, and Foreign Girl. He asks if I've been here before, and I tell him no, because it's too expensive. He asks me how much I paid and I tell him 2,000 baht.

"What?!" he says, seeming genuinely offended on my behalf. "We only have to pay 350 for the same ticket!"

We compare tickets. His is the same as mine, except mine has a big red circular stamp on it. "You got the 'foreigner stamp,'" he notices. It's the scarlet letter, marking me not as an adulteress but as something much worse: a non-Thai who has agreed to be price-gouged.

The man asks what I'm doing in Thailand, and he’s surprised when I tell him I came to learn Muay Thai. He looks at me with a mix of charity and pity on his face. "Don't go to Lumpinee. It's too expensive for you as a foreigner,” he says. “Go to Channel 7 fights on Sundays. They're free." He writes down instructions in Thai on his fight schedule on how to get to the Channel 7 fights. "Here," he says, handing me the note. "Tell your boyfriend to take you." I study the instructions. All I can read is "7," "1:00 (13:00)" and "FREE." The fat bookie grabs it out of my hand, narrows his eyes in concentration, then nods approvingly.

I turn my attention back to the fights below us. We're on fight six of 10. Red and Blue are squaring off; it's the last round. All of a sudden Red throws a hard elbow and Blue is on the ground, flat on his back. The gamblers across the stadium erupt into cheers and hollers of bets won and lost. I wish that support beam and mounted fan hadn't been obscuring my view during that KO. Is there an instant replay? No, that doesn't exist in Lumpinee. Air-conditioning doesn't even exist in Lumpinee. All I can see from my vantage point are Blue's legs, not moving, on the floor. The ringside doctors take him away on a stretcher through the ropes. Damn, I hope that doesn't happen to me in any upcoming fights I might have. My mom would be pissed. 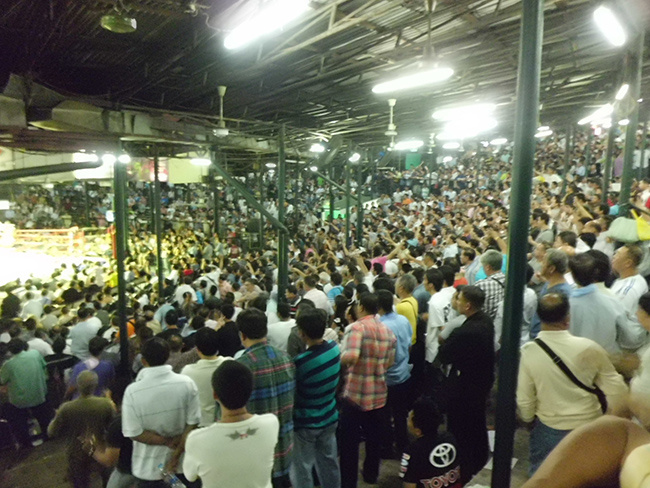 The gamblers exchange money and we wait for the next fight. I ask the nice man who recommended Channel 7 fights to me if he’d won any money on the last fight. He says no, claims he doesn't gamble. Somehow I doubt this. "But you see that guy right there?" he says, pointing to a pudgy man sitting on the steps in front of him. "That guy won 40,000 baht here last week. And that other guy over there? He won 100,000! A few months ago another man I know won a million baht!" He points to a few men within our sight: "See how many of them are wearing satchels? Those bags are full of cash." I look all around and see that he's right: A lot of men have bags securely slung over their shoulders, which I hadn't noticed before.

I ask him if he'll still bother going to see fights once Lumpinee moves 20 miles north. "Yeah, but it won't be the same," he says, shaking his head with a twinge of sadness. "I'm going to miss this place. I've been coming here for the past 30 years."

The sweet old lady, who had been standing around quietly this whole time, pipes up to refute her friend: “It'll be better!" she says. She starts ranting to me about how this stadium is too old, how it's dirty, uncomfortable, unsafe. The roof leaks when it rains. A cat fell through the rafters right near the ring during a fight just a few months ago. There used to be a dog living under the ring. "Anything would be better than this," she says.

Fight number seven is under way. Everyone around me is betting. I've never bet on a Muay Thai fight before, but I feel like I should place a bet since it's the last big night in Lumpinee. I lean sideways towards the old lady at my right and ask her who she thinks is going to win. She whispers, "Red," like she's telling me a secret. Down in the ring, Red looks confident, but Blue looks desperate. He has blood running down his face from an earlier elbow. He's aggressive; this looks like his last-ditch effort. The old lady and I join in the stadium-wide chorus of spectators cheering, "Knee! Knee!" She has her forearms resting on the chain link fence next to mine and elbows me in the arm for effect every time a good punch or knee is landed. Everyone in the crowd is engaged in this fight. It feels so communal, like I'm at a Muay Thai church.

End of round four. One more round to go. This must be an important fight because the gamblers are in a hand-signaling frenzy. I pull a fistful of baht out of my back pocket, somewhere equivalent to US $15--big money to me here. There are a couple 20s in there, which is all I'm willing to spare. I show 40 baht to the old woman, about US $1.20, and ask her what to do. She laughs and rattles off a bunch of Thai I only barely understand. I obviously have no idea what the hell I'm doing. Then round 5 begins, leaving me unable to place a bet in time.

Toward the end of the fight, the gamblers start chanting in unison, "Stop! Stop! Stop!" in Thai. The fighters are bouncing in their martial stance, looking fierce but listening to the gamblers. No more fighting, just looking maniacal. And tired. The final bell rings; both of them are bloody. Blue is declared the winner. It must have been a title fight or something because that kid is super freaking excited. Everyone from his corner is running in and hugging him. Glad I didn't listen to the nice old lady or I would've lost 40 baht, which is enough to buy me dinner here. She turns to me with a big grin. "Well, Blue won!" she says. "This is why I don't gamble. And this is why you shouldn't gamble either!"

She's right. Call me ignorant, but I don't understand this gambling thing at all. Pretty much everyone in the place was chanting for the fighters to stop, suggesting the gamblers knew who was going to win on points. But if everyone has their money on the same person, how does the gambling work? I wish I could ask the Thais around me, but my Thai is barely good enough to have the simple conversations I've been having tonight; it’s certainly not good enough to understand the inner workings of Muay Thai stadium gambling. I doubt I could even understand it in English.

In the meantime, check out these earlier installments of "An American in Thailand":

Giving Your Life to Muay Thai

My Professional Wrestling Deathmatch With a 14-Year-Old

The Lure of Overtraining