An American in Thailand: Muay Thai for the Rich 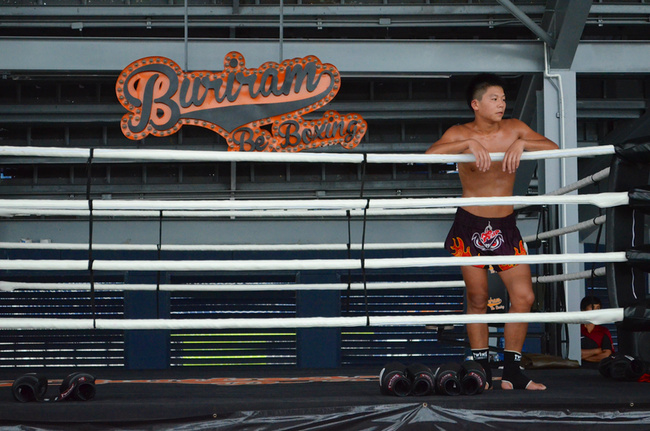 The first customer walks in, balancing her boxing gloves atop a box of Dunkin Donuts and carrying a "Venti" size of coffee from Amazon, Thailand's answer to Starbucks. She glances at the mirror on the way into the changing room, perhaps judging her light skin, healthy curves, or well groomed black hair, tinted a slight red. A few minutes later she emerges, having swapped her short black dress for a bright red "Topshop" shirt tucked into a pair of black and white Muay Thai shorts, stiff in their newness.

Soon arrives another attractive young Thai woman with a venti Amazon coffee and red-tinted hair. She changes into her fashionable Muay Thai clothes as well, leaving on makeup and a gold chain necklace, and joins her friend in the Topshop shirt. They chat while waiting for class to start, giggling and flirting a bit with a couple young Thai trainers who walk past.

More women trickle in, their workout clothes adorned with the slogan "Buriram Be Ballin'," in reference to the local soccer team. This gym, cleverly titled "Buriram Be Boxing," is a tiny part of the Buriram United conglomeration. Built in an unlikely location in an unlikely area of Thailand, Buriram Be Boxing commands the spacious area under the corner bleachers of the New I-Mobile Stadium in Isaan, the country's poorest region. 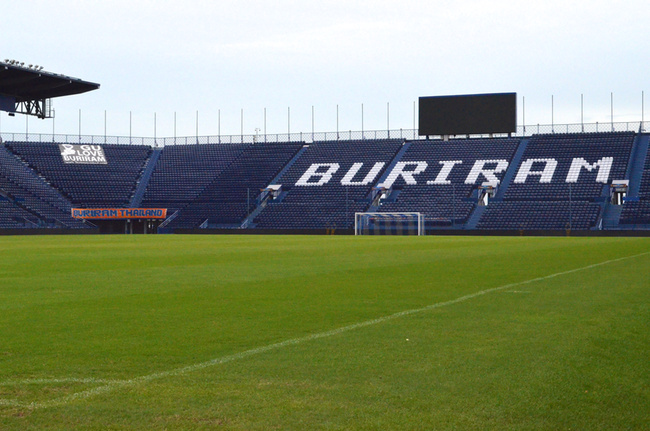 Soon the women, about a dozen in all, are rounded up for class by head trainer Namkabuan Rajapuk-Cafe, once a Rajadamnern Stadium champion in his youth, and Bangsen, Namkabuan's second-in-command and a former member of Thailand's prestigious national boxing team. The women place their towels and smartphones off to the side and form a few lines facing the mirrors. Namkabuan switches on the sound system while Bangsen begins leading the class through Muay Thai-inspired warmups. Thai and foreign pop hits provide the soundtrack to their cardio shadowboxing and choreographed shuffling.

"This gym is really the first of its kind in Isaan, as far as I know," Namkabuan tells me. Leaving Bangsen in charge of the warmup, he walks me around the gym and points out the full-length mirrors, fully equipped weights area, and brand new ring. 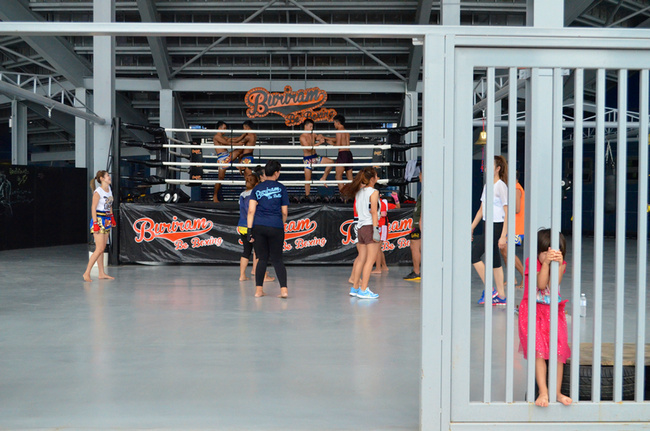 There is little about Buriram Be Boxing that is similar to your standard Isaan Muay Thai gym. No one cooks or sleeps here; it's not a home for the fighters, unlike many other gyms in the area. The few professional nak muay that I see clinching and sparring in the ring come from Namkabuan's other gym, taking time every afternoon to act as trainers for the rich, largely female, non-fighting Thai clientele here. The gym sits under the bleachers of a soccer stadium, and it's ridiculously clean. The floor looks like concrete but it's soft and bouncy, and the janitorial staff cleans it constantly during the training sessions.

I'm told the floor alone cost 1 million baht (about US $31,000). In fact, the entire Buriram United compound, which includes the gym, the soccer stadium above it, and the adjacent 4km-long Buriram International Circuit, still under construction and set to host both racing and auto testing, is projected to cost a minimum of two billion baht (US $62.2 million). The political and economic backers of this development claim it'll change the poor province of Buriram into an international destination, and increase the area's GDP by 300 percent.

If this gym and its students are any indication, Buriram's economy is already improving. "We've only been open a couple months but already we've had about 100 students sign up, all local Thais," Namkabuan tells me, looking both proud and a bit surprised. 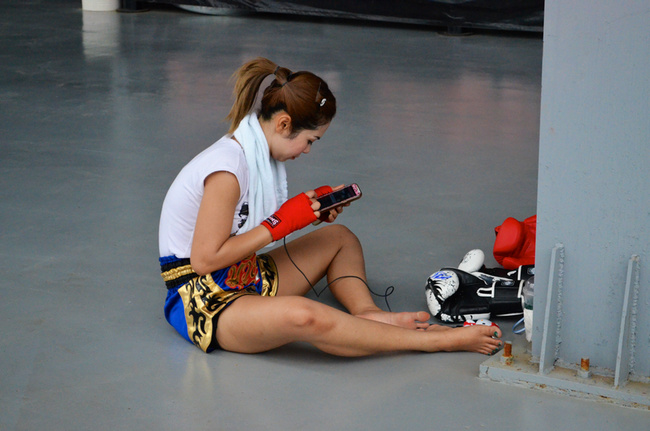 Born and raised in Sisaket Province, Isaan region, Namkabuan started training Muay Thai at an early age. Like so many other fighters from rural Thailand, his fight earnings were used to support his family. "We were poor, and my family didn't particularly want me to fight, but I was able to earn enough money through fighting to help my siblings attend school. Now they work in government jobs." Namkabuan later married into the family that owned Lookchaomaesaithong, a local gym famous throughout Thailand as having raised the internationally acclaimed champion fighter Coban.

"I left Thailand for a while and worked as a trainer all over the world," Namkabuan continues. "I've worked in Indonesia, China, Japan, the US… All over, really. And I've seen a lot of different styles of gyms. Then I came back to train professional fighters at Lookchaomaesaithong Sitnamkabuan Gym, and recently I was approached about running this new gym here."

After witnessing Muay Thai implemented in gyms around the world to cater to both fitness enthusiasts and professional fighters, Namkabuan enthusiastically accepted the chance to try his hand at running a fitness-oriented gym in his home country. "I've been training fighters for decades now," he says, "but this gym is for a different crowd. They're not fighters, and sometimes it's a challenge to keep them motivated and interested. One of my goals here is to teach people the benefits of Muay Thai as an overall exercise. A lot of our students are women, and they feel more comfortable in this environment as opposed to your standard Muay Thai gym in Isaan." 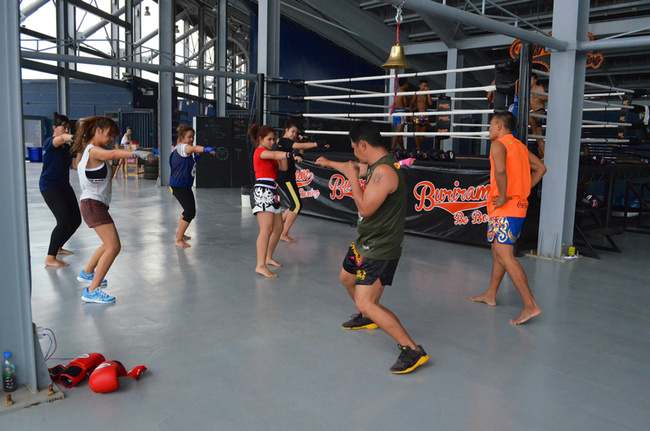 After the warmup, Namkabuan jumps in next to Bangsen and faces their class of nearly a dozen Thai women, all relatively rich by local standards. "Neung, song, saam, si!" he counts to the beat in Thai, his voice barely audible over the pop songs echoing around the cavernous gym. In a scene reminiscent of an American '80s aerobics class, the women follow his and Bangsen's lead, copying their energetic boxing combinations and looking appropriately intense.

The group class is temporarily disbanded during padwork. Some women are instructed to lift weights in front of the mirror while others hit pads with the two lead trainers and a few other young nak muay from Namkabuan's fighters' gym. Most of the women take the padwork seriously, though one woman can't stop laughing (presumably at her own awkwardness), and another pair of rich-woman-poor-Thai-fighter is visibly flirting.

After pads, Bangsen pulls aside a few women one-by-one and instructs them in basic, real-world self-defense, something I've never seen done before in a Muay Thai gym in Thailand. They stay on their feet and practice escapes from various grabs, Bangsen looking somber and professional while some of the women giggle at their own technical incompetence. 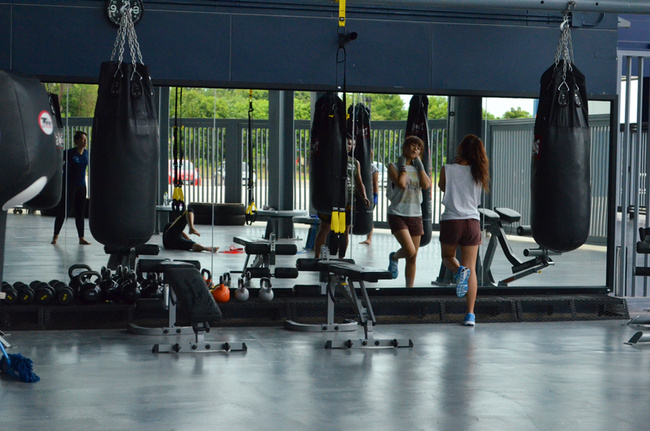 Namkabuan observes the self-defense training thoughtfully. "One of the important things about our gym is that we train people here in real Muay Thai, with real techniques, even if they're not fighters. We also teach self-defense like this because we want our students to feel confident that they could protect themselves in different situations.

"That's not to say we wouldn't let our students here fight," he adds quickly. "If they're interested and capable, we'll prepare them to fight. But the clientele here is vastly different than at your average Thai gym, and most aren't interested in going pro. They're not farmers or fighters; they're white-collar employees or students from a different class of Thai society." 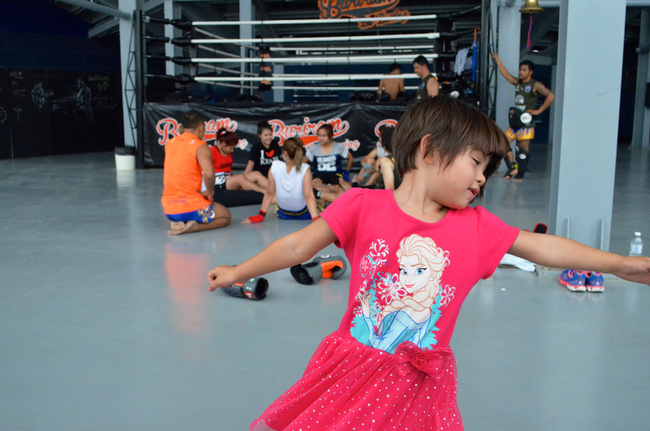 The culmination of class consists of the students forming a circle on the ground for group stretches and ab drills. Namkabuan participates right along with them, demonstrating each exercise while Bangsen circles the group and counts down the number of reps. After group cool-off stretches, the class is dismissed. A couple women wander over to the weights area and perform some last-minute exercises, while most of them gather into clumps along the sidelines and enjoy a post-training social hour.

I wander over to Namkabuan and ask him if he ever foresaw himself working in a gym like this in Buriram, of all places. "I've seen a big shift around here over the past few decades," he says with a little laugh. "It's a very different mindset now. I think the previous generations would work too much, regardless of whether they were businesspeople or farmers. They'd work and work, with no time to take care of themselves or pursue other interests. Fortunately, this generation seems to have shorter workdays, so they have time for recreation. I think it's a positive new trend in Thailand. More and more people want to take care of their health, and I'm happy to be part of it."