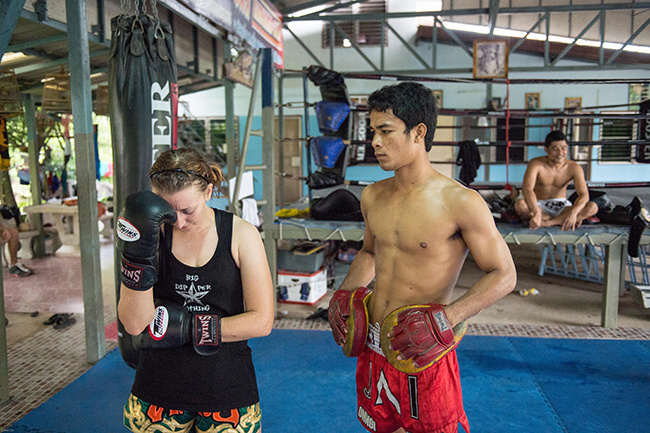 The author and Gong (photo by Rob Cox)

[Ed. note: For the past several months, Lindsey Newhall has been living at a Muay Thai camp in rural Thailand, training for hours a day and soaking in local traditions. We asked her to keep a journal of her experiences.]

I didn't come to Thailand intending to be a fighter. I came to Thailand because I just wanted to train Muay Thai for a while after my most recent work contract ended. Sometime around month six, though, the head trainer at my gym approached me about actually fighting. After two weeks of thinking about it, I decided yes, I do in fact want to start fighting. I was not, however, prepared for the response I received from my main trainer, Gong, and I started to wonder: Where's the line between being honest, being motivational, and just being mean? It started back in August ...

Ever since I got on my "I'm going to start fighting" kick this morning, I've been taking training much more seriously. I was almost on time for afternoon training--only five minutes late instead of the usual 15. And I hit the bag really hard for all three rounds. When Gong held pads for me for five rounds, I was extra-focused and extra-intense, which I'm sure was reflected in my extra-loud and extra-creative vocal exertions. Gong pushed me hard, but I know he must have been impressed by my newfound inspiration and intensity. He laughed at my incompetence only a handful of times, and he didn't have to make me put my arms over my head quite as often so he could hit me in the stomach--standard punishment for messing up a technique. If he said 30 kicks, damn it, I did those 30 kicks, with minimal delay, bitching, or breath-catching.

That's why I am a little surprised and confused at Gong's reaction when I turn to him at the end of our rounds together and tell him in our combination broken-Thai-broken-English method of communication that I want to start fighting. Instead of the wide smile of approval I expected, I receive a wide smile of amusement. He says to me in Thai, "You want to start fighting?!" and proceeds to laugh in my face.

What gives, G-Dolla-Holla? Can't you see from my one good training session today that I'm all in now?

"Linsee, you don't even run every morning."

"This was just a bad week!" I say, struggling to find the right words from my miserable Thai lexicon. "I went on too many dates this week! I'll start running every day."

He just smiles kindly, cocks his head, and looks doubtful, like he's looking at a fat, awkward kid who said she wants to grow up to be a Victoria's Secret model. Well, excuse me, Gong, if I didn't have the good fortune of being born male in a Muay Thai-centered family that started me training when I was 8 years old!

Over the past few months, Gong and I have been training together exclusively. All that time spent together in the gym, plus our occasional weekend Thai-English language exchanges, has made Gong, once reticent and aloof, more comfortable opening up to me. He knows how I fight, how I train, my good habits and my constant basic mistakes, knows what kind of motivators I respond to and how to communicate with me not only verbally but on a physical level.

That's why I am a bit taken aback and totally discouraged with his blatant lack of confidence in me when I say I want to start fighting. I've already been at the gym nearly six months, training virtually every day. Doesn't that count for something? "How long would it take me to be ready to fight?" I ask him. "Two months? Three months?"

He thinks about it. "If you ran every day, and trained every day really hard, maybe two or three months, yes. Maybe."

Three months? Perfect. I love having timeframes. Run and train, run and train. I can do this, no problem.

I have been running every morning and attending every session for the past three weeks. It doesn't get easier. Actually, it's getting harder. Am I overtraining? Wait, Gong must be pushing more because now I'm in it to fight, right? Is that why my sparring partners are going so much harder on me, as evidenced by my constantly sore nose and my whole body dotted with bruises? Whatever the reason, lately I feel like I'm regressing, actually getting worse. Is that even possible? My motivation is fading fast. I think Gong can tell, especially today. It's a shit-show on pads with him.

"Linsee!" Gong, focus mitts on his hands, is yelling at me, exasperation paining the normally bright smile on his face. "Linsee! We train together every day, EVERY DAY! And we do kick every day, and I tell you KICK BODY when we spar. But what you do? Low kick! All you do is low kick! Okay sometimes okay low kick, but you need to KICK BODY. Why you no kick body? Every day we train!" Then he pauses, wonders if he's made his point clear, probably also wonders how he got stuck working with this trainwreck of a fighter, and spits, "THIRTY PUSHUPS!"

He's had it out for me ever since our last session yesterday, in which we sparred and apparently all I did was "low kick." I feel so bad right now, like I'm letting him down. For the next few rounds, he makes me do sets of 30 pushups every time I mess up a technique. I think I've done about five sets of these pushups in the span of two rounds. For not twisting my hips enough when I kick. For not stepping in when throwing an elbow. For not "standing strong" when blocking. Real basic shit that I should not be having problems with. He's openly frustrated with me, and I'm frustrated with myself. I am a nightmare at this game. And poor Gong, he trains me so well and so patiently every day, has been for the last three months. I've been here a total of six months so far, and this is all I have to show for it?

Muay Thai isn't a solitary sport. You may be the only one in the ring against your opponent when you fight, but your trainers and sparring partners, your entire gym family, are what builds you into a fighter. Now I not only feel crappy that I am probably the worst person training at this gym, but I also feel like I am letting my trainer down. Apparently, this is a very female response. Men and women have very different psychological preferences when it comes to motivation from coaches and trainers in sports. For men, attack their ego. For women, focus on camaraderie and "doing it for the team," use praise and guilt.

Gong may be a fantastic fighter, a former champion, and a great technical trainer, but I very much doubt he has studied sports psychology to any extent. But he has creative motivational techniques all his own, and he's been having to use all of them on me lately.

I suppose Gong's Motivational Technique #1 would be: Be honest with your fighter about how you really feel about their performance: After I get up from one of my many sets of 30 pushups, this time for not using enough power when kicking, Gong looks at me and says, "Linsee, I am so disappointed in you. So disappointed." He just shakes his head and looks down. Damn, do I feel bad now.

Then he orders me to do another 30 pushups straightaway. Apparently he's so disappointed, he needs more time before he can look me in the eye again. When I stand up after this latest round, he makes me put my arms up and my hands on my head and proceeds to whack me in my abdomen about five times with his focus mitts while repeating, "POWER! POWER! POWER!"

Feeling dejected though somewhat amused by the minor beating, I try to give him a quick semi-hug, as has become my occasional habit when I need to center and refocus myself with him. He backs away from me and says, "No no no!" and throws a knee at me instead. Apparently there will be no hugging or coddling of any kind in this Muay Thai gym when a fighter's performance in training is so outrageously shoddy. Gong certainly is well versed in Technique #3, which is to identify a fighter's emotional and physical intimacy preferences and exploit them.

We continue to train. Gong has obviously lost all respect for me as a fighter today, has now taken to imitating my god-awful technique while calling himself "Linsee" and laughing uproariously every time I make a mistake. (Technique #4: Use humor as a coping mechanism when your fighter is driving you crazy).

Gong gets creative with Technique #5, which is to give your fighter a strong fighting name to be internalized and drawn upon for motivation as needed. His interpretation of this, however, is not to give me a powerful, inspiring name highlighting one of my strengths but rather to remind me how unbelievably shitty I have turned out to be. He says to me in English, "Suck! You suck!" In Thai: "I'm giving you a new name, Linsee." Back to English: "Sucking! Sucks! Sucky Linsee!"

Wow. This is the first time a trainer or teacher of any sort has ever given me a nickname based on my suckiness. Perhaps it is deserved, but I don't know how to react. Being referred to as "Sucky Linsee" is discouraging, but, as Gong's informal English teacher, I also feel a little proud that he's able to use the colloquial English insult I taught him last week in such a creative way. He smiles so happily when he tells me how much I suck that I can only assume he's proud of his linguistic progress as well. Internally, I celebrate with him.

I take it all with a grain of salt. We all have "off days" at the gym. Some of us, like me, have "off months." And trainers are human too. Normally I refer to my trainer in my mind as "Saint Gong" because he is always so patient with me. We're both human and bring to our training relationship all the messiness that our humanness entails. And it's mutually beneficial: I'm learning from him to be a better fighter; he's learning from me how to train and motivate someone who so clearly sucks.

And there's nothing like the motivation that comes from trying to prove someone wrong. That's Gong's Motivational Technique #6: Make your fighter angry. After the pad work is all done and I'm left alone to knee the bag for five minutes, I reflect on this afternoon's training session. All I can think to myself is, “Gong, you may make me do 200 pushups and you may tell me how much I suck and you may punch me in the face all the time and you may be some kind of champion or whatever, but you will not defeat me. Do you hear me, Gong? You will not defeat me! I will not quit trying. I will keep getting back up. You think I can't do it? I will keep showing up to every session, just to prove you wrong.”

I guess the Gong Motivation Method is working.

Check out the first installment of "An American in Thailand":