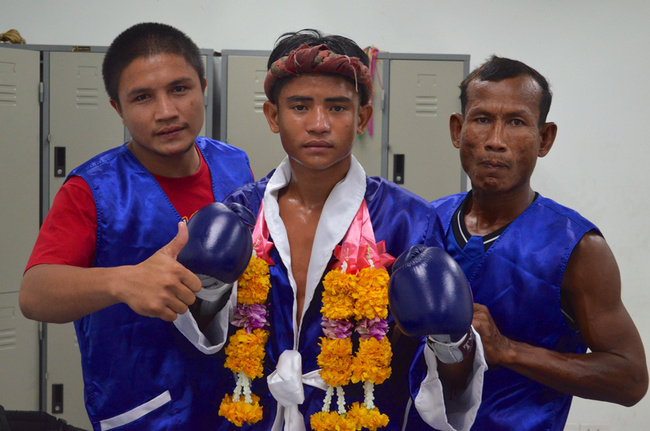 We leave Giatbundit Gym in Thailand’s eastern region of Isaan around 5pm on a Friday, our pickup truck cruising through two-lane highways that cut across rice fields so green they look neon in the sun. Driving us down the Isaan-Bangkok road is Dit, owner of Giatbundit Gym. Crammed next to us in the truck cab are three other middle-aged Thai men. Outside in the truck bed in the open air are two teenage Thai boxers, Tiger and Teep, whose fights scheduled for tomorrow evening at Lumpinee Stadium are the reason for this Muay Thai road trip. Two trainers, Gaw and Com, sit on piles of blankets and keep the fighters company outside behind us. 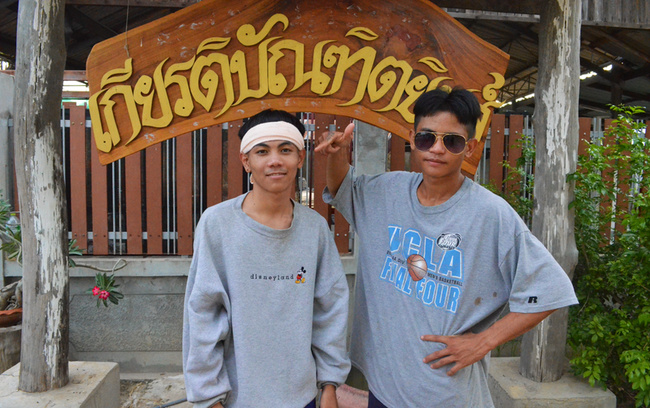 Dit had asked me yesterday if I wanted in on this trip. I’d been meaning to return home to Bangkok for a few days so I jumped at the chance, especially when he told me I could witness the entire Lumpinee check-in process.

“But we’re not going to arrive in Bangkok until midnight, and you’ll have to wake up early because the first weigh-in is at 6am,” he warned. “And then the boys will get IVs. You can watch that too. You’re okay with needles, right?” 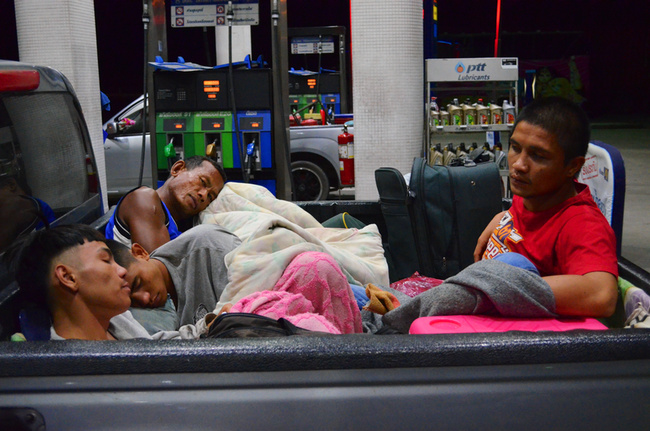 The journey is relatively smooth but for the occasional police security checkpoints and having to slow down for passing herds of buffalo. Three hours into the drive, it starts to rain. Large drops splatter on the windows, and I peer back at the fighters and trainers in the truck bed, huddling under blankets. Shouldn’t they be the ones sitting in the relative comfort of a climate-controlled cab, with my useless ride-mooching ass exiled to face the elements outside?

Just as Dit predicted, it’s nearly midnight by the time we arrive at the hotel. I don’t know how he found it, as it’s tucked away across the wide boulevard from Lumpinee in a maze of little alleyways more twisting than a rabbit warren. “We stay here sometimes,” he tells me. “Nice place, huh?” 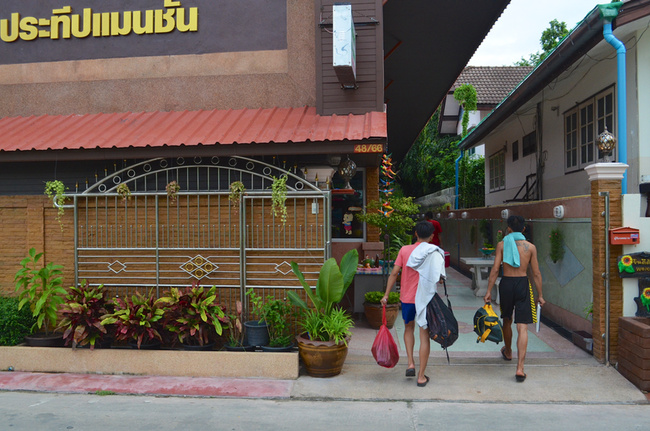 The next morning, Dit knocks on my door at 5:45am and tells me it’s time for weigh-in. Twenty minutes later, we arrive at Lumpinee and park on a small road directly behind the stadium. Other pickup trucks full of fighters and their entourages dot the stadium grounds. There are no signs and little direction, but Dit and the trainers, acting like they’ve done this dozens of times before, know exactly where to take Tiger and Teep. I follow them into the back entrance of Lumpinee, past a Thai man writing and rewriting the fighters’ names on  a dry erase board, to the weigh-in room, where a line of fit Thai fighters strip down to their underwear and step on a rickety scale in front of a pudgy old scale master.

After their preliminary weigh-in, Tiger and Teep move to the other side of the weigh-in room and wait in line to finish the initial registration process. Once that’s completed, they join other fighters outside for some last-minute weight-cutting. It’s about 7am and the boys haven’t eaten or had much to drink since lunch yesterday. They pull on their vinyl Top King sweat suits and run laps around the stadium in between jump rope drills. 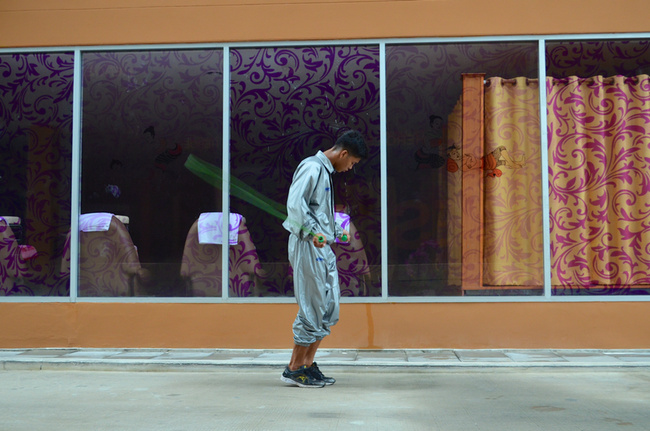 Trainer Com sits with me in the truck bed while Teep and Tiger run by. “They weigh them early,” he says. “It gives them some extra time if they have to cut more weight.” Teep rounds the corner again, his fluffy black hair bouncing with every step, and Com tells me about another fighter this morning who failed to make weight for entry into the Thai Insurance Tournament. “The other fighter couldn’t make weight so he didn’t even show up, but Teep is just one pound over the qualification weight so the promoters asked him if he wanted a shot. That’s why he’s running now. If he sweats out just a bit more, he can enter the tournament.”

About an hour later, the official weigh-in happens. The men return to the same room as before, but this time the fighters step up, completely naked, onto a highly accurate digital scale in the corner where a large Thai man with a booming voice calls out the official weight of each contender. I poke my head around the corner just in time to see a shapely male butt. Bashfully, I avert my eyes and stay in the hallway. Older trainers and promoters see the camera in my hand and, when curiosity overcomes me and I dare a second glance, they quietly form a circle around the nude fighter, thereby cutting down on the chance of his naked photos circulating the internet. 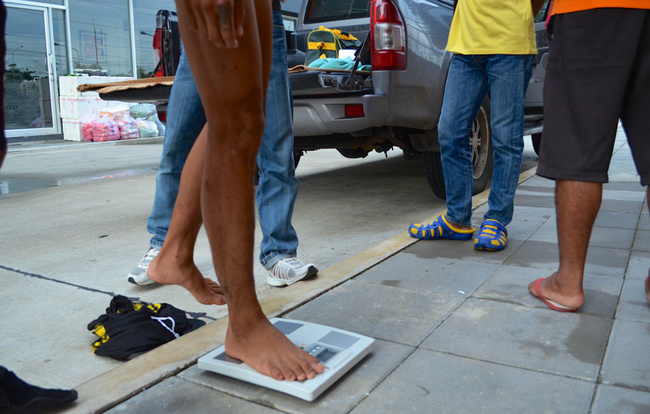 Tiger and Teep barely make the official cut. Both of them had originally been scheduled to fight one week ago, but were informed of the postponement at the last minute. They’d already started the arduous process of cutting weight, an ordeal perhaps more accurately described as running and training despite purposeful starvation and dehydration. Having to prolong the process by yet another week was both a mental and physical blow. By the time they arrived at Lumpinee this morning, they’d both managed to cut about 5kg, or 11 pounds, and for an already slim teenage Thai fighter, 11 pounds is significant.

Eventually, Tiger and Teep are released from the weigh-in room and allowed to eat and drink again. The trainers take them around the corner to Thai food stalls in Lumpinee’s outdoor cafeteria area, where they keep their heads down and consume green curry with no conversation or acknowledgement of anything other than the food in front of them. 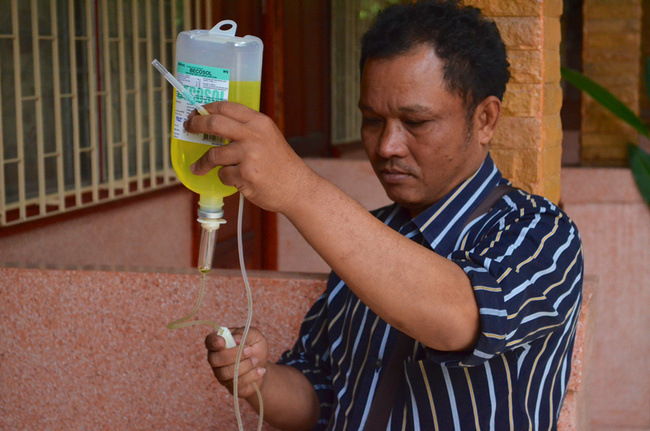 Back at the hotel, the boys retire into their dark room to rest before the evening’s fights. Soon, a middle-aged Thai man I’ve never seen before, accompanied by a young female assistant, arrives with what looks like hospital supplies.

Dit introduces the man to me as Ya, and explains he’s here to give the boys IV drips.

Originally from the same Isaan area as Dit, Ya is a promoter for Channel 7 fights in Bangkok, specifically in charge of sourcing fighters from Isaan. The boys lie listlessly on the bed and Ya places his equipment onto the comforter. I watch as he pulls out needles, cords, and a couple IV bags that look to be filled with concentrated Gatorade.

Tiger goes first. After rigging the IV drip up to the curtain rod above the bed with a shoelace, Ya cleans the crook of Tiger’s arm. Tiger turns his head away and winces as Ya’s gloveless hands insert the needle under his skin. After successfully connecting the first IV drip, Ya turns his attention to Teep’s arm and repeats the process. Both boys are hooked up to IVs within a few minutes. 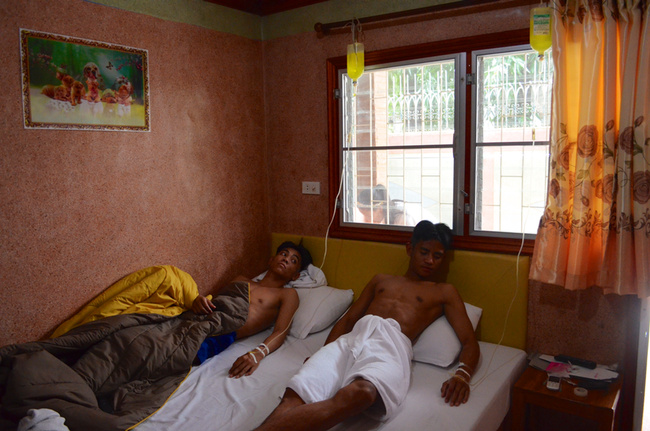 Two hours later, around 3:30pm, the IV drips are finished, Ya and his female assistant are long gone, and the boys are shadowboxing outside the hotel rooms. Dit rounds us up and once again we all pile into the truck to head back to Lumpinee.

Before the fights, Dit stands with me for a few minutes and talks of life on Muay Thai’s Isaan-Bangkok road. He laments how expensive these long-distance trips to the capital are for his small provincial gym, describing how the fighter’s purse often isn’t enough to cover much more than gas.

I ask him about the practicality of taking fights far from Giatbundit’s Isaan location, and he shrugs in response, explains it’s just something that has to be done. “If you want your fighters to have a career, to have a future in Muay Thai, you have to be willing to take them to Bangkok. I’d even take them up to Chiang Mai or down to the islands if they found a good match there.” 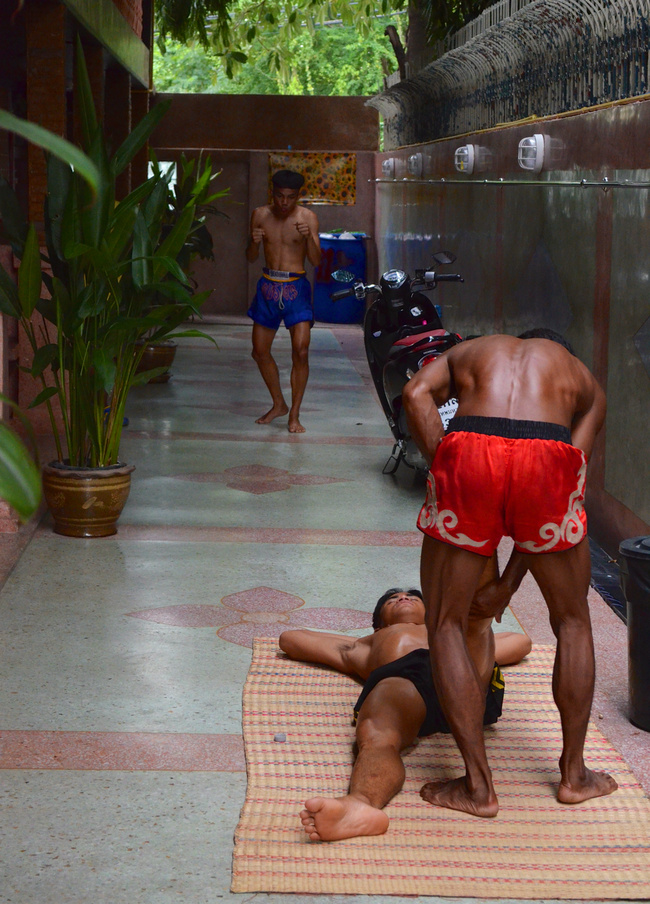 The fights proceed as planned, Teep competing early in the evening and Tiger a few hours later. In the end, though, despite two weeks of weight cutting, a half-day of driving, and an afternoon hooked up to IV drips in a dark hotel room, both fighters lose their matches. They quietly pack up their gear and slip into their places in the pickup truck, ready for another six-hour ride back to Buriram Province.

Before saying goodbye, I thank Dit for letting me hitch a ride and offer to chip in for gas. Despite the double loss tonight, he still smiles and makes jokes with the other trainers and promoters backstage. “This is how Muay Thai is,” he explains before I leave. “Sometimes we lose money, which is hard for the gym, but you have to focus on the fighters. The fighters have to be happy in order to be successful. If they’re not taken care of at the gym and given good fighting opportunities, then they’ll never make names for themselves and your gym will fail. That’s what you try to do as a gym owner—provide for your gym’s future by providing for your fighters’ future. Your gym is your fighters, they’re inseparable.” 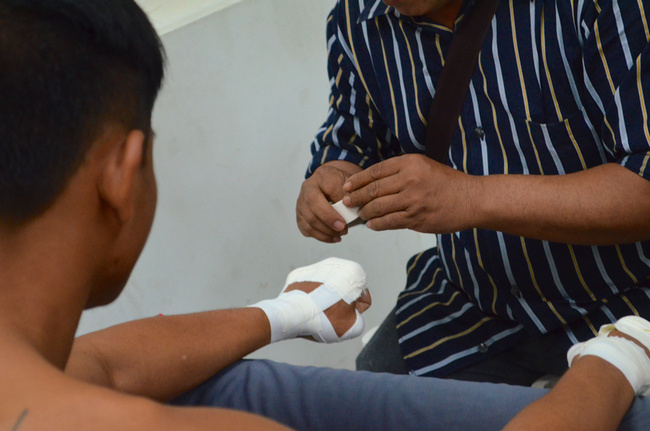