An American in Thailand: My Muay Thai Love Affair 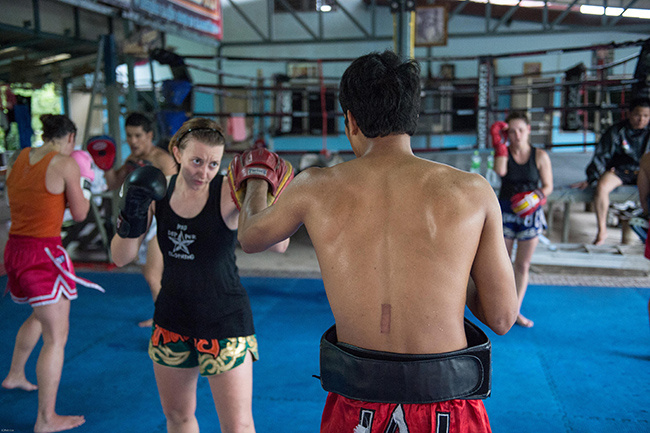 It's Glai's 15th birthday today and I'm hanging out by the ring toward the end of training. He's putting his shoes on near me, about to go running with the other Thai boys. I say happy birthday to him and tell him that it's a special day for me too, because one year ago today was my first day training at this gym. He smiles widely then asks me when I'm leaving Thailand. I say in three months. "Wait, are you coming back?" he asks worriedly.

Oh, this is so heartwarming! Over the year, he's become the darling little brother I never had.

"Of course I'm coming back!" I reassure him. "You think I'm going to leave you?"

Yeah, definitely the bratty little brother I never had. 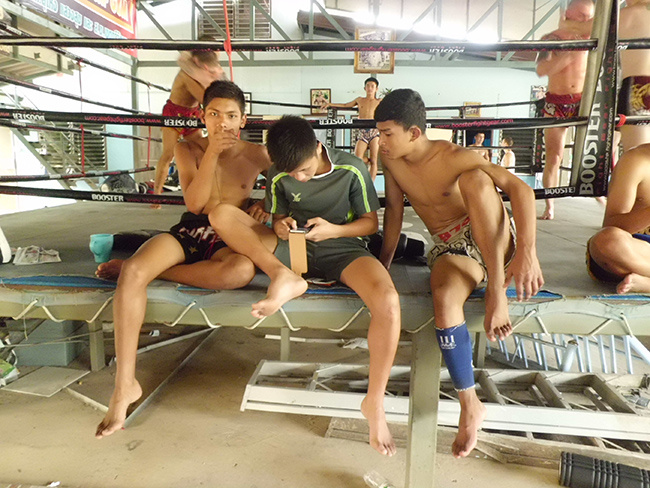 Glai runs off and I'm left sitting on the ring, watching other people finish training. I made it a year. Most people don't make it more than a month or two. That's because most people have lives and responsibilities and real jobs back home. Most people aren't going through their "second adolescence," as my mother calls it.  I never expected to stay this long. The plan was to spend three months training in Thailand between job contracts. A couple months into my stay, I ended up blowing off my next job contract, surviving off the money I'd made from selling my car before I left the U.S.

I read all the blogs I could find on training in Thailand. I spent hours researching different camps, trying to find a good fit. I had ideas in my head about what the Muay Thai life would entail. Fantasies, really. Most of them included me being a tough, respected addition to my gym, with a body that wouldn't need airbrushing to be featured in a magazine. I'd never wanted to be a fighter when I was growing up, but maybe now, even at the late age of 29, I'd embark on the journey to become a champion. 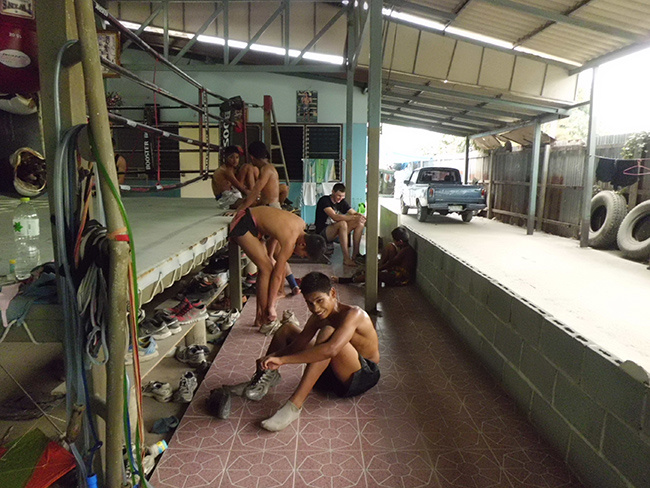 I’d started Muay Thai back in 2007 when I was 23 and trained at gyms in Beijing and Los Angeles off and on for a few years. The classes were structured so that students would work in pairs, taking turns holding pads for each other while instructors taught combinations. I pretty much never sparred, at least not for real. On the rare occasions that I did spar, if you could even call it that, I would do things like throw elbows when I was so far from my opponent that I was outside kicking range. Onlookers might have surmised that I was trying to intimidate my sparring partners, but I just thought elbows were cool, and I had no idea what the hell I was doing. Somehow, though, I convinced myself that I was actually somewhat decent.

It took moving to a gym in the rural outskirts of Bangkok to make me realize just how much I'd been deluding myself. Now the people around me are athletes whose careers demand constant training and the risk of serious injury for each paycheck, not the weekend warriors or soft housewives from my previous gyms. I trained here nearly a month before they allowed me to start sparring, and when those little pre-teen nak muay that I outweighed by 50 pounds started throwing me around like a rag-doll, I was quickly appalled at how little credit I'd previously given those who master this art. In the U.S., I thought of myself as Lindsey, Muay Thai enthusiast. In Thailand, I'm Linsee, Muay Thai dork.

I was dying through my first few weeks at the gym. The heat and humidity felt like a warm, welcoming bathtub when I'd stepped off the plane in Bangkok from a winter spent in snow and ice, but during training that same air felt like chowder. I sweated constantly. My shirt would already be half-soaked just from the short walk over the train tracks down the dirt road to the gym. Skipping rope was a joke and I couldn't believe they actually expected me to be able to do it for a half hour. I had to take breathers every couple minutes. During actual work with a trainer, I could barely get through two pad rounds without feeling dizzy. I'd be doubled over trying to catch my breath, glossy beads of sweat dropping off my nose onto the mats, regretting the whole idea of training in Thailand. And all the while my trainer would be standing there looking off into the distance, not at all concerned, waiting to continue holding pads for this latest ill-prepared Muay Thai tourist here to play with the big kids for a few weeks.

But from the bottom of the class, there's nowhere to go but up. I did my best to ignore the climate's effects, shrugged off the soreness and pain, and kept showing up. Pad-work stayed challenging but soon I was able to make it through five rounds without seeing black spots. The Thai boys warmed up to me; gym antics began. I found myself indulging in their games, chasing them around playing tag at the end of training, or fighting like puppies with the smaller ones. The Thai trainers and other foreign fighters slowly started engaging me in conversation, assuming maybe I'd stay for any length of time that would make an investment of friendship worthwhile. My arms finally stopped shaking involuntarily when I was eating dinner.

The second month, the gym became my whole life. The psychological effects were intense, almost as if I were in love. I'd walk around town in between training sessions in a daze, just thinking about Muay Thai and all my plans for our future together. I'd look forward to going to sleep every night only because it meant I was that much closer to waking up and training again. I started searching for literature on combat sports, tried to find people with whom I could relate. I heard an American boxer named Tyrieshia Douglas talk about her sport on a podcast called Women Box. "Boxing is is my mother and my father," she said. "Boxing is my brother and my sister. Boxing makes love to me, boxing kisses me. Honestly, the love of my life is boxing." This was the first time in my life that I could even begin to understand.

In the beginning, it was all good days; everything was new and shiny. Half a year into it, the challenges came. Chronic pain. Exhaustion. Isolation. Doubt. Now there are good days and bad days, days you want to say here forever, days you wonder why you even bother. Muay Thai is not a consistent lover. For months I had an inkling, a vague sense of dread at the back of my mind that Muay Thai would somehow break my heart. I had no idea what that meant, but I'd find myself hobbling away from training, limping from whatever new injury I had, thinking about Muay Thai and repeating to myself or to whoever was listening, "Please don't take this away from me. Please don't take this away from me."

A year into this life, just one short year: Long enough to show me everything I will never be. 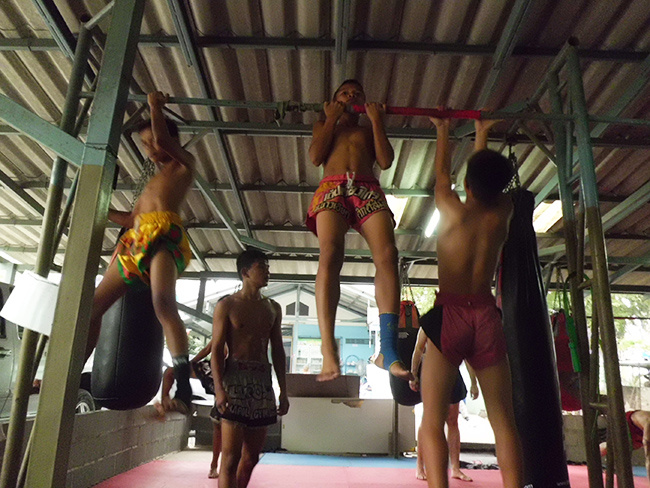 I snap out of my anniversary reverie and back into reality when my friend Carter from Australia comes over and sits next to me on the ring. It's his first day here, exactly one year after my first day. Gong, my main trainer and closest friend in Thailand, runs over to meet him. He remembers Carter's ex-girlfriend Rianna from the one short week she was here six months ago and probably wants to know if Carter is as crazy as his ex was. Most foreigners come and go quickly, but some of the wilder, louder, funnier, or sluttier ones make real impressions on the trainers. Rianna, with her speaking voice closer to a yell, her blatant refusal to run or skip rope before training, and her constant whining to Gong to let her borrow his motorbike had obviously made an impression.

Gong sizes up Carter, introduces himself, and they shake hands.

"Okay, I train you tomorrow."

Gong waves his hand dismissively, says he no longer cares about training me and will now focus exclusively on Carter's Muay Thai development. Apparently our training relationship has run its course and Gong has found a new gym-pet. 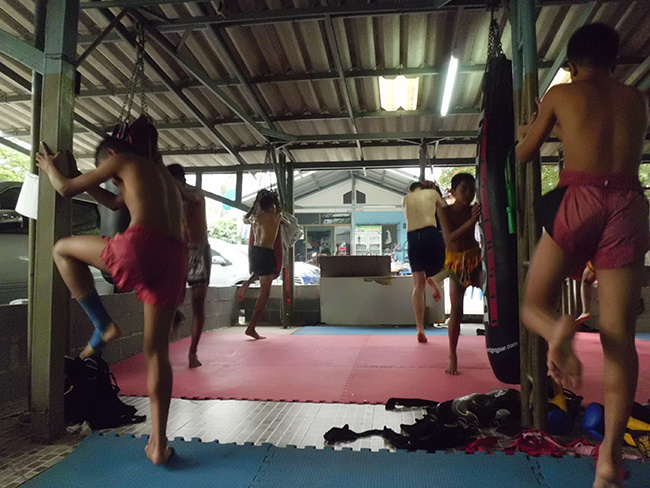 The next morning I see birthday boy Glai again at training. He runs over to me when I arrive, says in Thai, "I hate you and I can't wait until you go back to America! But why didn't you come to my birthday party last night? I wanted you to be there!"

"Ugh, Linsee. You never know about anything!"

That kid has no idea how right he is.

Another year of delusion comes to an end. Happy anniversary to me.

And check out these earlier installments of "An American in Thailand":

Requiem for My Fitness

Giving Your Life to Muay Thai