An American in Thailand: The Fighting Circus of Phuket 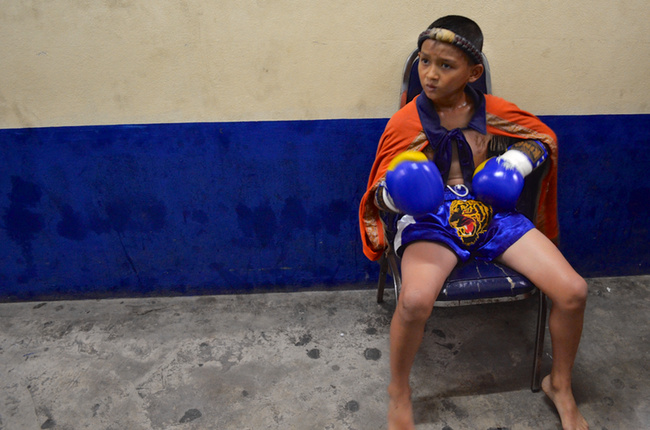 If Lumpinee fights are like the Indy 500 of Muay Thai competitions, then fight nights in Phuket are like NASCAR meets a carnival sideshow at a rodeo. You just have no idea what you're going to get.

The Singpatong boys and I arrive at Patong Stadium around 9pm, after spending a few hours promoting this very show from atop the Muay Thai billboard-truck around the streets of Patong. This is the third Saturday night I've spent at Patong Stadium. All the matches have been so different, some with such quirky competitors, that it's like a Muay Thai variety show.

I follow the Singpatong group into the back changing area where the fighters are getting prepared. One of the little boys from the gym is competing in his first full-rules fight tonight. I think his name might be Pong, but I've met about 30 kids here the past few weeks and I'm only completely sure of about five of their names.

Little Pong sits quietly in his shorts, gloves, mongkon headpiece, and pre-fight cape backstage. He smiles at his coaches and other friends who pass by, only occasionally looking a bit anxious. Other Singpatong boys and men are getting their hands wrapped nearby in preparation for their own fights. 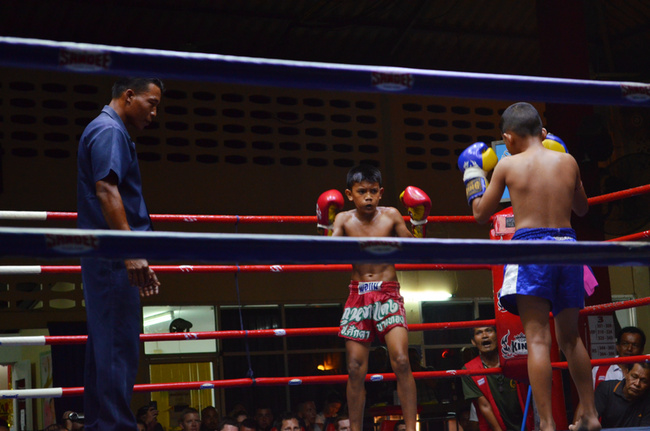 I take my seat ringside with the rest of the Singpatong crew, right next to a blonde Canadian woman named Michelle, the gym's "camp mom" and wife of the Thai co-owner Num. Pong emerges from backstage for his fight and enters the ring. Fighting against him tonight is a little boy of a similar age and weight. The other boy holds his head high, visibly more self-assured.

Both boys perform the wai kru prior to the fight, but Pong's opponent takes it one step further with his ram muay, acting out a classic Muay Thai interpretive dance of shooting Pong with an imaginary bow and arrow. Pong stands there, arms by his side, looking vaguely perplexed. 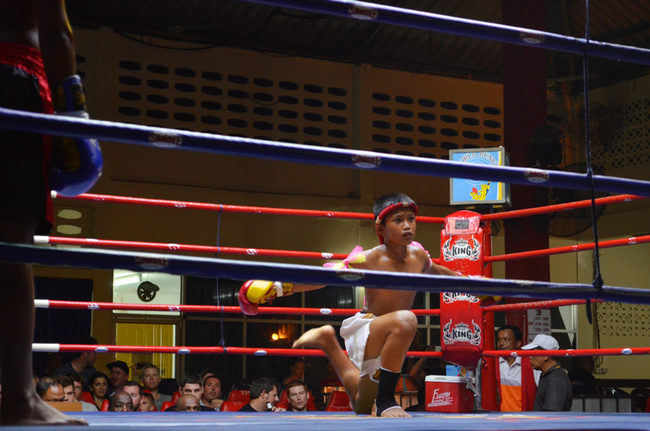 The rounds tick by. Pong shows heart, but his opponent shows aggression and confidence. The women and children high up in the stands behind me cheer frantically each time the boy in white shorts lands a solid strike or manages to sweep Pong. They make such a ruckus up in the stands that Michelle and I turn around at the same time. Watching them cheer wildly is even more entertaining than the fight. 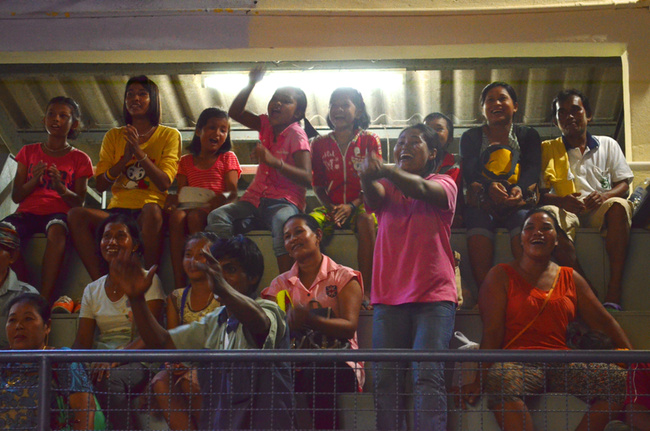 Michelle whispers loudly into my ear over the din, "This is just like when we had a Thai girl competing here a while ago. Her mother was a hairdresser, and for her first fight, their entire family came, plus all her mother's clients, who were mostly "ladyboys." They all had their hair and makeup done really nicely, and they were basically freaking out in the stands the entire time, going, 'Owah! Owah!' and flailing their arms every time there was a kick or punch."

In the end, Pong loses the fight. Backstage, however, he seems fairly upbeat. He poses for pictures, and his older nak muay brothers tell him he did well for his first fight.

Next up is my boy Deet. He's about 18, looks a bit like Nick Cannon, and we've been having some good conversations lately atop the promotional billboard-trucks. Many of the fights at Patong Stadium involve at least one foreigner, but Deet's fight is between two Thais. The Singpatong section where I'm sitting goes crazy during the rounds, especially the cornermen. One of them is Deet's 15-year-old brother Tee, who screams incomprehensible instructions at his big brother through the duration of the fight.

Amid this cheering storm I spot a couple men on seats nearby. One is texting nonstop on his smartphone, totally oblivious to the fight that's causing so much commotion among our section. A man a few seats away is also so uninterested in the Muay Thai madness that he's actually sleeping. Anyone who can sleep ringside through all this yelling and screaming, not to mention the fight music played live by the traditional Thai band, must be seriously sleep-deprived. 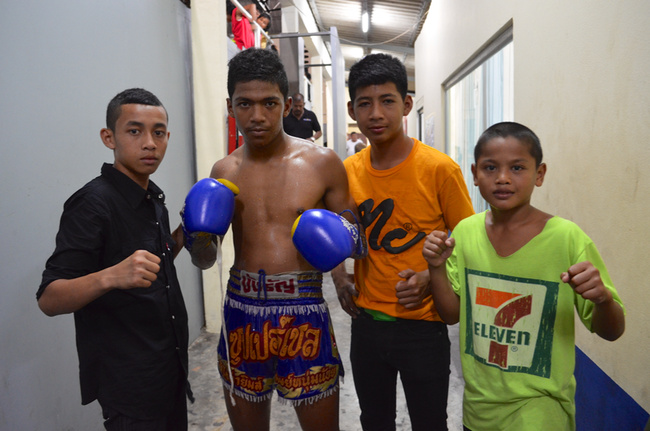 One of the last fights is between a huge foreign man with a triumphantly large hairstyle and a legit-looking Thai fighter. The Thai fighter is tall and muscular, but his size is nothing compared to the foreigner, who is nearing the cusp of obese. I recognize the latter from the banner on the side of the billboard-truck tonight. Under his picture it said "Heavyweight Superstar."

"Is this for real?" I ask Michelle.

"Oh yeah, the big guy is kind of famous around here. He fights quite a bit." 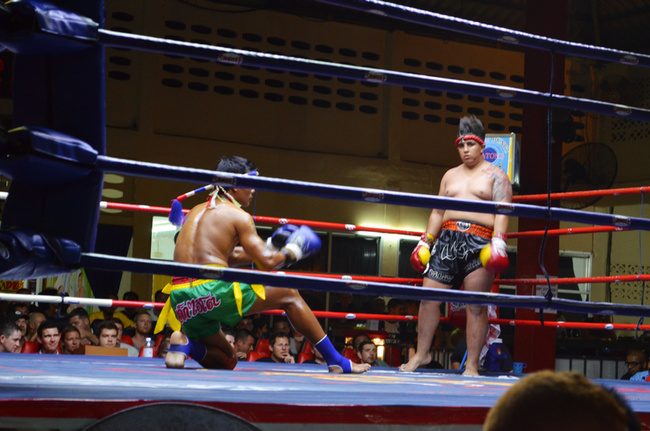 The "heavyweight superstar" jumps right into the fray as soon as the bell rings. His form is unexpectedly decent, and, for a portly fellow, he is rather spry.

"He's an actual fighter," Michelle continues. "You wouldn't guess by looking at him, but he trains pretty regularly, I've heard."

"Wow… But if he trains so regularly, how is he still that big?"

"That's a good question," she laughs. "I'm not sure. You remember that fight from last time you came? The Fat Boy Fight?"

She's referring to a fight I saw last time I was at this stadium. One of the opponents was an early middle-aged white fellow with long braids, and the other was a corpulent Russian man from Singpatong.

"The Russian guy, well, he's lost about 50 pounds since he started training at Singpatong, but he's still huge. I don't know how much more he's going to lose on his training schedule, though. He doesn't run much. He has a lot of power, but he always has to go for a K.O. by the end of Round Two, or else he loses endurance and gases out if the fight goes much longer than that. This guy up here," she says, pointing to the large-haired, large-bodied fighter in the ring, "I think he has better endurance. He must run a bit, like the Thais."

"The Thai guy? He used to fight in Bangkok all the time. Actually, I think he's a former champion."

I'm about to ask her what the hell a former champion is doing fighting in Patong, but then I think of my main trainer Gong, a stadium champion five years ago in Bangkok, now working as a full-time trainer and taking the occasional fight down south in Koh Samui for some extra money.

Is this one of the natural career arcs of successful nak muay? Training all their childhood, rising in the competitive ranks, graduating to Bangkok fights and perhaps winning titles, then declining in the face of a new wave of fresh, young talent. The pay and the glory certainly aren't comparable to fighting in major stadia in Bangkok, but at least matches in second-tier places like Phuket and Koh Samui require a far less regimented training schedule, with not nearly as much pressure for the paycheck. 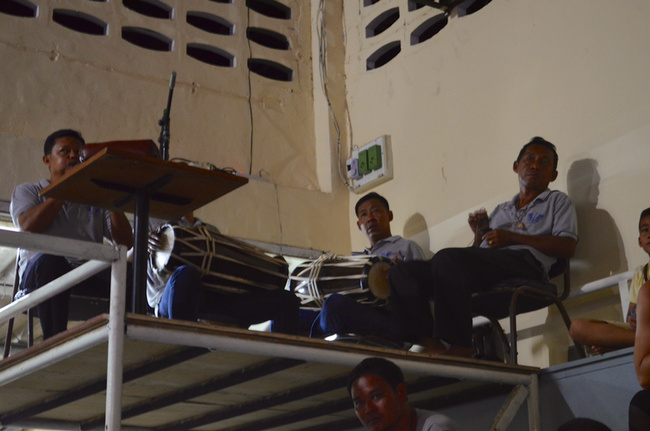 It's sure better for the integrity of the sport in Phuket to have former champions as contenders, or for that matter, any fighters who actually train Muay Thai, rather than the Thai taxi drivers who allegedly take fights against foreigners simply for the guaranteed money.

Num, the co-owner and manager of Singpatong Gym and the promoter of all the Saturday night fights at this stadium, has a policy of keeping the matches real. "We don't put people in the ring unless they are real fighters who actually train," he told me earlier today. "Go to the other fight nights, and you'll see the difference." 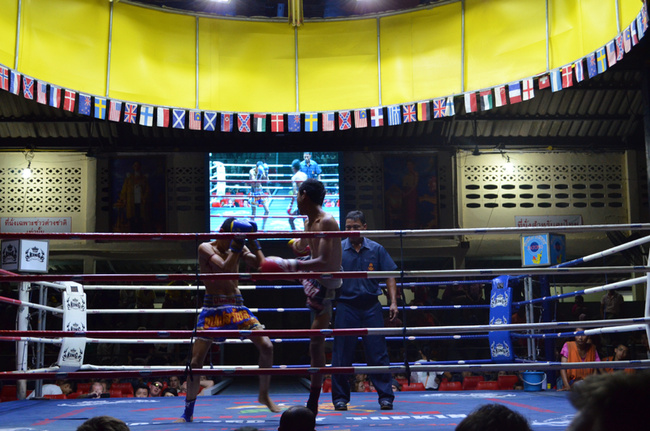 Talk to any Muay Thai old-timer in this area and they'll tell you the problem of mismatched and inauthentic fights is an epidemic in tourist-heavy places like Phuket. I've heard this scenario described many times before: It starts off with a westerner coming to Phuket for some training, and then deciding to take a fight. The gym in question works with promoters, sometimes resulting in matches that are completely legitimate, with both parties actively seeking a win.

However, not all the matches are on the level. The common story is of a Thai taxi driver, who might have trained Muay Thai when he was a kid, taking a fight against a foreigner just for the extra cash. Predictably, the foreigner wins and posts photos of the victory on Facebook. Everyone comes away on top: the foreign fighter realizes his dreams of defeating a Thai in Thailand, the taxi driver masquerading as a fighter gets a nice bonus to his normal salary, and the gym gets free publicity and loyal customers.

Fixed fights can be big problems in the elite levels of Muay Thai, sometimes resulting in fighters getting temporarily banned if even suspected of throwing fights. But Phuket is far from the rings of Bangkok. It's a different economy down here. Now, the business aspect of Muay Thai, which has always driven the sport, is adjusting to the ever-increasing influx of foreigner fighters, tourists, and their money. The effect this is having on the sport is only recently starting to become apparent. 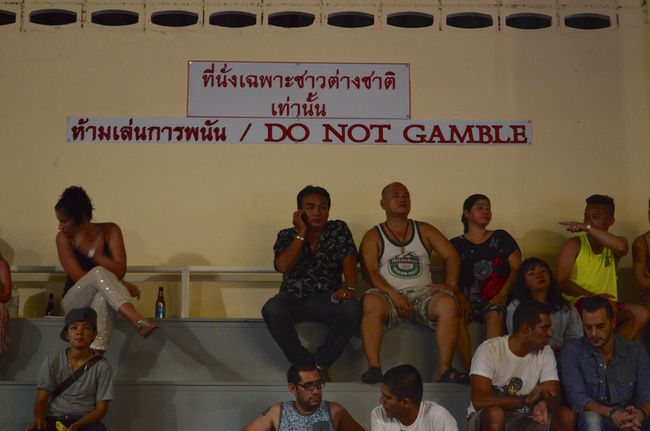 Towards the end of the last fight, Michelle's British friend Chrissy stops by, bringing along her new boyfriend, a Thai-Burmese Patong bar boy. I've heard endless stories since coming to Thailand about western men falling in love with Thai bar girls. Apparently, it happens when the genders are reversed too. She gushes how in love with him she is, and speculates on how difficult it may be to get him a visa for England, especially seeing as how he might be a Burmese refugee without a valid passport.

"But I don't know," she says. "I can't really talk to him. He says he speaks five languages, but English isn't one of them."

She asks me to help interpret for them, right there in the ringside seats during the big Thai vs. bigger foreigner match. I slip into my shaky Thai but it's loud in the stadium, his answers seem circular, and we don't really get anywhere.

Chrissy purses her lips. "I'm going to have to get an interpreter tomorrow and find out his nationality status."

I turn back to the fight. The heavyweight superstar with the victorious hair is taking on a Thai ex-champion up in the ring. Through it all, multi-generational families are hooting and hollering up in the stands, kid-fighters are playing backstage, and an English-- possible-Burmese-refugee couple are holding hands on a Muay Thai date. All that's missing from this fight circus is a popcorn-and-peanuts seller.

An American in Thailand: Back to Basics at Meenayothin