An American in Thailand: The Life of an Ex-Champion 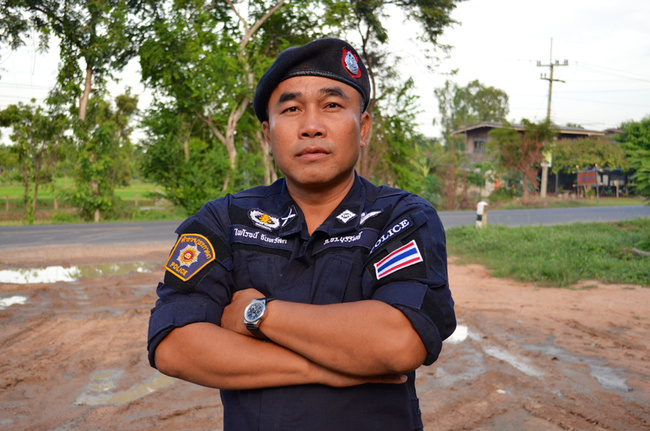 On a Tuesday evening in rural Isaan, a truck parks in front of Giatbundit Gym and a Thai police officer steps out. When he enters the gym, the young Thai fighters immediately pause their sparring and bag work to greet him, pressing their hands together in front of their faces in the respectful Thai wai.

The police officer looks slightly familiar but I can't quite place it until I pass the gym's trophy case. Propped up are candid photos and professional portraits from magazine covers, faded with age, most of them featuring the same man.

"Frances," I call out to the blonde woman standing a few feet away. I point to some photos of a Thai fighter holding trophies and wearing championship belts, and ask if it's the policeman.

"Yup," she confirms. "That's Rotnarong, Rajadamnern champion from about 20 years ago. He was awarded the Royal Cup two years in a row, which is a pretty big deal. It's awarded to only one fighter per year, one out of the thousands of fighters in Thailand. To my knowledge, he was the first fighter to receive it two years in a row. It's basically the biggest award you can get, like saying that among all the champions at that time, you're the best.

"Also," she adds, "he says he's the one who came up with the Saenchai cartwheel kick."

"You mean Saenchai didn't come up with the Saenchai cartwheel kick?"

"Come on," she laughs. "He'll be off work soon. I'll take you to his house to meet him, and he'll tell you all about it." 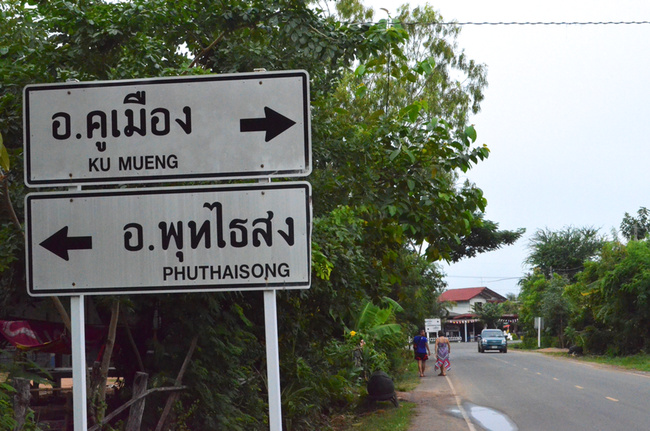 On the way to his house, Frances talks about the effect Rotnarong has had on the young Muay Thai fighters in the area, including her husband Boom, a fighter raised in a tiny village nearby. "A lot of the Thai fighters around here idolize him because they can all relate to him. He's known as a 'people's champion.' He didn't come from a top gym, didn't have particularly supportive promoters backing him, but he still achieved so much. He's also made something of his life after Muay Thai: he became a policeman. He has his life together, he's outgoing, and very down-to-earth. I love when he comes to the gym because I think he sets a great example for the younger fighters." 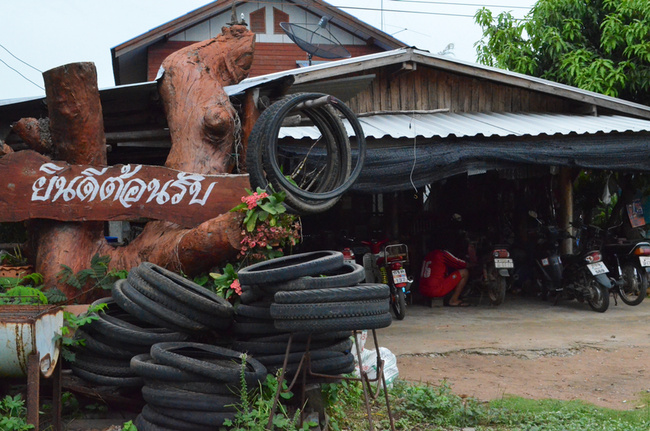 Frances walks me around the corner down a pleasant side street lined with houses. A group of women relaxing around a table notice my camera and computer, and Frances explains we're here to interview their neighbor. When Rotnarong emerges from his mother's small shop across the way, the women clap their hands and start heckling him good-naturedly.

"Hope you're not drunk for the interview!"

Frances laughs along with them. "He's a policeman, so everyone is extremely respectful of him in town, but here in his village they call him by his nickname and tell him not to be a drunk-ass."

"Come here!" one of the women beckons to him. "Let me make you beautiful for the camera!"

Rotnarong takes a seat at the table. "Sorry I don't have any flowers, but how about this for your hair?" she says, trying to fit a mushroom behind his ear. Her friends laugh so hard they start wiping tears from their eyes. 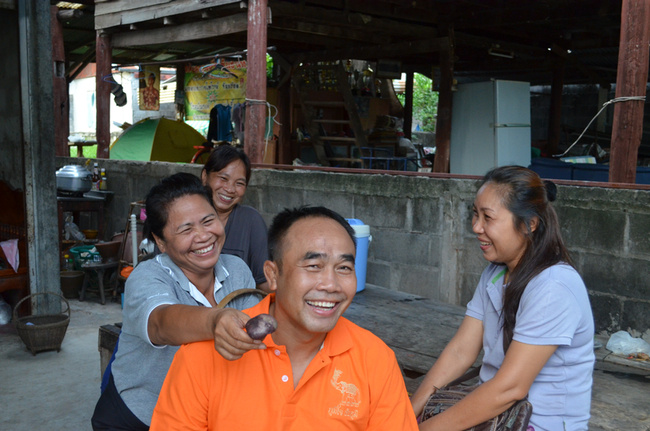 Once we manage to move to Rotnarong's house next door, I walk around admiring his seemingly endless trophies and medals while he hangs up his police uniform.

"How long have you been a policeman?" I ask.

"You know, police work around here is simple compared to Muay Thai." He leans in close when he says it, like he's telling us a secret. "I like being a cop especially here in the countryside as opposed to Bangkok. My job is fairly straightforward—I'm given a timeframe and a certain amount of tasks to complete, and I do my job.

"Muay Thai was more challenging for me. It's harder on the body, of course, and also harder on the brain. There are things you have to do as a fighter that you think you can't do, but you still have to do them. Like cutting weight, for example. Or fighting that extra round when you have cuts above your eyes and blood running down your face." 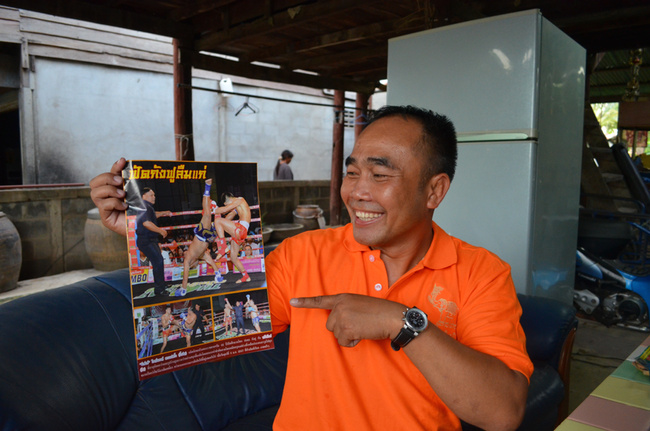 Rotnarong flips through his photo album and takes out a magazine page of himself performing a cartwheel kick in the ring. "You see this? The cartwheel kick? Saenchai made it famous worldwide, but as far as I know, I was the first one who used it in a stadium fight.

"I'm serious!" he says, noticing my skeptical expression. "I used to play takraw in high school. You ever heard of takraw? It's like volleyball, but you play it with your feet, and you get really good at these high kicks. Saenchai was also a takraw player, by the way.

"Anyway, this was back in 1993. I was at Rajadamnern Stadium, fighting someone named Thailand Pinsinchai. I'd already beaten him three times before. This was our fourth fight. By the fifth round, I knew I'd already won the fight so I just put my gloves down on the ring floor and threw out a cartwheel kick, just to see what would happen. Well, I landed it on the first try. And it actually worked!

"I'd never practiced it before, never even thought about it. I just did it instinctively that one time in the ring, and it kind of surprised me. I couldn't believe I'd pulled it off without falling. No one had ever seen that before. The crowd went nuts, and I just thought to myself, 'No problem, I can do this all day!'

"Then I started practicing it in the gym and incorporating it into a lot of my fights, mostly to try something novel. I'd feel out my opponent, and I'd do it as soon as I was confident I'd won the fight, even as early as the first round." 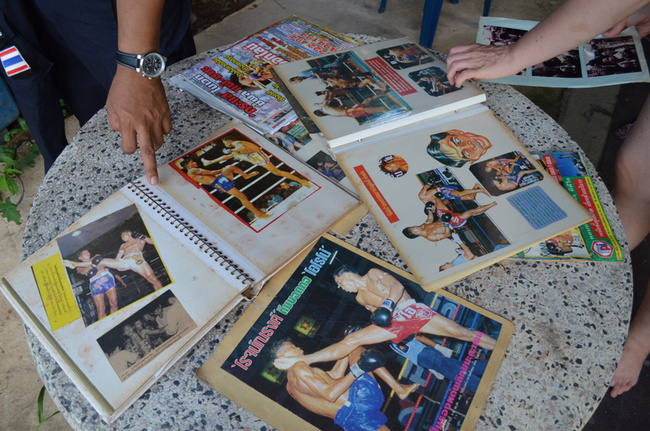 "Wait," I ask, "so if I were to ask Saenchai where he got that technique, would he say it was from you?"

"Yeah!" Rotnarong grins. "Sure he'd say it was from me! Whenever I see Saenchai do a cartwheel kick on TV, I call him and say, 'You used my kick again! Dinner and drinks are on you next time!'"

When I ask why Saenchai is given recognition for the cartwheel kick, Rotnarong proposes that it's due to Saenchai belonging to a different era of Muay Thai. "The time when I was fighting was called the Golden Era of Muay Thai here," he explains. "The rest of the world was so far behind our level that there was no point in bringing Thai fighters out to compete internationally, because who would they fight? Saenchai is part of a new generation of fighters, and many of them are as talented as those of the Golden Era, but the reason they're so famous internationally is because the rest of the world has caught up. There's more interest in Muay Thai on a global level, and current fighters like Saenchai have been given more exposure on TV and the internet. It's just a different world now.

"Saenchai is like a little brother to me," he continues. "This past April we had a fight here in Buriram. It was just a three-round exhibition, but as a joke the ref raised my hand at the end as the winner. As fighters, I think Saenchai and I were on par with each other in our respective primes. Now, though, I'm fat and out of shape, but Saenchai is still a professional fighter." 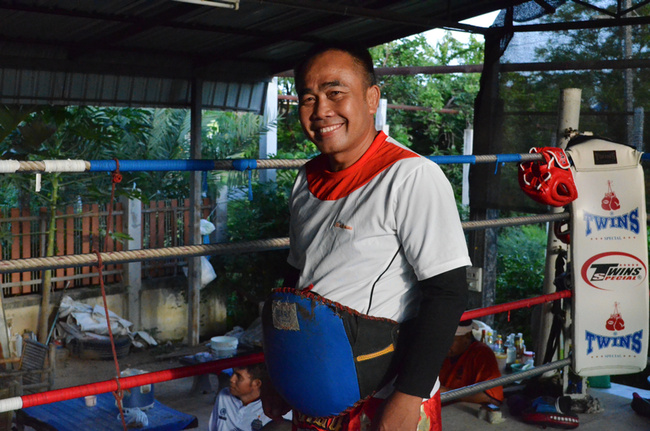 Despite being in his early 40s and working full-time as a policeman, Rotnarong still takes fights every so often. "I train a bit starting about four days before a fight. I just have to train for fitness, get my cardio conditioning up, but fighting is like riding a bike—the skills are still there. They never leave you."

"How much longer will you continue fighting?" I ask.

"As long as I still have opponents and there are still bets to be made," he laughs. "I'll probably retire in two or three years, though if I'm still offered proper matches with opponents around my age, I'll keep fighting. You know it's all based on the gambling, anyway. I took a fight in Lumpinee late last year with a one million baht side bet (US $31,250). Out of that million, my mother put 50,000 baht (US $1,560) on me. I was matched up against another famous fighter from the Golden Era. Actually, now that I think about it, there was an even bigger bet the year before placed on one of my other fights, 1.2 million baht (US $37,500). That was at Rajadamnern Stadium too."

"Yeah, both of them," he says quietly with a shy smile. 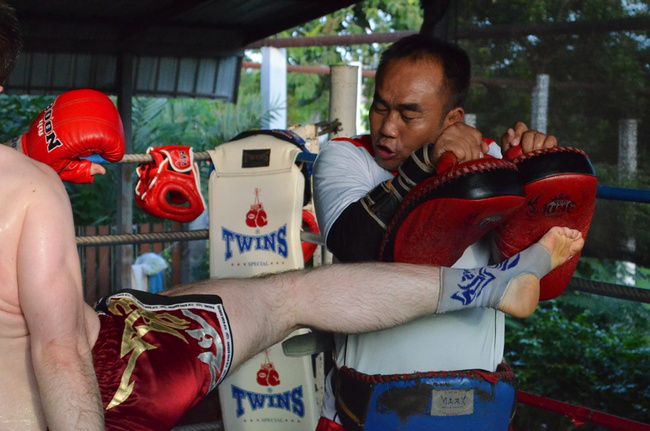 I ask him what's next, what his dreams are for his future, and whether Muay Thai will play a role.

He tells me animatedly how he'd like to open his own gym behind his house, and teach seminars abroad. "I'd love to teach abroad, then invite my new foreign students to come train in my hometown too. It's a great feeling, to be able to pass on my knowledge to the next generation of fighters."

When I ask him what advice he has for young fighters, he pauses a moment before he responds. "It's very important to learn how to manage your money," he says carefully. "If you're a successful fighter making money off Muay Thai, you need to save, and to spend wisely.

"That's probably my biggest regret, not being better with my money. I wish I hadn't spent so much on people who aren't in my life anymore. So I guess my main advice would be to take care of yourself, take care of your family, and save your money." 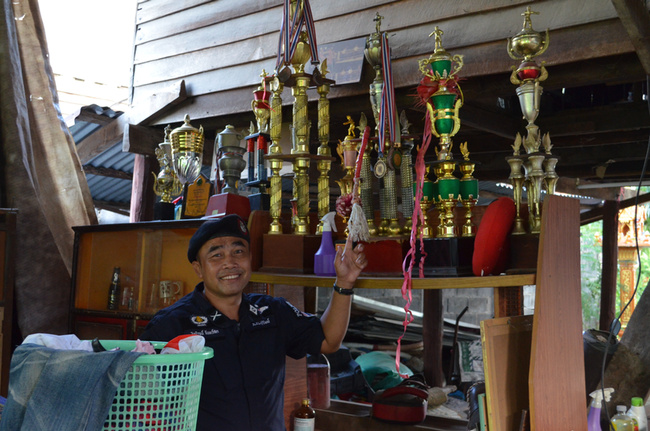 After the interview, Rotnarong waves goodbye from his front yard, and Frances and I walk back to the gym. "He's not your typical has-been champion fighter," she reflects. "A lot of champions fade. They become depressed, frustrated with Muay Thai. A lot of them don't do much of anything with their lives after Muay Thai. I think what's so remarkable about him is how much he's still so in love with the sport. He doesn't even call it a sport half the time; he calls it an art that you can use to better your life. It's very comforting to be around someone who's been through every up and down with Muay Thai imaginable, yet still loves it. It's really wonderful to have someone like that in my life."

An American in Thailand: The Queen's Cup